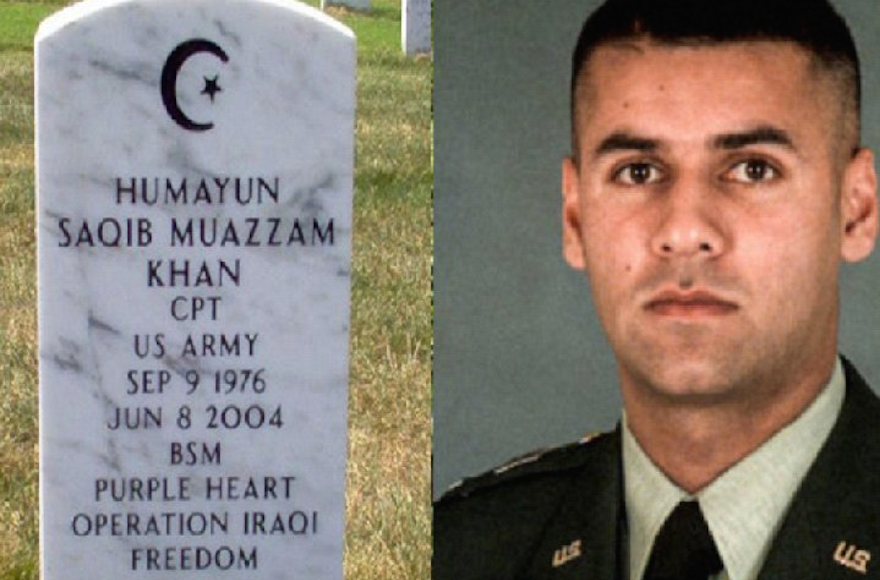 Capt. Humayun Khan, whose parents have spoken out against Donald Trump, was killed in Iraq. (Screenshot from Twitter)
Advertisement

In a tweet that has gone viral, an Orthodox Jewish immigrant dedicated his vote to Capt. Humayun Khan — a Muslim American soldier killed in Iraq.

Yosef Rapaport, who, according to his Twitter bio, consults for Agudath Israel of America, told the Washington Post that the idea came to him Tuesday morning.

“I would probably not agree politically with Capt. Khan if he met me and we talked about world affairs,” Rapaport said. “I don’t know. I can’t be sure. That doesn’t diminish one iota the deep respect I have for him and his family for what they did for America. We owe them our deepest respect.”

I'm an Orthodox Jewish Immigrant My vote is private. Dedicated in honor of US CPT Khan, his devotion makes (religious) freedom possible pic.twitter.com/httaaUspeM

His tweet has been liked over 17,000 times as of Tuesday afternoon.

Rapaport, 62, is Hasidic. He immigrated to New York from Montreal 40 years ago. Both his parents and his wife’s were Holocaust survivors from Hungary.

He told the Post that the rhetoric against Muslims in this election cycle has disturbed him.

“When there’s an attack on one religious group it means my religious liberty is diminished,” he said.

Khan served as a captain in the Iraq War and was posthumously awarded a Purple Heart and a Bronze Star for saving fellow soldiers from a car bomb.

His parents made an appearance at the Democratic National Convention in July. In his speech, the slain soldier’s father, Khizr Khan, excoriated Trump and challenged him to read the Constitution. In return, Trump blasted the Khans, saying that wife and mother Ghazala Khan didn’t speak at the convention because she “wasn’t allowed to have anything to say.”

For his part, Rapaport told the Post he can’t wait for Tuesday to be over. But the reaction to his tweet has been a bright spot in an otherwise bitter campaign season.

“The people who write me in response,” he told the Forward, “it brought me to tears. It’s what makes me proud to be an American.”