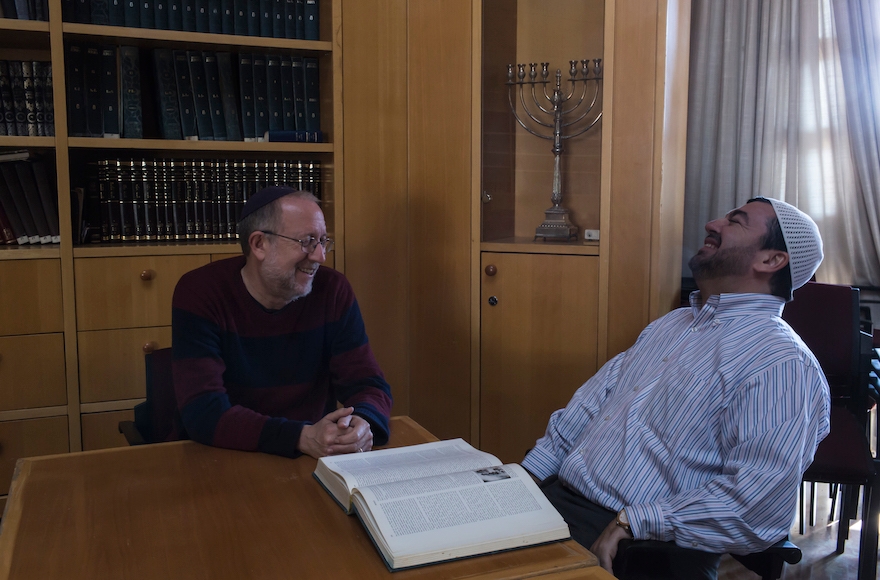 (JTA) — For years, whenever Jews and Muslims engaged in dialogue and activism together, it usually concerned — or foundered — on one issue: the Israeli-Palestinian conflict.

With Donald Trump’s ascent to the presidency, that appears to be changing. Regardless of what’s happening across the ocean, Jews and Muslims in the United States are joining together to fight for shared domestic concerns.

“It is a perhaps growing recognition that [the Israeli-Palestinian conflict] cannot define how American Jews and American Muslims relate to one another,” said Rabbi David Fox Sandmel, the Anti-Defamation League’s director of interreligious engagement. “The shared concerns we have about prejudice, about bias, about threats of violence, about disenfranchisement — these are the kinds of things that can bring us together.”

On Monday, the American Jewish Committee and the Islamic Society of North America launched the Muslim-Jewish Advisory Council, a group of religious and business leaders from both communities who will help draft domestic policy legislation and advocate on issues of shared concern.

The ADL is planning to increase its efforts to provide support for legal and legislative efforts in the fight against anti-Muslim bigotry.

And the Shalom Hartman Institute’s Muslim Leadership Initiative, which educates young Muslim leaders about Judaism and Israel, held a retreat over the weekend titled “Living in Trump’s America: Muslim Vulnerability and Jewish Echoes.”

“What’s happened as a result of the poisonous atmosphere that Trump has created is that American Muslims are desperate for allies,” said Yossi Klein Halevi, the Muslim Leadership Initiative’s co-director. “And the argument that MLI has made to the Muslim community — which is that the Jews are, at least in theory, natural allies for embattled Muslims — now has become compelling.”

Both Jewish and Muslim groups have expressed worry about Trump’s rhetoric, and his supporters’ actions, over the course of the presidential campaign. Muslims have protested Trump’s 2015 call for a ban on Muslim immigration to the United States, as well as his insinuations that Muslims celebrated the 9/11 attacks and have withheld information from law enforcement about terrorism. Anti-Muslim attacks rose during his campaign, and a string of attacks has followed his election.

And while Trump has not explicitly targeted Jews, Jewish groups raised alarm over his endorsements by white nationalists and online attacks on Jews by his supporters, along with his remarks late in the campaign that echoed anti-Semitic tropes. Jewish groups have protested his naming as his chief strategist Stephen Bannon, the executive chairman of a website, Breitbart News, that has been accused of incitement against Muslims and coddling anti-Semitism among its writers and readers. In addition, the ADL decried “a wave of anti-Semitic vandalism” following the election.

In the past, differing stances and sensitivities regarding Islamic extremism or Israeli military action drove groups apart. Ibrahim Hooper, spokesman for the Council on American-Islamic Relations, said he hopes Jewish groups will be more willing to work with his organization following Trump’s election. Jewish groups, including the ADL, have resisted working with CAIR due to its anti-Israel stances.

“It’s always been our position that we’re open to shared and cooperative action with the Jewish community,” Hooper said. “It doesn’t really take Donald Trump to spur that. I think it’s created an urgent need for mutual cooperation between all like-minded organizations and communities.”

The newly formed Muslim-Jewish Advisory Council, which has 31 members from both communities, formed shortly before Trump was elected last week. The council will focus on protecting the right to wear religious head coverings, prohibiting discrimination in the workplace, recording hate crimes and advocating for immigrants and refugees, according to Robert Silverman, the American Jewish Committee’s director of Muslim-Jewish relations.

“It is a reaction to some of the bigotry and hate speech that came out of the campaign,” Silverman said. “We’re concerned about the public discourse in the whole country. We’re also concerned about messages that originated within the two communities. The Trump phenomenon is only going to make it come together more quickly.”

Jewish activists who have long championed Jewish-Muslim collaboration believe their community is finally coming around.

Rabbi Marc Schneier, co-founder of the Foundation for Ethnic Understanding, which brings together leaders from the two religions, says he hopes Jews will come to the defense of Muslims if Trump follows through on his proposals to ban Muslims from entering the country, or to create a registry of American Muslims.

In June, Schneier’s foundation launched an initiative called Muslims are Speaking Out that highlights Muslim condemnations of extremism and aims to dispel misconceptions Americans have about the Muslim community.

“We have the obstacle of greater Islamophobia and anti-Muslim rhetoric,” Schneier said. “The opportunity is that this is another test for the American Jewish community. Will it step up to the plate, and will it perform as it has done in the past?”