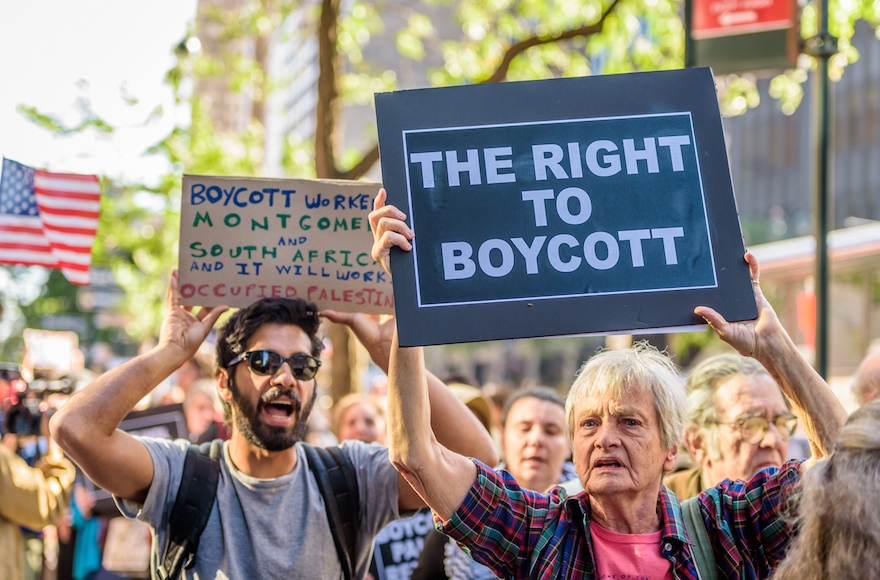 A protest outside the offices of New York Gov. Andrew Cuomo after he passed an executive order calling for New York companies to divest from organizations that support the BDS movement, June 9, 2016.(Erik McGregor/Pacific Press/LightRocket/Getty Images)
Advertisement

WASHINGTON (JTA) — Bipartisan bills targeting the Boycott, Divestment and Sanctions movement against Israel would impose fines on participating businesses but not criminal penalties, a co-sponsor of a Senate version said.

Measures introduced in recent weeks in the U.S. Senate by Sens. Rob Portman, R-Ohio, and Ben. Cardin, D-Md., and in the U.S. House of Representatives by Reps. Pete Roskam, R-Ill., and Juan Vargas, D-Calif., would extend penalties in 1970s-era bills that targeted businesses that cooperated with the Arab League boycott of Israel. Those laws included fines and criminal penalties.

The senator’s spokesman noted that the main spur for the legislation was to extend anti-boycott laws to international governmental organizations in the wake of a move earlier this year by the U.N. Human Rights Council to create a list of businesses doing business with Israeli settlements.

The bill would expand the anti-boycott legislation to protect not just Israel but its settlements. It also expands the definition of boycotts to include those that are “politically motivated.”

Even confined to penalties, the legislation would go well beyond current state and federal anti-BDS statutes, which mostly require government agencies – principally pension plans for government workers – to refuse to do business with BDS-compliant companies. Fining businesses simply for boycotting Israel could face First Amendment objections.

Cardin, speaking to reporters Wednesday, said Congress would do what it could to keep the BDS movement from “marginalizing Israel.”