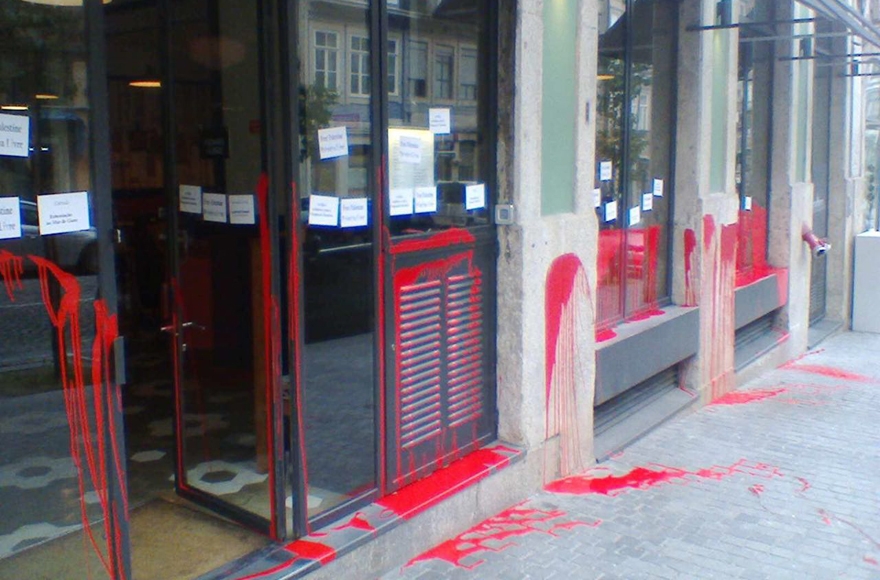 The Cantinho do Avillez restaurant in Porto, Portugal following vandalism on Nov. 19. 2016 attributed to BDS activists . (Photo courtesy of WJC)

(JTA) — Anti-Israel activists vandalized a restaurant in Portugal because its head chef participated in a food festival in Israel.

The perpetrators, who are believed to be activists for the Boycott, Divestment and Sanctions movement against Israel, on Friday night spilled red paint on the façade of the Cantinho do Avillez restaurant in the northern city of Porto and posted signs on it reading: “Free Palestine,” “Avillez collaborates with Zionist occupation” and “Entrée: A dose of white phosphorus.”

The attack, which is rare in Portugal, followed picketing opposite the restaurant by BDS activists over the participation of chef Jose Avillez along with at least 11 other chefs from renowned dining establishments around the world in the Round Tables festival in Tel Aviv this month, which is sponsored by American Express.

Robert Singer, CEO of the World Jewish Congress, condemned the BDS movement for the attack, which he said was anti-Semitic.

“The BDS movement has shown its real face. They have proved to be no more than a group of vandals. This was an act of anti-Semitism. Targeting a chef in Portugal just because he took part in a festival in Tel Aviv is despicable,” Singer said in a statement Saturday. “These self-declared human rights activists are actually quite the opposite: They spread hatred, not human rights.”

Several other chefs participating in Round Tables have been targeted by BDS activists, including Stéphane Jégo, head chef of L’Ami Jean in Paris. Following picketing outside his bistro, he hit back at his critics last month, calling them on Twitter “an affliction [hitting] people who are, at best, misinformed, mix everything up or at worst biased and dishonest.” He also noted BDS was illegal in France.

Jego, Avillez and the other visitors are taking over the kitchens of local restaurants in Tel Aviv for a week. The chefs include professionals from New York’s Musket Room and Geneva’s La Bottega.

According to The Electronic Intifada, a pro-Palestinian media outlet, the Denmark-born head of a restaurant in Bolivia has pulled out of the festival due to the pressure.