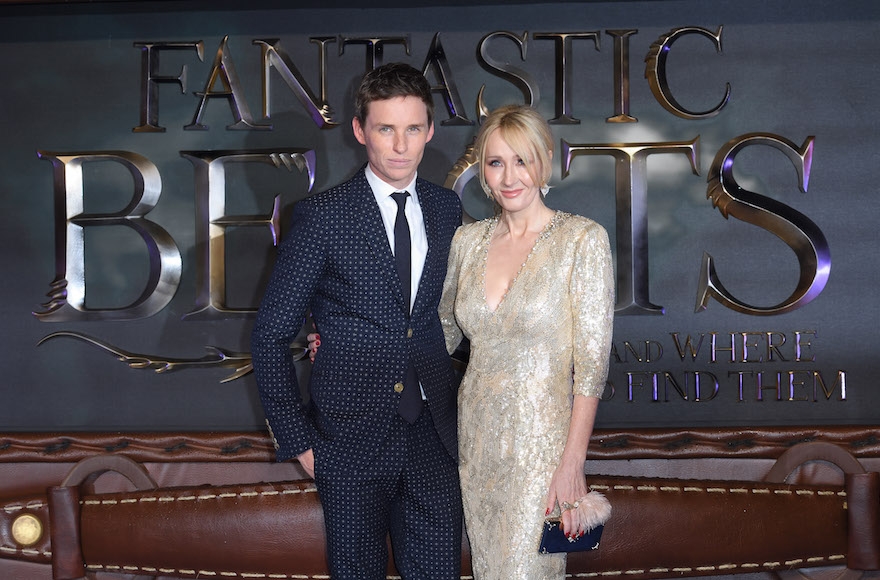 Eddie Redmayne and J. K. Rowling at the European premiere of "Fantastic Beasts And Where To Find Them" at Odeon Leicester Square in London, November 15, 2016. (Karwai Tang/WireImage)
Advertisement

The first spin-off from the Harry Potter film series, “Fantastic Beasts and Where to Find Them,” is a thrilling and at times darkly sinister adventure. The movie, which launched a new five-film franchise with new characters, has already cast a spell over Potter fans, raking in a box office best $75 million in its opening weekend.

It also happens to be an allegory of the perils of anti-Semitism, xenophobia and a general fear of the other in modern society.

Along the way, as he attempts to find some “beasts” who have escaped from his magical suitcase, Newt befriends two characters who are presumed to be Jewish: Tina Goldstein, who works for The Magical Congress of the United States, and Jacob Kowalski, a World War I veteran who wants to open a bakery on the Lower East Side (he bakes confections from recipes passed down from his presumably Jewish grandmother). J.K. Rowling always avoids identifying religions in her works, but an establishing shot of an Orchard Street sign in the heart of the Lower East Side — which was New York’s Jewish immigrant epicenter in the early decades of the 20th century — feels like a crystal clear hint.

However, the deeper Jewish undercurrent in “Fantastic Beasts” comes in a second storyline, which involves a black cloud that terrorizes the city. The viewer learns that this powerful dark mass, or “Obscurus,” which can destroy streets and buildings in its way, is actually the product of societal oppression. As Newt explains, when children born with magical powers hold in (or obscure) their identities, this dark force is unleashed. An Obscurus child usually dies before the age of 10.

An obvious parallel to be made here is to the rampant xenophobia and anti-Semitism of the 1920s. The mass immigration of Jews and southern and eastern Europeans led to a backlash in the United States, with laws passed in 1921 and 1924 severely limiting immigration. The Russian Revolution fueled fears that foreign “radicals” would sneak in with the new arrivals. Henry Ford was funding an anti-Semitic newspaper. Jewish quotas at prestigious American colleges were well underway. As a result, many American Jews hid their cultural and religious identity for fear of discrimination. “As Jews were admitted to executive suites they were expected to emulate the other occupants of those exalted quarters, that is, to become less obviously Jewish,” is how the late Jewish sociologist Daniel J. Elazar described the phenomenon. Jewish observers have debated the effects of such assimilation on the Jewish community and Jewish psyche ever since.

Rowling told The New York Times that her story was inspired by the recent rise of populism around the world. Her screenplay is set in a world of economic anxiety and distrust of the Other, where the investigation into what is behind the dark cloud is explicitly called a witch hunt, and Newt is arrested by a Magical Congress looking for a scapegoat.

It will be interesting to watch if the next four “Fantastic Beasts” movies tackle similarly political themes — and if Eddie Redmayne’s charming character makes any more Jewish friends on his adventures.