An Orthodox lesbian character — and other reasons to watch ‘Younger’ 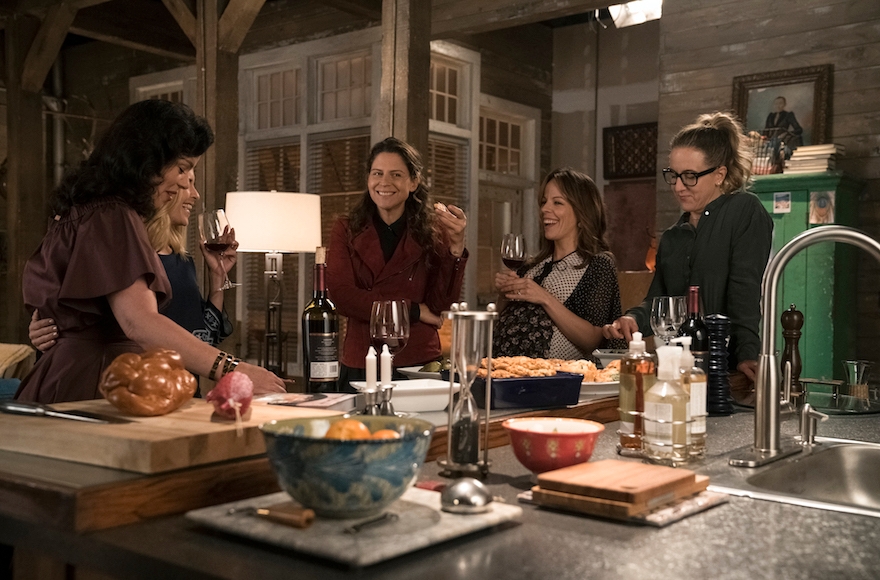 (JTA) — TV Land’s “Younger” is a fun sitcom about Liza (Sutton Foster), a recently divorced 40-year-old mother who passes herself off as 26 after having a tough time landing a job in the publishing industry.

The show — created by Darren Star, of “Sex and the City” and “Beverly Hills, 90210” fame — has already impressed us with its Jewish content.

In the first season, one of Liza’s young new friends, Lauren (Molly Bernard), decides to throw a “Hot Mitzvah” — a “redo” of the bat mitzvah when you’re older, better looking and more confident. (This is an amazing idea and we hope it catches on.)

Now in its third season, “Younger” recently upped the Jewish content with an observant Jewish lesbian, Malkie (Sally Pressman), who’s the love interest of Liza’s best friend and roommate, Maggie, who is not Jewish (though she is played by actress Debi Mazar, who has a Jewish father).

She just may be the first gay Orthodox character to have a major arc on a mainstream television show.

So far, Malkie’s been in three episodes. (Spoiler alert: She was moving too fast for Maggie but they ended on good terms, so we’re hoping she’ll show up again.) After all, Jewish gay characters are rarely shown on television, and neither are Orthodox characters of any kind — so to have a character that is both is a win for visibility in itself. 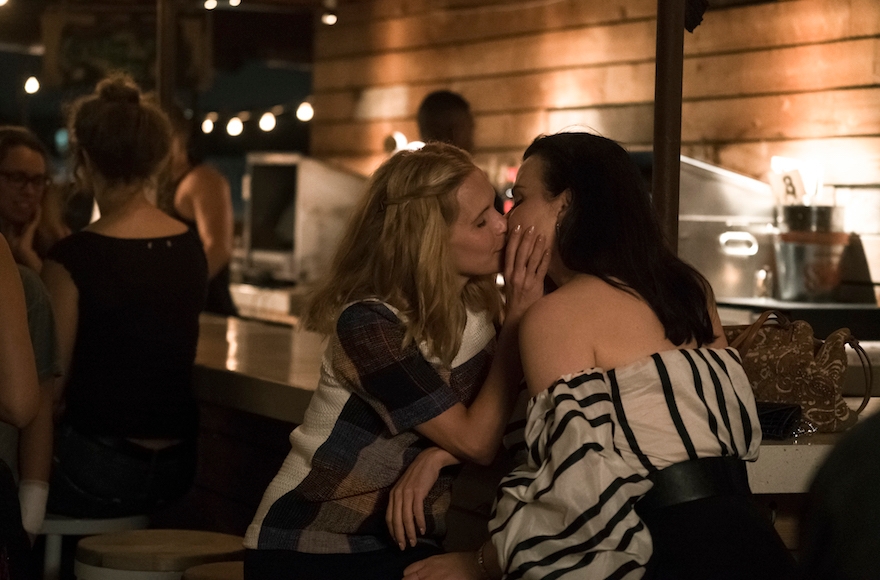 “It brings this underground group to light,” said Miryam Kabakov, executive director of Eshel — whose mission is to create community and acceptance for LGBTQ Jews and their families —  of Malkie’s appearance on the series.

Whatever happens with Malkie, “Younger” is worth watching for its strong female characters and its potential for more Jewish content. You can catch up on Amazon or at TV Land’s website or app — the holiday season is the perfect time for binge-watching such a fun show. And regardless of what happens to Malkie, her impact is felt. Here are five reasons why Malkie’s appearance on “Younger” has been groundbreaking.

1. She introduces the term “Orthodyke” to a pop-culture audience

Malkie and Maggie meet at a community garden; Malkie invites Maggie to an event at her boutique to celebrate her new spring line. When Maggie walks in and sees the mezuzah and Israeli wine, she says, “I thought you were gay, not Orthodox.”

To which Malkie replies, “Well, why can’t I be both? I’m what you might call an Orthodyke.”

Hearing that term on television was surprising, said Kabakov, who is also the editor of the anthology “Keep Your Wives Away From Them: Orthodox Women, Unorthodox Desires.” The term first originated in an informal social group that formed in Jerusalem in 1992, she said, and it later moved to New York in 1995.

“We became really popular, but we were never recognized by any community — not the Jewish community, not the Orthodox community — so for me, this is really exciting,” she said. “Now everybody has exposure to this group of people that I’ve identified with, and connected with and found community with.”

Kabakov said that the first time she heard the word Orthodyke used publicly was in comedian Judy Gold’s routine. “Some women were very happy about it,” she recalled. “It was the first time they felt they had made a bit more of the mainstream.”

Kabakov noted that you’d pretty much have to know an Orthodyke to use the word. (She adds that if they started the group today, they would not have used the word dyke, which is outdated now.) “Somebody [who works on the show] had to know somebody or have been in a circle where they heard the word,” she said.

2. Malkie shows that Orthodox woman can be stylish

There is a misconception that dressing modestly means looking frumpy — but women of all stripes can cover-up in well-fitting, attractive clothing. Malkie owns a boutique on Brooklyn’s uber-hip Bedford Ave. called Covered Girl (perfect name) and tells Maggie that she sells “stylish clothing for the modern woman, mostly Orthodox Jewish women.”

The clothes — such as flowy tops and fun hats — appeal to anyone. Maggie picks up a nice scarf when she walks in.

3. She demonstrates that religion and sexuality are not mutually exclusive

“I just think it’s so cool how you’ve managed to hold onto your faith and sexuality,” Maggie tells Malkie at one point.

In a single statement, Maggie puts a spotlight on a small community that has managed to do just that.

For Kabakov, who grew up in a modern Orthodox environment, “I decided that I was going to be fine,” she said of her personal journey. “Nobody could take my Orthodoxy from me.”

4. The episodes expose viewers to other aspects of Judaism, including the mikvah

When Malkie runs into her ex-turned-BFF, Sarah, Sarah asks her if she’s going to the “spiritual spa.” Maggie, who doesn’t realize Sarah is referring to a mikvah, gets jealous imagining Malkie naked at a spa with her ex.

This being TV, Maggie decides to follow them there and drags Liza along.

When Maggie goes in — with her numerous tattoos on full display — one woman yells, “There’s a shiksa at the mikvah! Run!”

The pandemonium that ensues is exaggerated for comedic effect — the women race to get out of the water and then drain it — but for the most part, it gives the audience more information about a ritual they might not know much about. For example, when Liza sees a sign that reads “10 Commandments of Our Modern Mikvah” — which includes rules like no acrylic nails, no cell phones and you must immerse fully — there’s actually some Jewish law on display here.

5. “Younger” gets a lot right about being Orthodox and gay

For a half-hour sitcom with limited time to devote to this subplot, it’s impressive how many details the show gets right.

For one, it’s not unusual for an Orthodox lesbian to date a woman who isn’t Jewish, Kabakov said. “It’s a personal preference, but I have met women who have no problem being with a non-Jew; for some it means not having to deal with the conflict [between the Orthodox community and being gay] for two people,” she explained.

At times, the show misses the mark. When Maggie hosts a Shabbat dinner for Malkie’s friends, she buys kosher food (at a shop called  The Kosher Butcher’s Daughter) and makes dishes like sweet potato latkes and lox crostini. Maggie’s kitchen isn’t kosher, however, so Malkie and her friends probably wouldn’t have been so nonchalant about eating off of her nice dishes —  she should have at least used paper plates and plastic utensils.

But the accuracies are far more important than the errors — and what “Younger” does is give readers a taste of this community. Malkie points out there are lots of Orthodox lesbians in Brooklyn — surprise! — and Kabakov agrees.

“Having a community is key to identity formation and retention,” she said. “When people are completely alone in their identity that is seemingly conflictual, the chances of them identifying that way are not going to be as strong as if they have a group of friends that identifies that way and is proud of it and makes it work.”

‘Jew’ isn’t a derogatory term. So why do so many people avoid saying it?