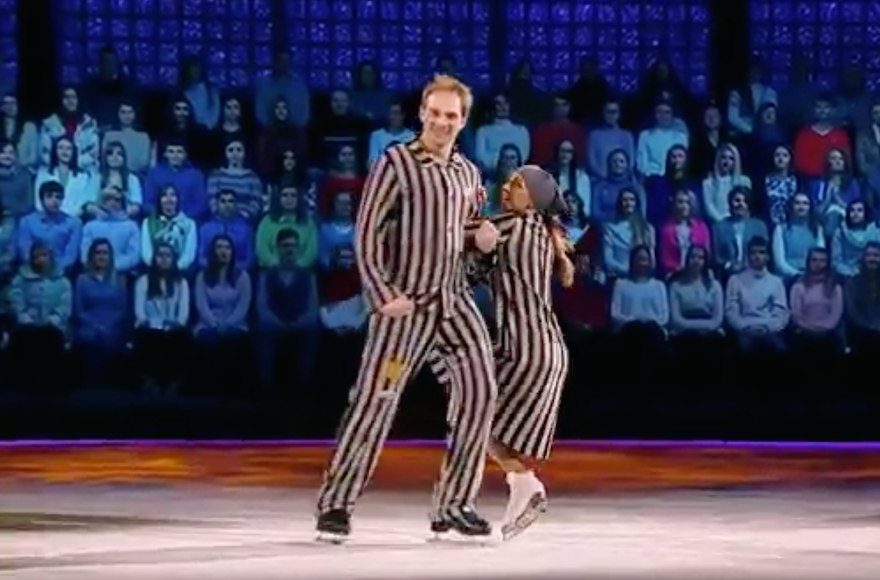 Actor Andrey Burkovsky and Tatiana Navka, a professional figure skater and wife of a senior Kremlin spokesman, wore striped pajamas with yellow Star of David patches while dancing to a song by an Israeli singer on the Russia-1 channel Saturday night. It was aired as part of “Ice Age,” a popular Russian celebrity ice dancing show similar to “Dancing With the Stars.”

Throughout the four-minute performance, Navka and Burkovsky frolic and play cheerfully with an imaginary infant. Near the end of the routine, a bright light shines on them.

Burkovsky signals to Navka that he must go and gestures for her to take care of the imaginary child before he walks into the light. A loud bang is heard and the stage goes dark but for Navka’s face as she closes her eyes and clutches the imaginary infant with her back turned to Burkovsky.

The act was loosely inspired by Roberto Benigni’s 1997 film “Life is Beautiful,” which tells the story of a Jewish Italian man who attempts to distract his son from the horrors of the Holocaust. Navka and Burkovsky danced to the song “Life is Beautiful,” performed by Israeli singer Noa, from the film’s soundtrack.

HAVE YOU LOST ALL SENSE OF DECENCY? HAVE YOU NO SHAME? The Holocaust on ice, complete with a sound track of barking dogs. https://t.co/9lMAqZHkNZ

Navka is married to Dmitry Peskov, a spokesman of Russian President Vladimir Putin.

“For a person who knows very little if anything about the Holocaust, the message is this: Put on a striped robe, adorn yourself with a yellow six-pointed Star of David, get an all-included deal at a concentration camp, and your life will be beautiful,” Yohanan Petrovsky-Shtern, a professor of Jewish studies at Northwestern University, told The New York Times. “I would call it a crime against elementary humanity.”