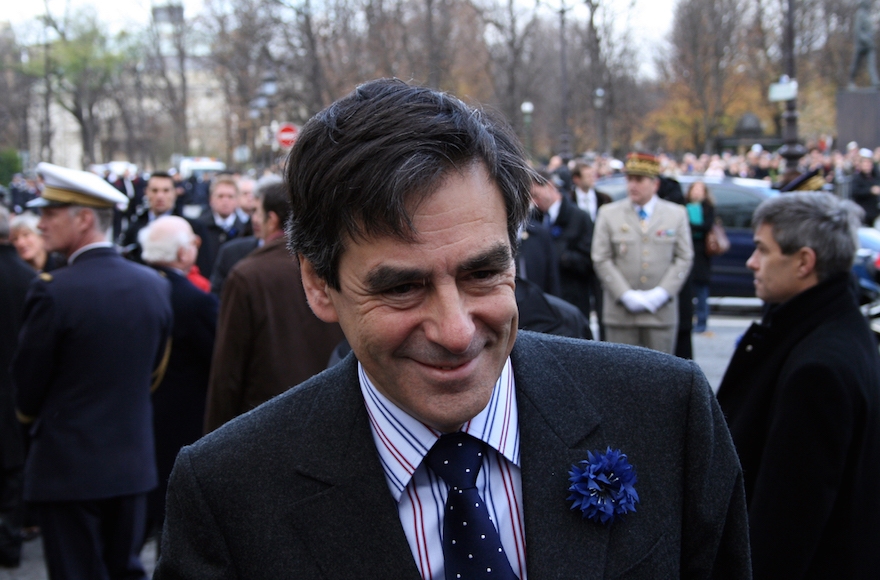 (JTA) — If the French right-wing politician Francois Fillon is elected president next year, it won’t be for his skills at promoting interfaith dialogue.

The secularist candidate widely favored to win the election in May managed to enrage many Jews, Muslims and even Catholics with a single explosive statement he made last week during a radio interview shortly after winning the Republican Party primaries in France.

Frenchmen need to fight against Muslim sectarianism, Fillon told Europe1 on Nov. 23, like “we fought against a form of Catholic sectarianism or like we fought the desire of Jews to live in a community that does not respect the laws of the French Republic.”

His remark unleashed a furious reaction by Muslim community activists like Yasser Louati, a former spokesman of the Collective Against Islamophobia in France, who called Fillon a xenophobe. And it certainly offended some members of the Jewish community, where congregants regularly recite a special prayer in their synagogues for the republic’s well-being and success.

UEJF, the left-leaning Jewish student group, criticized Fillon. But mainstream representatives of French Jewry remained unusually silent on the statement, giving observers the impression that Fillon is getting a free pass on expressing anti-Jewish bias because many Jews support his anti-Muslim stance and view him as the best hope in preventing the far-right National Front party under Marine Le Pen from reaching power.

“I was amazed by the silence of community representatives who are usually never shy in condemning any shred of anti-Jewish bias on what is clearly a very problematic statement by Fillon,” said Michel Zerbib, news director at Radio J, the French Jewish station.

Bruno Benjamin, president of the Marseilles branch of the CRIF umbrella group of French Jewish communities, called Fillon’s statement “clumsy” but “not unusual during campaigns.” He added: “I’m not about to polemicize what Fillon said.” His forgiving attitude was unusual for his organization, which is usually quick to denounce any expression of bias against Jews.

Fillon’s statement, however, did alarm some French Jews. Following his landslide victory in the primaries with 65 percent of the vote, Fillon is poised to become president. In May he will be running against a yet-undeclared candidate from the ruling party of President Francois Hollande, an uncharismatic candidate with dismal approval ratings  amid discontent over Islamism and economic stagnation.

Fillon, with his charged statements on Islam — he has said that French Muslims who engage in “Islamic totalitarianism” cannot be considered truly French – will also be running against Le Pen, who is projected to win 25 percent of the vote.

“But his firm stance is likely to be very bad news for her,” said Zerbib, joining other commentators who expect that Fillon will steal many of her would-be voters.

The remark on Jewish sectarianism  — a reference, apparently, to the Napoleonic-era bargain in which Jews accepted emancipation in exchange for declaring themselves first and foremost French citizens — is not the first time that Fillon, a hard-liner and ex-prime minister under former President Nicolas Sarkozy from 2007 to 2012, has taken aim at Jewish customs. In 2012, Jewish and Muslim groups condemned him for telling Europe1 that minorities need to abandon “ancestral traditions” and ritual slaughter “to adapt in the modern world” and science.

Fillon’s spokesman said this week that his boss was “misunderstood” and had wished to express his opposition to “all forms of religious fundamentalism,” especially by Muslims.

Benjamin said he found the clarification “satisfactory.” Zerbib disagreed, saying “I think Fillon needs to clarify what he meant by his statement and his positions on religious freedoms in general.”

Fillon’s apparent suspicion or disdain for religious customs fits into the French concept of laïcité, a strict form of secularism. In recent decades it has gained traction among French politicians and thought leaders, who regard it as a tool to check what they regard as the spread of Islam and its effects on French society. In summer, laïcité advocates, including some leaders of French Jewry, cited the concept in defending a controversial ban on wearing full-body swimsuits, or burkinis, at some beaches.

“Going with it [a burkini] is not innocent, it’s sending a message,” Moshe Sebbag, the chief rabbi of Paris’ Grand Synagogue, told JTA in August. Conceding that Jewish Orthodox women wear similar garb while bathing, he said the Muslim burkini “is not about women’s liberty to dress modestly, but a statement as to who will rule here tomorrow.”

Amid pressure, Sebbag later retracted his words. But it was nonetheless a demonstration of a willingness by a growing number of French Jews and non-Jews to accept theoretical limitations on their own freedoms in the hope of addressing the Muslim radicalization that is behind hundreds of anti-Semitic attacks annually, including several deadly assaults since 2012.

Hundreds have died in France and Belgium in jihadist attacks, including in the Bataclan concert hall in November 2015 and more recently in Nice, where 84 people were murdered in July.

This sense of threat “may also be behind the weak reaction to what Fillon said,” Zerbib said. “It may be that Jewish groups are willing to look the other way because they don’t want to be seen as partisan, or because he comes across to some as an ally.”

Reflecting the alarm of many French Jews, Benjamin, who recently called for Marseilles Jews to conceal their kippahs for security reasons, said that “Islamization is an existential threat on France.” While stopping short of endorsing Fillon, Benjamin said it “seems he is committed to offering solutions” to a “problem that will perhaps become insolvable by the 2021 election.”

Hollande and Prime Minister Manuel Valls are widely credited by French Jews for extraordinary efforts to protect them from this threat, Zerbib said, including by posting 12,000 soldiers at Jewish areas following the murder of four people last year at a Paris kosher shop.

“But Hollande is an unpopular leader also among Jews,” Zerbib noted.

Valls, however, “may command considerable support by Jews if he becomes the Socialist candidate,” Zerbib said.

Faced with this feeling of threat, a growing number of French Jews have been tempted to support the National Front, a party shunned by the Jewish establishment because of the anti-Semitism of some of its founders. The party, which once had nearly no Jewish supporters, now attracts 12 percent of the Jewish vote, polls from 2014 suggest, “and the current level of support among Jews may be higher,” Zerbib said.

Jean-Marie Le Pen, the National Front’s founder and honorary president — and Marine Le Pen’s father — was finally booted from the party this year for minimizing the Holocaust. A French court determined earlier this month that he may keep the title of honorary president.

In addition to kicking out her father and several other members who made anti-Semitic statements, Le Pen has courted French Jews by expressing support for Israel and promising Jews her party will be “their shield” against Muslim radicalism.

But last month, Le Pen reiterated her support for a ban on wearing religious garb, including by Jews, to curb what she calls the spread of Islam.

“Jews can understand that if we ask for this sacrifice from them,” she told BFMTV.

French Jews largely rejected Le Pen’s request, yet Zerbib said they appear to be more willing to give Fillon “concessions that would not have been on offer to most politicians under normal circumstances.”