Women of the Wall subjected to body searches at Western Wall 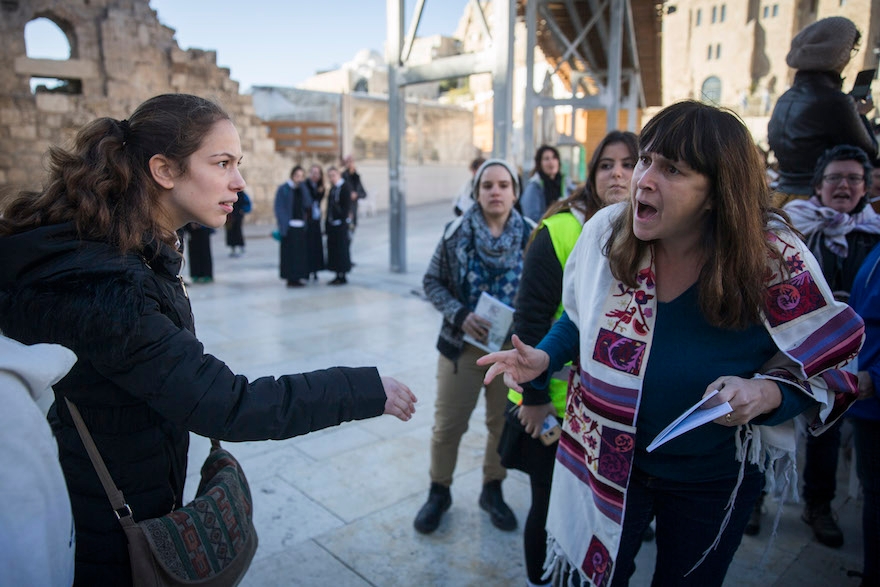 Protestors confront members of Women of the Wall at the Western Wall in Jerusalem, Dec. 1, 2016. (Hadas Parush/Flash90)
Advertisement

JERUSALEM (JTA) — Members and supporters of the Women of the Wall organization were subjected to body searches at the entrance to the Western Wall Plaza.

The women also were disturbed Thursday during their monthly prayer service marking the start of the new Jewish month by haredi Orthodox women at the site who loudly blew whistles.

During the searches, aimed at preventing the smuggling of Torah scrolls to the women’s section, some women were ordered to remove their coats and scarves and at least one woman was asked to take off her outer garments during a private search, Haaretz reported.

The increase in security was ordered by the Western Wall Heritage Foundation, run by the rabbi of the Western Wall, Shmuel Rabinovitch. The foundation determines the customs at the Western Wall, which are strictly Orthodox. Women of the Wall has been banned from bringing Torah scrolls into the women’s section since its inception 25 years ago.

“The fact that the rabbi of the Western Wall and his representatives refuse to stop the desecration of the Kotel by the whistles of the ultra-orthodox, gives them a green light for continued escalation of violence against us,” Lesley Sachs, director of the Women of the Wall, said in a statement.

Women of the Wall, as well as the non-Orthodox Jewish movements, have called for egalitarian prayer at the Western Wall.

An agreement was reached in January to establish an egalitarian prayer section at the Western Wall. The agreement was negotiated by the Reform and Conservative movements, the Women of the Wall, the Jewish Agency and the Israeli government. Under the agreement approved by the Cabinet in a 15-5 vote, the egalitarian section of the wall near Robinson’s Arch would be expanded and placed under the authority of a pluralist committee. The plan called for solidifying haredi Orthodox control over the site’s traditional Orthodox section.

Earlier this month, leaders of the Reform and Conservative movements in the United States and Israel brought at least 12 Torah scrolls into the women’s section of the Western Wall plaza for a prayer service. The scrolls were carried into the women’s section for use during the Women of the Wall’s monthly prayer service as part of a protest march against current restrictions on egalitarian worship at the site.