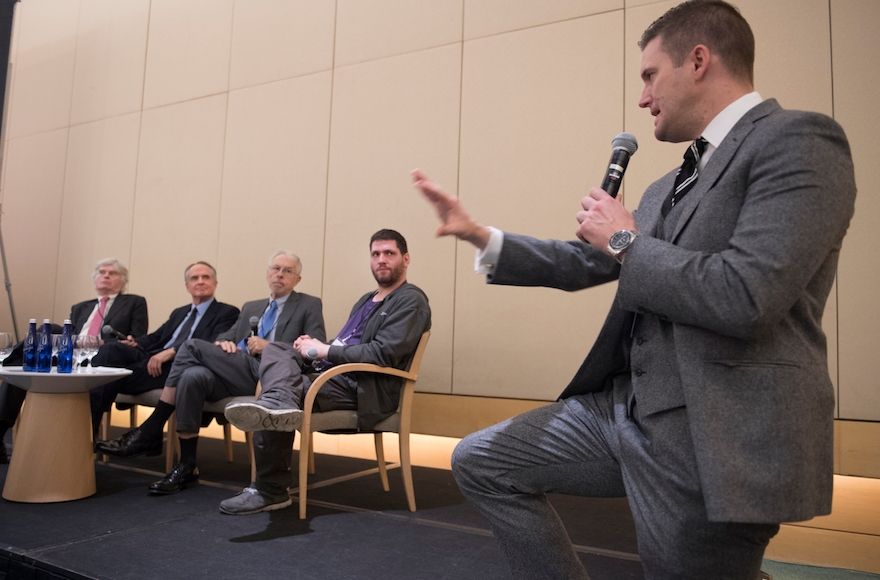 (JTA) — Richard Spencer, the founder of a white supremacist think tank, said an event in which he shouted “Heil Trump” as participants raised their arms was not threatening but fun.

“I understand why people were offended, but they have to understand the context in which it happened. The context of fun and exuberance,” Spencer told the left-leaning Israeli daily Haaretz in an interview.

Speakers at the November daylong conference of the National Policy Institute quoted Nazi propaganda and said the media protects Jewish interests. Spencer is considered the founder of the “alt-right,” a far-right movement whose followers traffic variously in white nationalism, anti-immigration sentiment, anti-Semitism and a disdain for “political correctness.”

Spencer told Haaretz in the interview published over the weekend that Jews and minorities have a place in his vision of America as a white country.

“All citizens should have the same rights and protections. American citizenship is not up for debate. I’m talking about identity,” he said.

“Donald Trump would be the first step for identity politics for white people in the United States,” he added. “His election was not about conservatism. It was not about the religious right, and it has not been about capitalism or the constitution. Donald Trump is a nationalist, and that is something brand new and it is something to be excited about, because I feel like the tide is turning in the United States.”

Spencer said it is the president-elect’s “business” who has a role in a Trump White House, including the roles of his Jewish son-in-law, Jared Kushner, and Jewish billionaire Sheldon Adelson.

He told Haaretz he hoped the U.S. government would stop providing aid to Israel. “Israel is an incredibly wealthy and successful nation-state, it has booming industries. It’s rather odd for the United States to be giving financial aid to a First World country,” he said. He also said that the U.S. should not take sides in the Israel-Palestinian conflict, though it would be “wonderful, obviously,” if the U.S. could broker a deal.

When asked about Israel declaring its capital in Jerusalem, Spencer said: “Wherever Israel wants to declare its capital, I would respect that.”

He reiterated to Haaretz that member of the alt-right “are not neo-Nazis” and that he would not collaborate on events with neo-Nazis.

“I don’t know any neo-Nazis that want to work with me, to be honest,” he said.