A white Jewish reporter, a black newspaper and a century of common causes 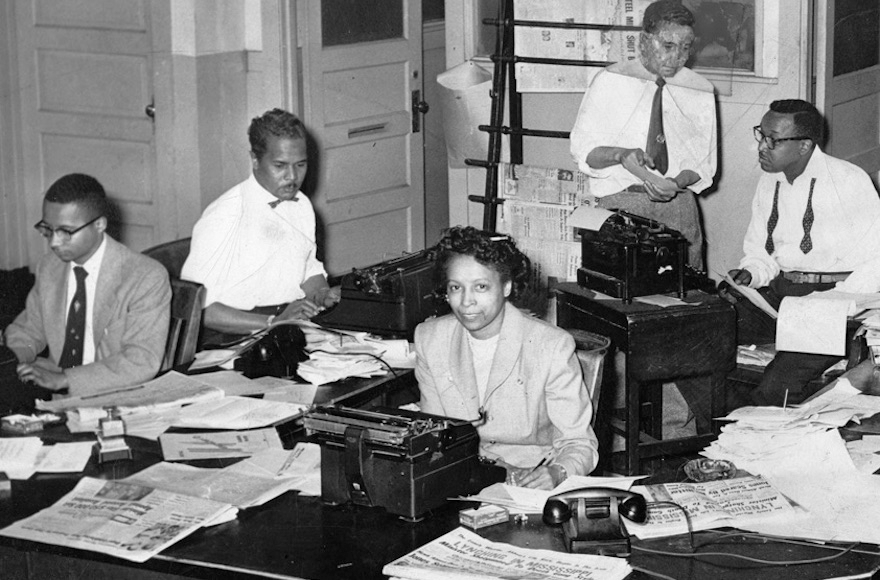 The Defender newsroom on Chicago's South Side in the late 1940s, with Audrey Weaver, the first woman city editor of any American newspaper, in the center. (Courtesy of Abbott Sengstacke Family Papers)
Advertisement

CHICAGO (JTA) — Forged at the dawn of the 20th century as both peoples arrived in northern cities, the political coalition between African-Americans and Jewish Americans has endured through defeat as well as victory.

Jews and African-Americans were Democratic nominee Hillary Clinton’s two most enthusiastic constituencies, as they have been for every Democratic candidate for decades. They have continued to vote together even as the communities have followed different trajectories and come to hold different agendas. But in the current era of upheaval, it is an open question if this alliance will survive.

I explored the origins of the relationship between African-Americans and Jews while researching the history of The Chicago Defender, a newspaper owned by African-Americans that opposed lynching and Jim Crow, fostered the Great Migration of millions from the South to the North, and focused the electoral power of black America to elect congressmen, mayors and presidents, including Harry S. Truman and John F. Kennedy.

I had been inspired to research The Defender’s history because I had worked there for 5 1/2 years in the 1990s, first as a copy editor and then as an investigative reporter. I am white and Jewish, raised in a suburb of Rochester, New York, and arrived at The Defender as a fresh graduate of the University of Chicago with a bachelor’s degree in English literature. 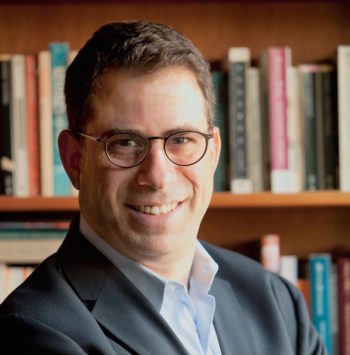 I had no particular interest in civil rights and no prior knowledge of the newspaper’s history. I had been recommended for the job by a friend, another white, Jewish, University of Chicago grad. When my friend mentioned that The Defender was an “African-American-owned newspaper,” I didn’t appreciate the significance frankly, thinking naively that we were then living in a post-racial era in which some newspapers would have white owners and others would have black owners.

The Defender in those years held its own as one of the city’s three daily newspapers, despite lacking the circulation or resources of the Tribune or the Sun-Times, and my initial months were a crash course in African-American history as well as the mechanics of journalism. After 18 months on the copy desk, I was promoted to investigative reporter, where I covered the police beat as well as the political turmoil over the city’s massive high-rise public housing developments.

Working at The Defender changed my understanding of race in America and revealed to me the pivotal role that Chicago’s African-American community in general, and The Defender in particular, had played in American history — a point that was driven home when Barack Obama, to whom the newspaper had given an early stamp of support, was propelled from his Illinois State Senate seat representing the South Side first to the U.S. Senate, and then in short order to the White House.

The Defender was founded as a weekly in 1905 by Robert Abbott, a Georgia native who had come to Chicago initially as a college student participating in the 1893 World’s Fair. There he was inspired by his meetings with the great Frederick Douglass as well as the crusading journalist Ida B. Wells. Brilliant and resourceful, Abbott adopted modern newspaper techniques – large, red headlines and separate sections for news, editorials, sports and features, among other innovations – and worked with Pullman porters and other railway workers to build a readership around the country.

Publishing in Chicago and sending his newspaper through the mail as well as over the rails, Abbott was safe to write about lynching and other atrocities in the South. But The Defender also regularly printed articles that detailed conditions for other oppressed minorities around the globe, including the Jews of Eastern Europe. In January 1910, an editorial lamented that conditions for African-Americans in the South were a “paradise compared to the way the Jews are treated in Russia,” referring to the pogroms that were taking place with increasing frequency. 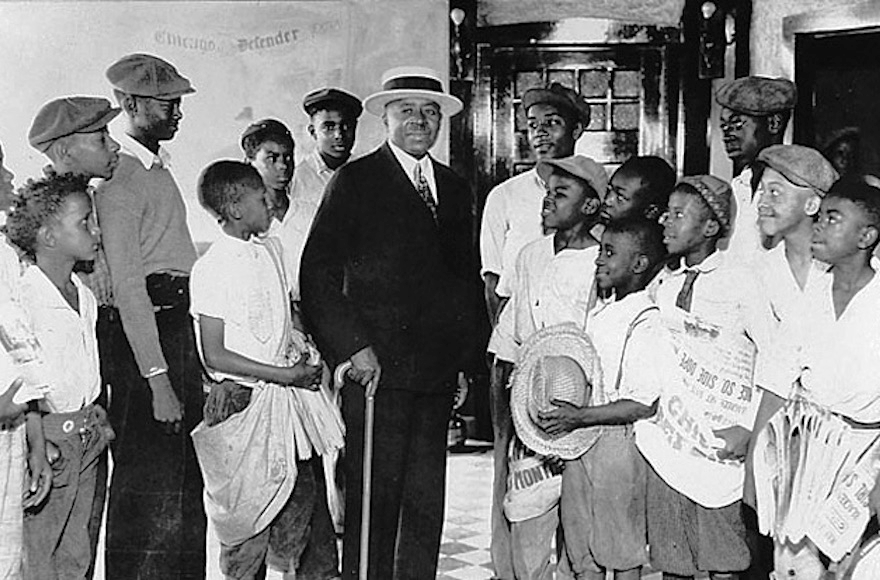 Contacts with the Jewish community were local as well. The same year, The Defender’s fine arts critic, Sylvester Russell, visited the teeming Jewish community on Chicago’s West Side, where he watched a Yiddish musical in a noisy, crowded movie theater. He came away praising the actors’ “enviable masses of black, curly hair,” as well as their musical skills and choreography, concluding that Jews had “the same warm temperament” as African-Americans.

As World War I saw millions of Jews trapped between the advances and retreats of various armies, their brethren in the United States organized both relief and political support, only to prompt suspicion and derision from many newspapers who claimed to discern a mysterious cabal behind the humanitarian campaign. The Defender, however, urged African-Americans to support the Jews and even replicate their strategies.

“The fight is a common one, a humane one, and one that should enlist the sympathies and aid of every liberty loving person,” stated an editorial in 1915 headlined “What The Jews Are Doing.”

That same year, The Defender covered the trial of 31-year-old Leo Frank on charges of raping and murdering a 13-year-old girl who worked at the pencil factory in Marietta, Georgia, where he was a manager. Despite questionable evidence, a flawed trial and a national appeal organized by prominent Jewish organizations, Frank had been convicted and sentenced to death. Georgia’s governor commuted the sentence, but in the middle of the night, a well-organized mob of men – the state’s leading citizens, by all reports – invaded the prison where Frank was being kept, snatched him from his cell, drove him to Marietta in a convoy of private cars and hanged him in a downtown park.

The Defender’s editorial page columnist, Z. Withers, expressed his condolences to Frank’s family and supporters, then observed that allegations of sexual transgressions were also used to justify similar mob lynchings of 3,453 African-American men during the previous decade. Withers maintained that these charges were manufactured precisely to arouse outrage from the white, Christian majority, and that the lynchers’ actions were calculated to terrorize rather than achieve justice.

“Will we retain lynch law at the terrible cost of endangering our own free institutions?” Withers asked. “We mention the name Leo Frank and kindly ask that you look behind this terrible tragedy for an answer.”

When the United States entered World War II in late 1941, many African-Americans were ambivalent about supporting an effort to liberate Europe from Nazi tyranny while they were still subjected to legal segregation at home, even in the U.S. Armed Forces. But African-American newspapers around the country ultimately got behind the war effort, launching a “Double V” campaign to advocate for victory abroad and victory at home.

The Defender published a special “Victory Through Unity” edition with guest essays from President Franklin Roosevelt and his wife, Eleanor, as well as a multiracial, international array of intellectuals and luminaries. Author Langston Hughes wrote an essay for the edition arguing that the Nazis and their allies represented an existential threat, and that there was no alternative to war.

“Although Alabama is bad, the Axis is worse,” Hughes wrote. “Negro editors know what democracy is about because they haven’t got much of it – and they want it. But we do have in America a freedom of speech denied, for instance, to Jews – and Negroes – in Germany.”

Remarkably, the “Victory Through Unity” edition was assembled by Ben Burns, The Defender’s first white, Jewish editor, who had come to the newspaper as an act of journalistic redemption following several years in which he had written propaganda for publications affiliated with the Communist Party. He appreciated the irony when he noticed that the building housing The Defender at that time had been built several decades earlier as a synagogue for the Anshe Dorom – “Men of the South” – congregation.

Burns was just the first in a long line of white journalists, men and women, including many Jews, who worked at the newspaper through the 1960s, ‘70s and ‘80s, even as civil rights gave way to Black Power. When I arrived in the early 1990s, Nation of Islam leader Louis Farrakhan had become one of black America’s most prominent leaders with a message of racial separatism and explicit anti-Semitism.

The Defender was careful to cover the Nation as a significant force in black America, but it made a subtle statement about where the newspaper stood on the issue of the need for an integrated society by assigning me to cover Farrakhan. For his part, Farrakhan accepted my posting and even granted me an exclusive interview, once he read my reportage and concluded that I wrote about him accurately.

My experience at The Defender removed any illusions I had that the African-American/Jewish alliance was grounded in internal similarities between the two communities, which, after all, are no longer proximate to each other, geographically or otherwise. But researching the history of the newspaper, in turn, confirmed for me that this partnership was formed in response to the threat of white supremacy at home and abroad, and that it has persisted because the menace never truly vanished from the scene.

The resurgence of white supremacists in this recent election and its aftermath – especially President-elect Donald Trump’s decision to hire as his senior adviser a man who once called his website a “platform for the ‘alt-right,’” and the horrifying spectacle of neo-Nazis rallying in Washington, D.C. – suggests that for the foreseeable future, Jews and African-Americans will continue to hold together politically. They will likely be joined by Muslims, undocumented immigrants, women’s rights activists, GLBTQ advocates, journalists and civil libertarians — out of an instinct for self-preservation, if not a shared vision for a tolerant, inclusive nation.

(Ethan Michaeli is the author of “The Defender: How the Legendary Black Newspaper Changed America” [Houghton Mifflin Harcourt, 2016], which was just listed as one of the New York Times’ 100 Notable Books of 2016.)