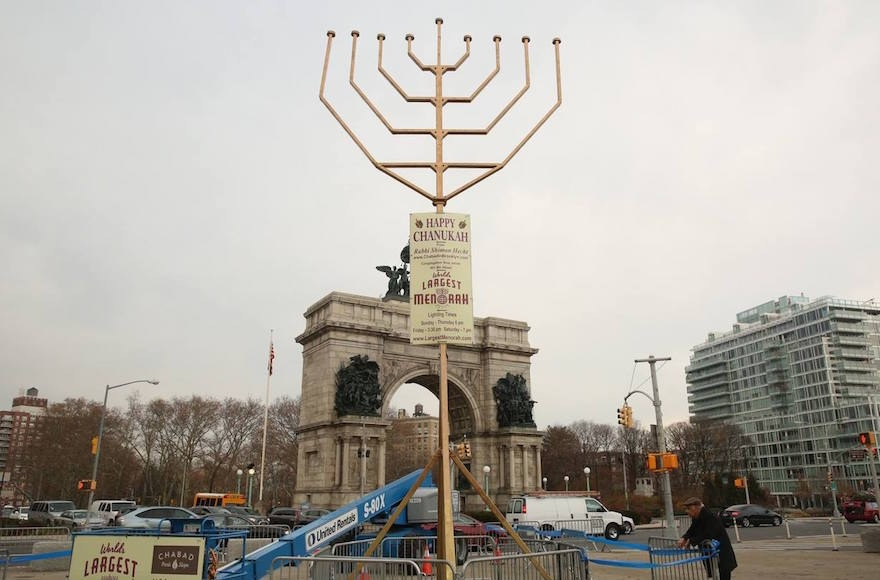 NEW YORK (JTA) — Each year in Brooklyn, Chabad Rabbi Shimon Hecht ascends 33 and a half feet to light the tallest menorah in the world.

But he’s not allowed to call it that anymore.

By decree of a Chabad-Lubavitch rabbinical court, Hecht must cede the title of “World’s Largest Menorah” to another candelabra, this one also erected by a Chabad rabbi, also in New York. That menorah is, in fact, six inches shorter than Hecht’s, but because it used the “largest” moniker first, the court said it owns the title.

“Every Hanukkah operation is meant for publicizing the miracle in a way that sanctifies God’s name and the name of Chabad, and not, God forbid, the opposite,” the judges wrote in the Dec. 1 decision. “So when another organization in the same city uses the same descriptor without permission from the plaintiff, it could cause the opposite of respect to Lubavitch.”

Each Hanukkah since 1984, Hecht’s menorah has stood at Grand Army Plaza, a public plaza at the main entrance to Prospect Park in the upscale Brooklyn neighborhood of Park Slope. Across the river in Manhattan, the other Chabad menorah, erected by Rabbi Shmuel Butman, stands on Fifth Avenue at the southeastern corner of Central Park.

The bases of both menorahs reach 32 feet, the maximum allowed by Jewish law. But Hecht’s central candle, called the shamash, pokes half a foot higher into the sky than Butman’s.

“The whole spirit of the holiday is to spread the miracle” of Hanukkah, said Rabbi Moshe Hecht, Shimon Hecht’s son. “Putting menorahs out in the public garners attention.”

Both rabbis lead institutions within the vast Chabad infrastructure. Shimon Hecht is rabbi of Chabad of Park Slope and Butman is the director of the Lubavitch Youth Organization.

In the mid-1970s, former Chabad leader Rabbi Menachem Mendel Schneerson began encouraging his emissaries to build public menorahs to increase awareness of the holiday and to inspire Jews to light their own menorahs. More than two decades after his death, Chabad rabbis put up large menorahs every year in cities around the world — one of the most visible signs of the global Hasidic Jewish outreach movement. 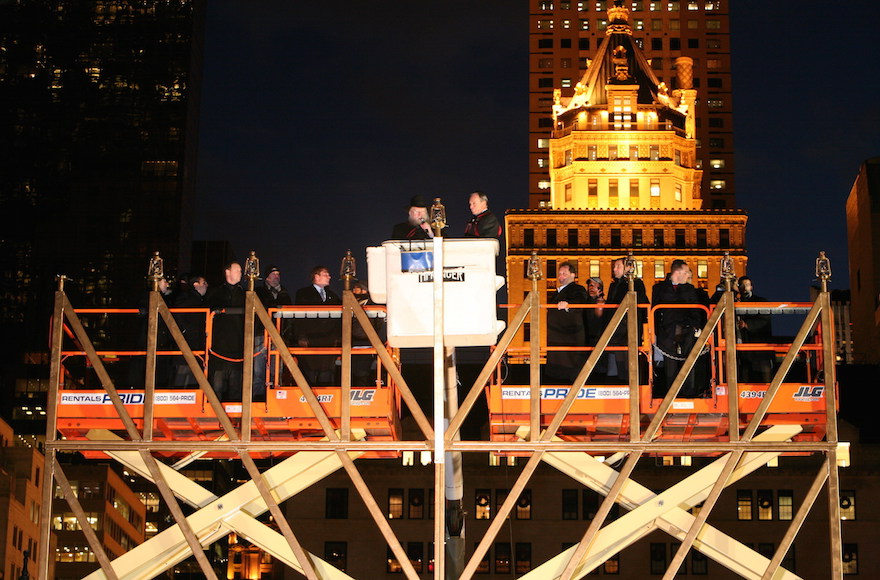 Each New York menorah has staked its claim to being the world’s largest — and each has used that distinction for all the publicity it’s worth.

The Manhattan menorah, first set up about a decade before its Brooklyn rival, stands between the posh Plaza and Pierre Hotels on Fifth Avenue. Designed by Israel artist Yaacov Agam, the menorah’s candlesticks rise from a rectangular base and shoot off diagonally. A string of New York City mayors and New York State governors have ascended in an electrician’s cherry-picker to light the Fifth Avenue menorah — though former Mayor Michael Bloomberg and current Mayor Bill de Blasio have lit candles at both locations.

In 2006, the Fifth Avenue menorah scored a coup —  it got Guinness World Records to certify it as “World’s largest menorah.”

But until the rabbinic ruling on Dec. 1, the Brooklyn menorah hadn’t let go of its claim to the title. Standing opposite a military memorial in the center of Grand Army Plaza, it rises from a single gold-colored stem that widens into an angled candelabra. Last year, Hecht drew 2,000 people to the first candle-lighting and expects a similar turnout this year.

To promote the menorah, Hecht runs the website www.largestmenorah.com and — until the court decision — advertised it on the Facebook page World’s Largest Menorah. Both the website and Facebook page feature a logo of a menorah rising from a globe.

The dispute, said Schneerson biographer Samuel Heilman, exemplifies Chabad’s dilemma since its leader’s death in 1994. Decades ago, Hecht and Butman would have appealed directly to the rebbe, whose word was final. But now, a variety of sometimes competing Chabad institutions can operate independently of one another.

“Chabad is now no longer led by a single authority, and today is really in a situation where each emissary or each territory is its own independent operator,” said Heilman, who co-wrote the biography “The Rebbe,” published in 2012.

In this case, the court became the acting authority. In the ruling, the judges ordered Hecht to change his promotional materials or surrender them to Butman, and to instead use a descriptor like “The central menorah of Brooklyn.” Moshe Hecht said he and his father are still working on a re-branding.

“We’re Jews, so we have to follow the ruling of the beis din [rabbinic court], and no further comment on that,” he told JTA. “It’s going to be the same menorah it’s been for the last 30 years.”