The 4 eras of John Glenn 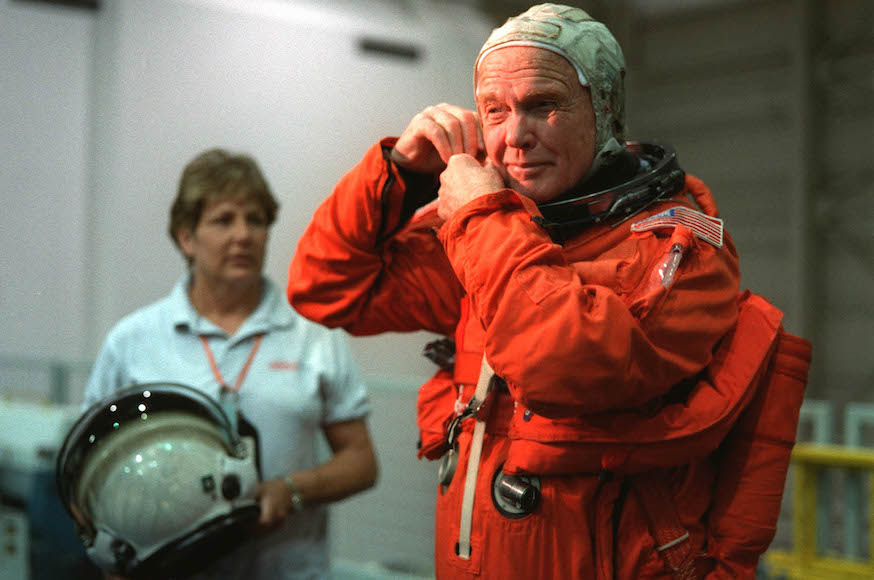 John Glenn, the pioneer astronaut and former U.S. senator from Ohio, is gone.

He was of our parents’ era. For those of us of a certain age, Glenn was the first recognizable American hero. He was the first American to orbit the earth, and his re-entry was hair-raising. He returned, modest, unassuming, the only astronaut lacking a university degree, but clearly possessed of the right stuff well before Tom Wolfe’s overwrought book ground that term into the dust. Some of my earliest memories are of my parents describing him as aspirational, someone I should look up to.

Glenn, who died Thursday at 95, was also of another era. In 1962, months after that orbit, he testified in Congress against women serving as astronauts. Imagine anyone getting away with this today:

“I think this gets back to the way our social order is organized, really. It is just a fact. The men go off and fight the wars and fly the airplanes and come back and help design and build and test them. The fact that women are not in this field is a fact of our social order,” he said.

His heroism shone brightly enough that his testimony helped keep American women out of space for another two decades.

He was also of no one’s era. His closest friend was Henri Landwirth, a Holocaust survivor, and according to New York magazine, when he first saw the tattoo on his arm – Landwirth was in the habit of covering it up, even in hot weather – Glenn said, “I’d wear that number like a medal with a spotlight on it.” One hero to another.

Glenn was also irascible, liable to go his own way, and that ultimately scuttled whatever hopes he had of a presidential run. More than a decade before Oslo, he said the Palestine Liberation Organization should be at the negotiating table. The Democratic senator worried – aloud and to Jewish friends – in the early 1980s that Israel was drifting too far right, toward expansionism. There was no way he was going to attract the pro-Israel money necessary in that era to mount a credible White House drive; he would serve 25 years in the Senate.

And he could embrace a new era he did not foresee. In 1986, well more than two decades after he said women should not travel into space, he eulogized his fellow Ohioan, the first Jewish-American woman in space, Judith Resnick, who died in the Challenger explosion:

“As we reflect on Judy’s life, and the Challenger’s last voyage, I hope we never forget the last words that came from that crew. Those words were: ‘Go with throttle up.’ Those words are fare more than a courageous epitaph. They are America’s history and they are America’s destiny. And they will turn tragedy into triumph once again,” he said.

John Glenn, go with throttle up.