How the Israeli army wages war on waistlines 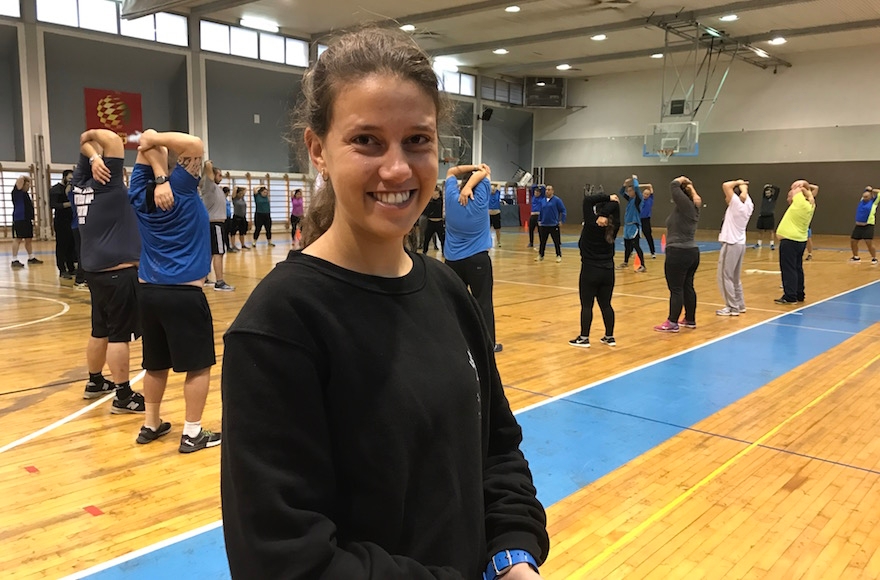 But those were just the inspirational photographs on the walls.

The actual soldiers crowded in the one-room building here on the Wingate army training base were mostly paunchy middle-aged officers. On a Tuesday morning before sunrise, several dozen of them stood around in socks and workout gear as they prepared to weigh in for a session of Changes of Shape, the Israeli army’s weight-loss program for officers.

At least once a week during the six-month program, IDF officers — most of them high ranking — come from all over the country to this coastal Israel city to check their weight, exercise and learn about a healthy lifestyle. The program offers support for the rest of the week and throughout the year as well.

Although celebrated for its Mediterranean diet and long-lived citizens, Israel is getting fatter. About half of Israeli adults are overweight or obese, the Healthy Ministry found in 2014. That compares to 71 percent of Americans over the age of 20 who are obese or overweight, according to the Centers for Disease Control and Prevention in 2015, but a rise from  32 percent from a decade earlier. 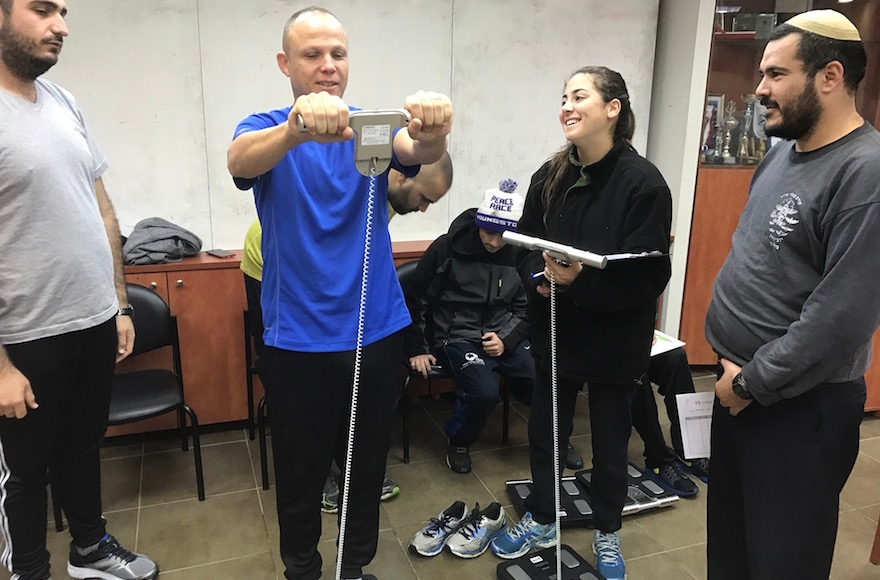 Participants in Changes of Shape weighing in on the Wingate army training base in Netanya, Israel, Dec. 13, 2016. (Andrew Tobin)

Changes of Shape is the contribution of the Israeli army, one of the country’s most powerful institutions, to the battle of the bulge. Unlike most health club “boot camps” — in which drill sergeant-like instructors push participants toward extreme diet and exercise — the Israeli army takes a very different approach to weight loss than it does to preparing its soldiers for war.

The head of Changes of Shape, Maj. Shani Fonk, 33, said the secret to the program’s success is built into the army’s culture.

“Everyone feels at home here,” she said. “They feel like we really want them to succeed, from the inside, with no connection to money or pride, because we care. We really, really care.”

Yair Karni, 65, a fitness coach in the program who was one of Israel’s greatest marathoners in his day, expressed a less sentimental view of his work. “I take fat people and make them thin,” he explained.

On Tuesday, after registering their weight and body fat percentages, the officers headed to the gym to walk and jog for an hour. Karni led the workout with help from friendly young female soldiers in black sweatshirts. Some of the officers chatted as they navigated the cones that had been set up. One took a call on his cell phone.

At the front of the pack was Dror Gonen, 43, a chief petty officer in the Israeli navy, where he has served for 25 years. He struggled with his weight his whole life, and several years ago his weight started ballooning, reaching over 300 pounds. Along with his wife, he had bariatric surgery in 2013 and lost about 100 pounds.

Then, last year, his weight began to creep upward again. 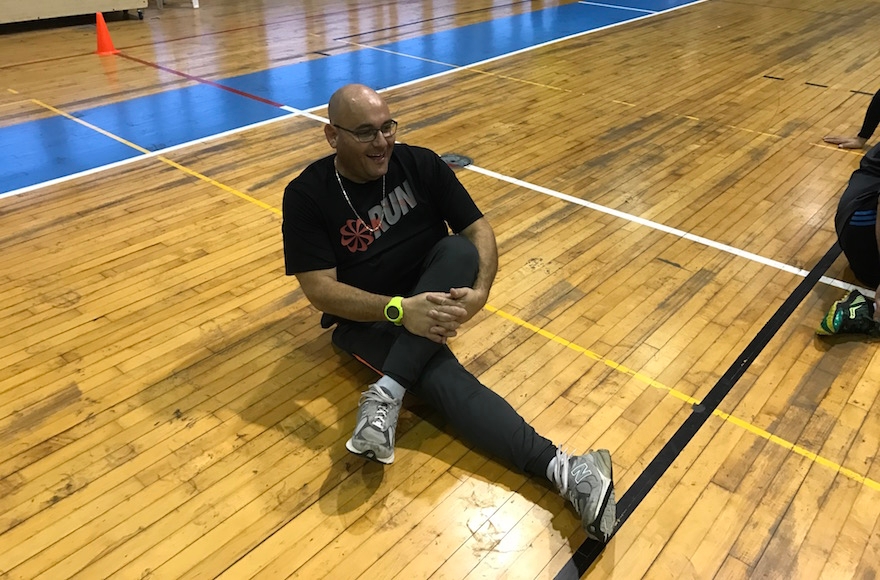 Dror Gonen stretching during a workout at the Wingate army training base in Netanya, Israel, Dec. 13, 2016. (Andrew Tobin)

Gonen joined Changes in Shape in November. He is to be discharged from the army in April, along with more than a dozen other officers, to make room for a younger generation. Gonen plans to work with at-risk youth and hopes being svelter will help him good impression at job interviews.

Like Fonk, Gonen said the key to the program’s effectiveness is the sense of community in the army. In the first seven weeks of the program he lost more than 15 pounds. But he worried he would struggle to stay on track afterward.

“It will be harder on my own, but I’m looking into local running groups,” he said.

Gonen’s concern is backed up by research. A study of season 8 contestants on “The Biggest Loser,” a hit NBC reality show, found that six years later, most of them regained much if not all the weight they lost. Four of the 14 contestants in the study were heavier than before they went on the show. The researchers pointed to a slowdown in the contestants’ metabolism as well as constant cravings and binges, perhaps due to a reduction in hunger-regulating hormones.

Israel has its own version of “The Biggest Loser” called “Going Down Big Time.” 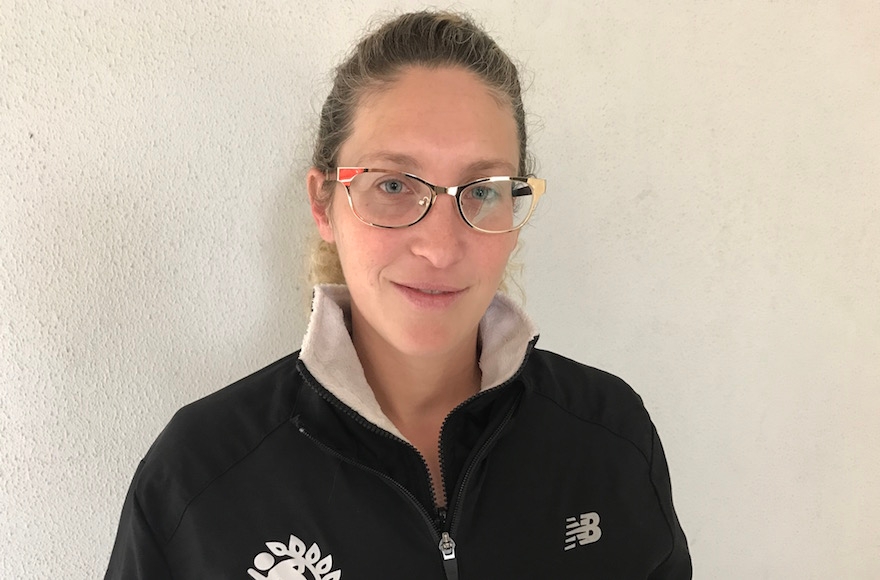 The head of Changes of Shape, Maj. Shani Fonk, 33, outside a classroom on the Wingate army training base in Netanya, Israel, Dec. 13, 2016. (Andrew Tobin)

But Fonk — who is in charge of the entire Healthy Lifestyle Department at Wingate — said that unlike ratings-driven reality shows, Changes of Shape’s communal approach helps participants shed pounds gradually by making long-term lifestyle changes.

“Studies around the world show that 50 percent of the people who do these programs relapse,” she said. “The difference is other programs don’t make a holistic change. We intervene in all aspects of the officers’ lives: nutrition, physical fitness, psychology, family support.”

She said research on the success rate of the program was not yet ready to be made public.

Karni, however, offered that 60 percent of participants succeed in the sense that five years later they have kept the weight off and remain fit. 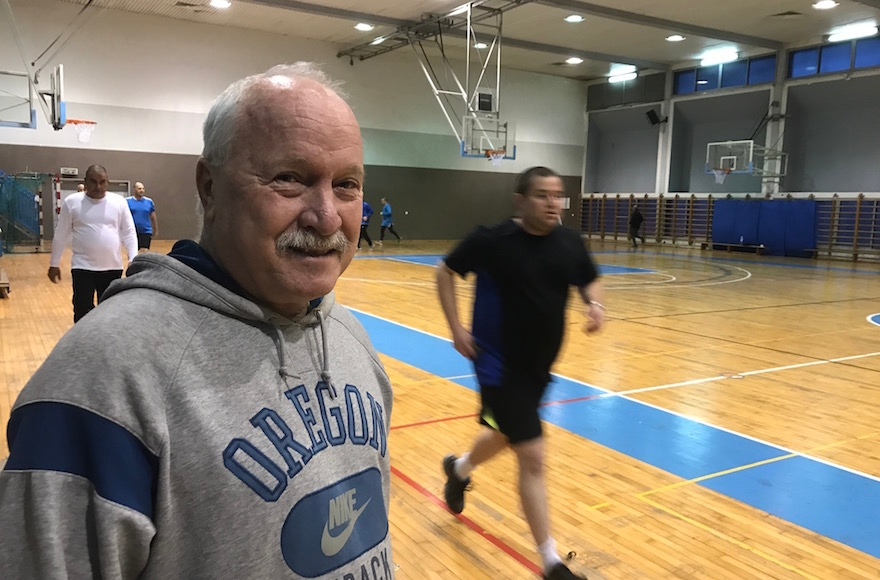 Every Tuesday, after the workout — which is followed by a light breakfast of eggs, salads and coffee — Karni teaches the healthy living class. Last week, he started by warning of a new temptation that is coming to Israel: A Burger King hamburger with sufganiyot for buns.

“It’s the worst combination: white flour and white sugar and fried,” he said, standing at the front of a classroom. “And then of course there’s the hamburger they put inside.”

He went on to explain the pitfalls of popular approaches to weight loss, including juice cleanses, diet pills and the Atkins diet. The officers, accustomed to being in charge, were not shy about interrupting, causing frequent outbursts of calorie-burning laughter.

In a more serious moment, Gonen asked, “When the road we’re on ends, and we need to start a new one, how do we continue? Do you have tools to help us know what to do after we finish the program?”

Fonk chimed in: “I know you caught the bug of wanting to continue, and that’s amazing. Take it to your units. I know people who have taken it to their units, and it’s easier if you get other people involved. You’ll be surrounded by support.”