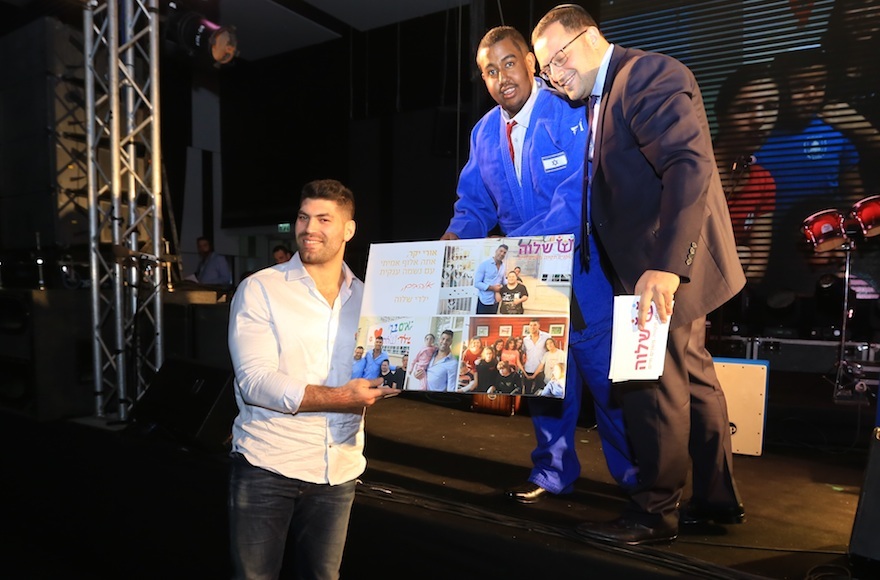 JERUSALEM (JTA) — An Olympic team jacket worn by an Israeli bronze medalist in judo was auctioned off for $100,000 at a fundraiser for children with disabilities.

Israeli judo star Ori Sasson, who won his medal at the Rio Summer Olympics, donated his team jacket to Shalva, an Israeli organization for children with disabilities.

Sasson also announced, during the organization’s annual dinner, that he will be heading a new judo program for children with disabilities at the new Shalva National Center in Jerusalem.

“A minute before I handed over the jacket, when it was still in my hands, I thought about whether I would miss having it,” Sasson said. “But then I thought about all of the good it would do and realized that it has reached its ultimate purpose.”

Sasson took third place at the Rio Olympics after defeating Alex Garcia Mendoza of Cuba in the men’s judo over-100 kg. competition. Sasson had previously defeated Egypt’s Islam El Shehaby, who refused to shake the Israeli’s outstretched hand and walked away to boos from the crowd.

“We started Shalva with many dreams to help children with disabilities in Israel. What Ori Sasson has done, enables us to fulfill the dreams of our children in ways we couldn’t even imagine when we first started the organization nearly 25 years ago,” said Avi Samuels, vice chairman of Shalva.

Yarden Gerbi, who won a bronze medal in the women’s 63-kg judo competition, auctioned off her Olympic name patch in August for over $52,000 to purchase and donate medical equipment for the Tel Aviv Sourasky Medical Center.