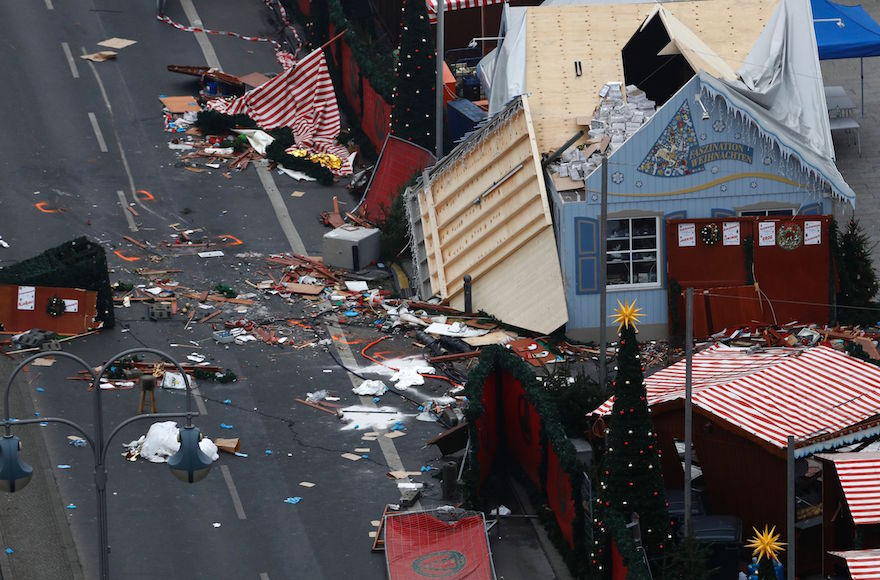 The scene of a terrorist attack in Berlin, Dec. 20, 2016. (Odd Anderson/AFP/Getty Images)
Advertisement

BERLIN (JTA) — An Israeli tourist was among the injured in Monday’s deadly terror attack in the center of Berlin and his wife was still missing.

The husband was located in a Berlin hospital, where he is undergoing emergency surgery, Elio Adler, a family friend in the German capital, told JTA. .

The couple were in the Christmas market near the Kaiser Wilhelm Memorial Church when a truck plowed into the crowd, killing 12 and seriously injuring at least 48.

Chabad has planned a Wednesday evening memorial service in Berlin.

Chabad Rabbi Yehuda Teichtal, a part of Berlin’s official Jewish community, told JTA that he had been to the scene of the attack on Monday night with colleague Rabbi Shmuel Segal to see if they could help. Teichtal told JTA that plans for the annual public menorah lighting ceremony at the landmark Brandenburg Gate would go ahead as planned, albeit with higher security.

Teichtal said he hoped that “more people than ever” would come to the event.

“We have to have zero tolerance for terrorism,” he said, “and at the same time reach our hands out.”

Expressing sorrow for the victims and their families, Berlin Jewish Community head Gideon Joffe said that Berliners are proud of their tolerant and cosmopolitan city and would fight to keep it that way.

“We can’t let terror determine our lives,” he said, adding that he urged all Berliners to attend the Chabad candle-lighting ceremony on Dec. 27, “especially in times like these.”

According to local news reports, the Polish driver of the truck was shot and killed. Police arrested one suspect after he tried to flee on foot. He reportedly came to Germany from Pakistan more than a year ago.

Early Tuesday afternoon, police announced that the arrested man was not the driver in the deadly attack and that he had been released. Police also said there is a possibility that the suspected perpetrator remains armed and running loose in the city and called on residents not to go out.

The truck was driven nearly 90 yards through the Christmas market, which was filled with holiday shoppers. Berlin police said they believe the incident was not an accident.

The Central Council of Jews in Germany in a statement called the attack “disgusting” and added: “Our thoughts and actions must not be overcome by fear and terror … May the messages of our two holidays give us strength in these difficult hours.”

“We are deeply shocked. Especially in the pre-Christmas period, when our society focuses on values like charity, goodness and peace, our country was once again hit by this disgusting attack,” said the statement, which was attributed to its president, Josef Schuster.

Israeli Prime Minister Benjamin Netanyahu in a statement issued Tuesday condemned the attack and sent condolences to the families of the people killed and the government of Germany.

“This attack joins [other] reprehensible attacks; terror is spreading everywhere and can be stopped only if we fight it, and we will defeat it, but we will defeat it much quicker if all free nations under attack unite,” Netanyahu said.