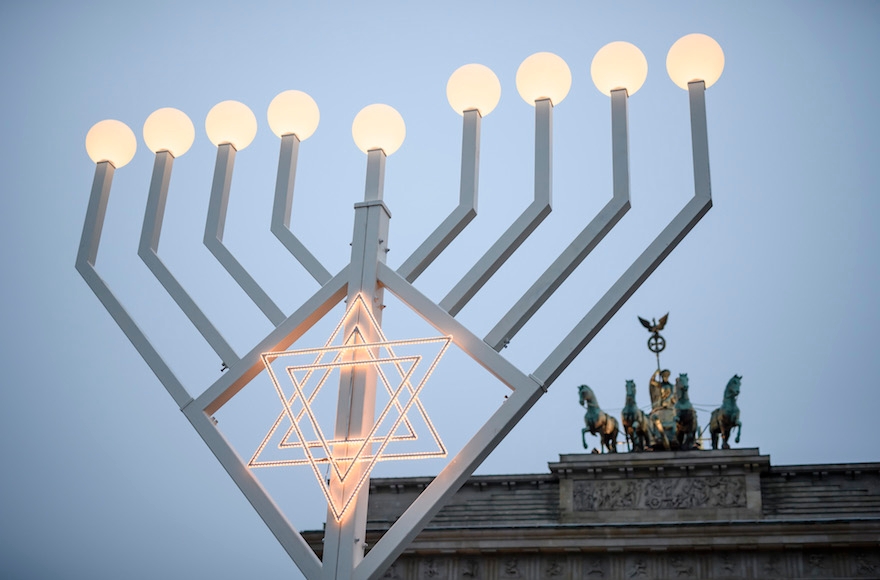 A giant candelabrum Menorah being lit in front of Brandenburg Gate to commemorate the victims, among them Israeli woman Dalia Elyakim, of the truck attack at the Christmas Market, in Berlin, Germany, Dec. 22, 2016 in Berlin. Clemens Bilan/AFP/Getty Images)
Advertisement

BERLIN (JTA) — The son of an Israeli woman killed this month in a terror attack on a Christmas market in Berlin lit the fourth Hanukkah candle on a giant menorah at the nearby Brandenburg Gate.

Or Elyakim performed the ritual Tuesday at the annual multifaith ceremony organized by Chabad at the city’s famous landmark.

Among the estimated 1,500 guests at the heavily secured event were local politicians, representatives of the Jewish community and other Jewish organizations, and Israel’s ambassador to Germany, Yakov Hadas-Handelsman.

Elyakim’s parents, Dalia and Rami, were in Germany on vacation on the day of the Dec. 19 attack, when a hijacked truck that officials said was driven by Tunisian Anis Amri plowed into the market. The Islamic State terror group has claimed responsibility.

Dalia Elyakim, 60, was one of 12 people killed. She was buried Friday in Herzliya.

Rami Elyakim is recovering from his injuries in a Berlin hospital.

Yehuda Teichtal, the head of the Chabad center in Berlin and a rabbi in the city’s Jewish community, said the ceremony should “send a message to the world that Germany is an open and tolerant country.”