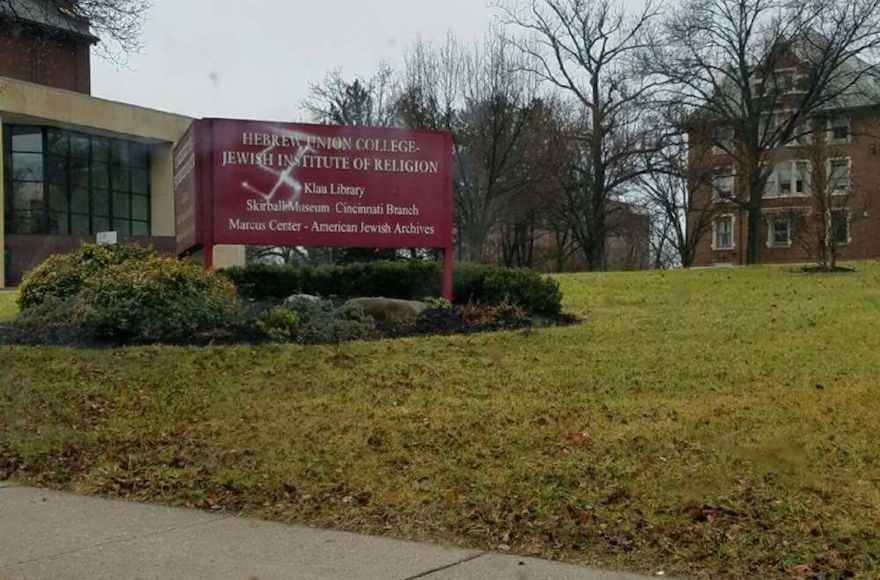 A swastika was discovered on a sign on the campus of the Hebrew Union College in Cincinnati, Jan. 3, 2017. (Courtesy of Lisa Dillon)
Advertisement

(JTA) — A swastika was spray-painted on a sign near the entrance to the Reform movement’s rabbinical school in Cincinnati.

The white swastika was discovered Tuesday morning on a Hebrew Union College-Jewish Institute of Religion sign and was reported to the police shortly thereafter, said Rabbi Kenneth Kanter, associate dean and director of the rabbinical school.

The rabbinical school removed the graffiti later in the morning at the police’s recommendation.

Kanter told JTA that the vandalism likely occurred Monday night or Tuesday morning, and that the school was looking at campus security footage.

“We are grateful for the support of the community and police, both locally and nationally, and recognize that this quickly painted swastika is a nuisance and troubling — but in comparison to issues in so many communities and cities around the world this is very small and very minor,” Kanter said.

Kanter said he was not aware of any similar acts of vandalism occurring on the Cincinnati campus in the past five or six years.

In the aftermath of the presidential election in November, the U.S. has seen a nationwide increase in anti-Semitic and other hate crimes.