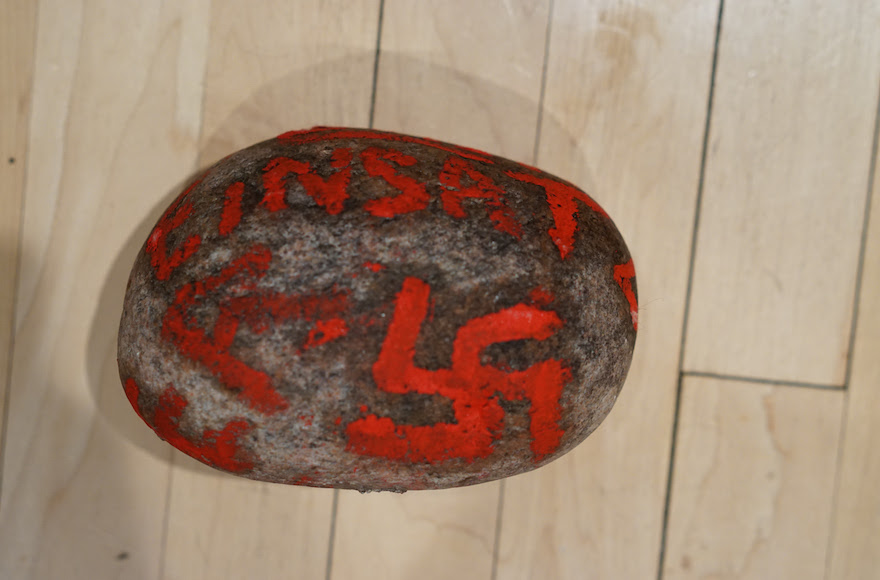 A rock with an anti-Semitic epithet and a reference to a Nazi death squad was left inside a package on the doorstep of a Jewish couple in Winnipeg, Canada. (Courtesy of B'nai Brith Canada)
Advertisement

(JTA) — A package with an anti-Semitic epithet and a reference to a Nazi death squad was left on the doorstep of a Jewish couple in Winnipeg, Canada.

The couple returned home at about 10 p.m. to find a red gift bag on their front steps containing a rock the size of a loaf of bread wrapped in a ribbon. Painted on the rock in red letters was “DIE JEW BITCH. EINSATZGRUPPEN.”

The Einsatzgruppen was a Nazi death squad responsible for the mass killings of Jews and other minorities during World War II.

A swastika was also painted on the rock. On the red ribbon were the words “Jude Bitch get out of neighberhood (sic).”

“This is very unusual for Winnipeg,” Rob Carver, the public information officer for the city’s police department, told B’nai Brith on Wednesday. “I can count on one hand in the 24 years I’ve been in this position the number of incidents that were as egregious and as threatening as this. We are very concerned about this and taking it very seriously.”

The police said they are treating the incident as a hate crime.

One of the homeowners called the incident “invasive,” as well as “horrible” and “frightening,” according to B’nai Brith Canada.