Israelis across divides rally in support of convicted soldier 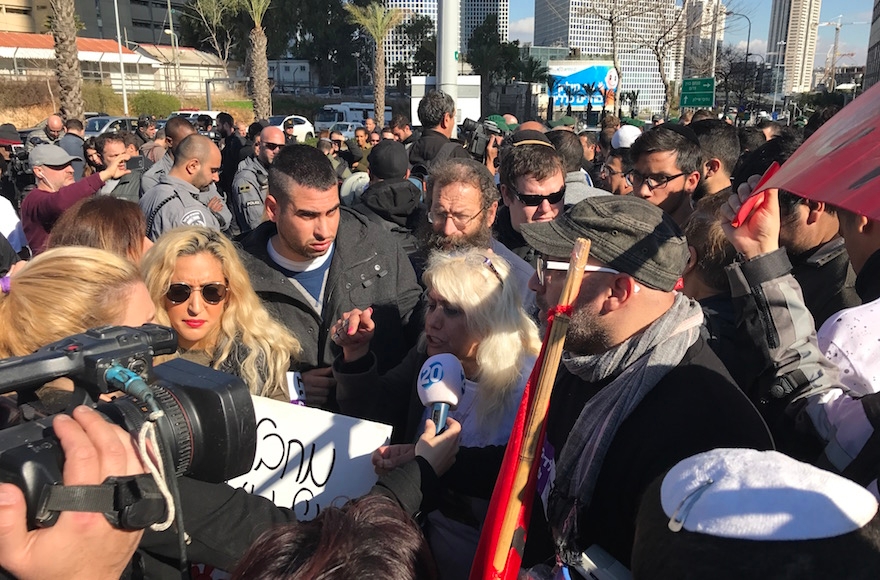 Protestors speaking to the media at a rally for Elor Azaria, an Israeli soldier convicted for killing a subdued Palestinian attacker, in Tel Aviv, Jan. 4, 2016. (Andrew Tobin)
Advertisement

TEL AVIV (JTA) – As a military court prepared to render judgment on an Israeli soldier who last year killed a subdued Palestinian attacker in the West Bank, hundreds rallied outside army headquarters here on his behalf.

Activists from far-right political movements carried flags and banners and shouted through bullhorns during the Wednesday morning rally. There were racist chants, and even threats against Israeli leaders. Some clashed with the several hundred police officers deployed to control the crowd.

But in their support for Elor Azaria, many of the protesters expressed views not far from the mainstream. Even residents of famously liberal Tel Aviv who happened to be passing by on the sunny afternoon voiced support for the rally. Palestinian terrorist attacks and failed peace talks have contributed in recent decades to a rightward shift in Israeli politics. Compulsory military service means most Jews identify with soldiers. And polls have shown widespread public support for Azaria and, beyond that, the act for which he was convicted.

In the hours after the manslaughter conviction was announced, leading politicians on the right and left called for Azaria to be pardoned. Prime Minister Benjamin Netanyahu was among them.

“Our enemies are waging a religious war to destroy us. We can’t fight them with the same rules European countries used to fight each other,” said David Kadosh, a 36-year-old protester who works as a waiter in the central Israeli city of Holon. “When terrorists attack our soldiers and civilians, they come to die. So we should make sure they do not walk away alive.”

Azaria, a medic in the elite Kfir Brigade, arrived on the scene following stabbing attacks by two Palestinians last March on soldiers in Hebron in the West Bank, a flashpoint for Palestinian violence against Jewish Israelis.

One assailant was killed and another, Abdel Fattah al-Sharif, was injured. Minutes later, while Sharif was lying on the ground, Azaria shot him in the head in a scene that was captured on video by a local resident and shared with the Israeli human rights group B’Tselem. Azaria was arrested the same day and indicted nearly a month later. Autopsy reports showed that the shots by Azaria killed Sharif.

Prior to shooting Sharif, Azaria had cared for a stabbed soldier.

During the rally, news emerged that Azaria had been convicted, causing some protesters to break into tears. For security reasons, the three-judge military panel issued its ruling from inside the walled military headquarters rather than in the courtroom where the trial was held. The judges rejected Azaria’s “twisting” defense that he had acted out of fear and ruled he had been motivated by a desire for revenge. 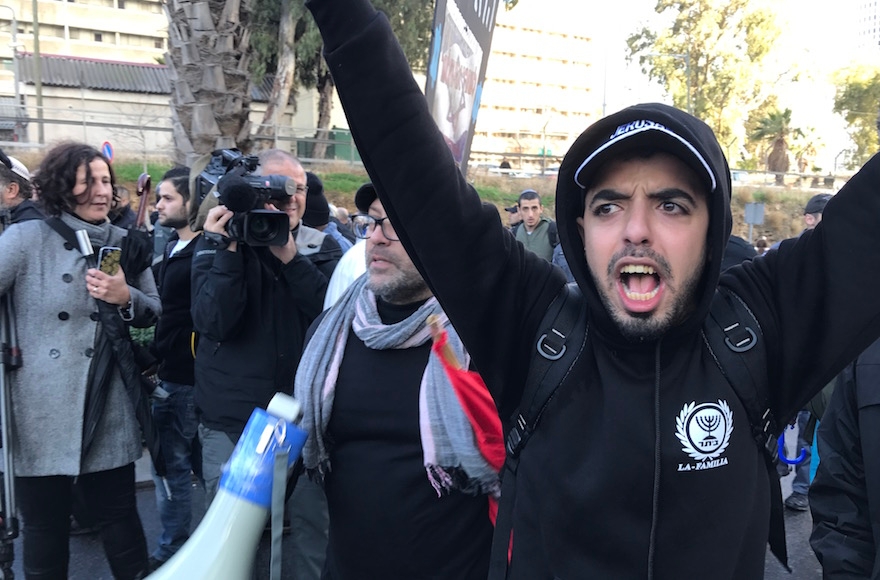 Protesters at a Tel Aviv rally for Elor Azaria being forced off the street by police, Jan. 4, 2016. (Andrew Tobin)

Yohanan Plesner, the head of the Israel Democracy Institute think tank, said the conviction showed Israeli institutions were strong. But he said the public reaction to the trial was worrisome.

“Obviously, the conclusion too many Israelis draw from their fear of terrorism is that we should no longer uphold the high standards of the Israel Defense Forces,” he said. “The concern is that the big chunk of people who understandably identify with the soldier do not embrace a deeper rebuttal of our basic values.”

In the wake of the conviction Netanyahu, who first condemned Azaria’s actions and later phoned to reassure his family, joined politicians from across the political spectrum in calling for him to be pardoned.

“I urge all citizens to act responsibly toward the IDF, the officers, and the IDF chief,” he wrote Wednesday on Facebook. “IDF soldiers are our sons and daughters, and they must remain above all conflict. I support pardoning Elor Azaria.”

Shelly Yachimovich, a prominent member of the center-left Labor Party, said Wednesday that the trial had revealed a deep division within Israeli society “and Azaria’s shoulders are not broad enough to bear the weight of that rift.”

“Therefore,” she tweeted, “at the conclusion of the trial and after the sentencing, we must carefully consider the possibility of pardoning him.” 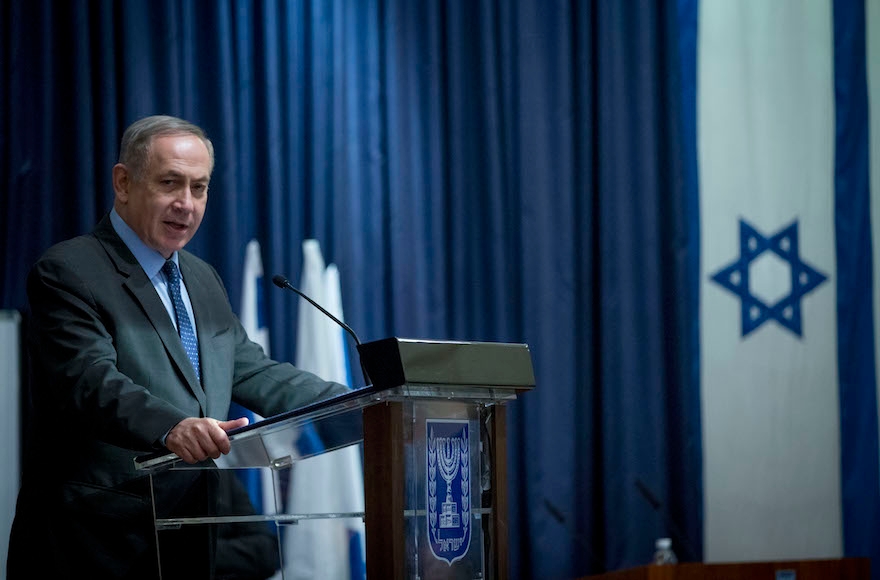 Prime Minister Benjamin Netanyahu of Israel speaking at a conference of his nation’s ambassadors at the Foreign Ministry in Jerusalem, Jan. 3, 2017. (Yonatan Sindel/Flash90)

Much of the army’s top brass, and former Defense Minister Moshe Yaalon, had denounced Azaria’s actions as a violation of military code. Members of Yachimovich’s party and left-wing Jewish and Arab lawmakers from the opposition backed the ruling and opposed a pardon.

But the broad support for Azaria by politicians tracks with public opinion surveys. An October 2015 poll by the Israel Democracy Institute, conducted well before the Azaria shooting in March, found that more than half of Israeli Jews endorsed shooting to death Palestinian terrorists who no longer posed a threat.

In August, another poll by the institute found that about two-thirds of Jews justified Azaria’s act, and nearly half favored executing a subdued Palestinian terrorist over entrusting him to authorities. Fewer preferred the reverse, and 69 percent of young people backed such executions.

Among Azaria’s supporters, a point of contention was whether it mattered if he was guilty. That division was clear among the protesters as well.

“Azaria faced the dilemma: Should I obey my officers or should I lower the risk to my friends? Our soldiers should be told to shoot to kill, and then to verify the kill,” said Eitan Luz, a religious 30-year-old from the West Bank settlement of Maale Shomron who is working on a doctorate in electrical engineering at Tel Aviv University.

“It is impossible to know, but if Azaria really acted only out of anger, he has to be punished according to the current laws. Not like this, though. He should have been charged with a lesser crime.” 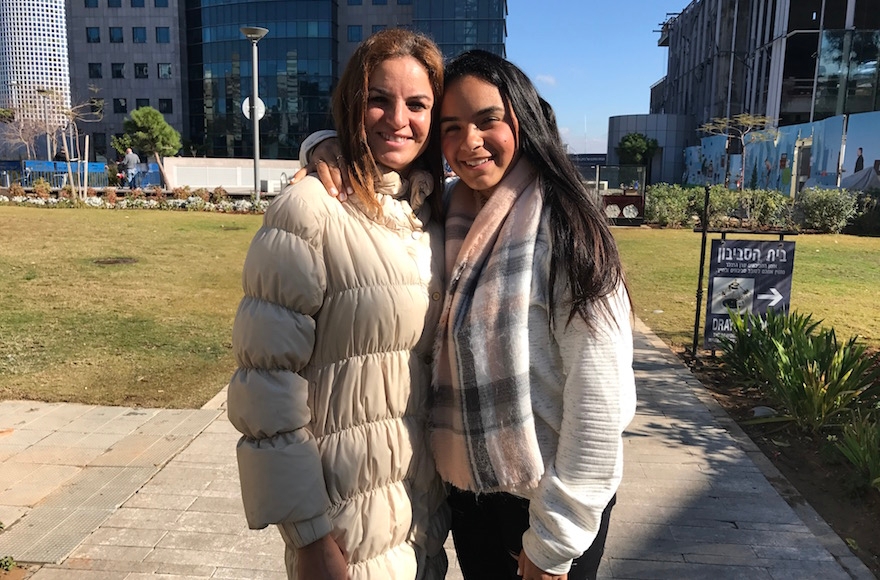 “He did the right thing,” Ailin Ainesar, right, said of Sgt. Elor Azaria. She and her mother, left, attended the Tel Aviv rally for the Israeli soldier, Jan. 4, 2016. (Andrew Tobin)

As Luz was speaking, others interrupted to disagree. Ariel Rofeh, a 30-year-old from the settlement of Alfei Menashe, said during his army service he had killed Palestinians who had yet to attack him, which he characterized as commonplace, as rights groups have alleged. Soldiers should not be punished for violating an unjust law, he said, accusing left-wingers in leadership and the media of conspiring against Azaria.

“I killed terrorists. I have Palestinian blood on my hands. I’m not ashamed,” he said, citing the influence of the late Meir Kahane, the ultranationalist and anti-democratic father of Israel’s far right, who was banned from politics for his views. “I don’t wear a kippah, but the Torah says if someone comes to kill you, you must kill him first. We must support our soldiers no matter what.”

Ailin Ainesar, a religiously traditional 20-year-old soldier who stopped by the rally with her mother, said Azaria’s conviction felt like a personal betrayal, and she predicted it would hurt morale in the army.

“If this happened two years ago, I’m not sure I would have wanted to go to the army,” she said. “I’ve always been proud of my service, but these days I’m not as proud.”

“He did the right thing,” she added of Azaria. Her mother agreed.

Plesner said it was natural that Israeli Jews, for whom military service is part of their national identity, sympathized with Azaria. That did not mean they were abandoning the moral high ground they had historically held against all odds, he said, but now was the time for the state to reassert its values.

“No other society subjected to such consistent pressure from terror would have upheld its ethics for such a long time. So I think we have a lot to be proud of,” Plesner said. “Yet this case demonstrates there is growing pressure from within to modify our army’s code of behavior, and this is a challenge we cannot dodge. We have to deal with it head-on as a country.” 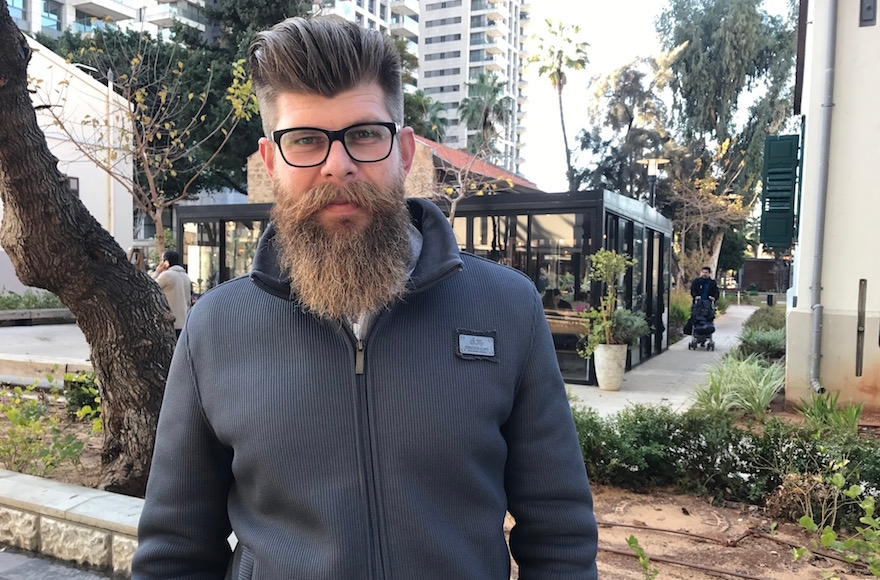 Steps away from the rally, at the chic outdoor Sarona Market, Tel Avivians chatted at cafes and restaurants. People strolled and biked along the white stone pathways past children playing on a jungle gym.

Eran Sosman, a 31-year-old tax lawyer at a nearby firm, was among several passers-by who said they sympathized with the protesters. The shooting had been blown out of proportion, Sosman said, and Azaria had been made an example for political reasons.

“He may have been negligent, but it’s not such a big thing. We forget who the bad guys are here,” he said. “The army is not falling apart. It’s just one 19-year-old kid. I guess we want to show the world how righteous we are by making an example out of him.”

Nikita Zazulinky, 32, was taking a lunch break with several of his coworkers at a high-tech company. He called the trial a “circus” and said nothing would have been done if the shooting had not been caught on video — he said that would have been better. His fellow lunchers agreed.

But Erez Lotan, a 58-year-old producer in Tel Aviv, said the country’s support for Azaria was evidence of destructive social trends.

“The morality of a nation, of an army, should be maintained. We’ve been occupying for 50 years already. I think it affects a lot of what happens in Israel,” he said.

“Azaria might be a victim of the system to some extent, but he’s a mature man. He should be held responsible for what he did. And we should be a mature country.”