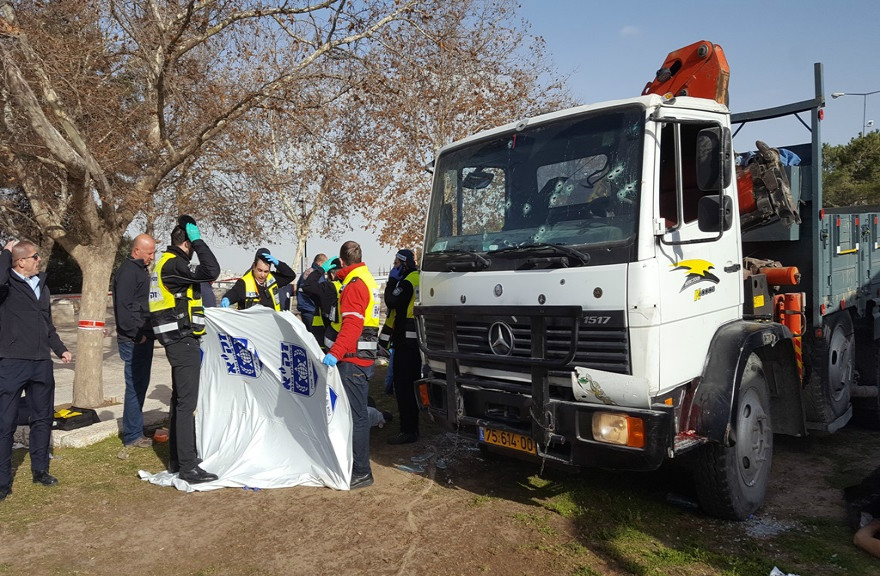 Members of ZAKA search and rescue organization gather human remains from a truck ramming attack in eastern Jerusalem that killed 4 Israeli soldiers and injured 15 others on Jan. 8, 2017. (ZAKA photo by Yehezkiel Itkin)
Advertisement

JERUSALEM (JTA) — A truck crashed into a group of soldiers in eastern Jerusalem, killing four and injuring at least 15, in what is suspected to be a terrorist attack.

The soldiers, cadets in an officers’ training course, had just gotten off of a bus on early Sunday afternoon on the promenade in the Armon Hanatziv neighborhood of eastern Jerusalem, also known as East Talpiot. The promenade marks the border between the eastern and western halves of the city, and is usually full of joggers, walkers and tourists.

Four of the soldiers, aged 20 to 22, were pronounced dead at the scene, according to the Magen David Adom rescue service. At least one of the injured is in serious condition. The injured soldiers were evacuated to the Hadassah Medical Center in Jerusalem’s Ein Karem and to the Shaare Zedek Medical Center in Jerusalem. Three of the dead soldiers are reported to be women.

The driver of the truck was shot and killed by shots fired during the attack, when the truck veered from where it was driving and headed for the soldiers, according to reports. Witnesses told Israel Radio that after the truck hit the group it accelerated in reverse, trapping soldiers under the large truck.

Reports said the truck had come from the eastern Jerusalem Arab neighborhood of Jabel Mukaber and had yellow Israeli license plates. The driver was later identified as Fadi al-Qanbar, 28, of Jabel Mukaber. Hamas said he had served time in an Israeli prison.

Hamas praised the attack in a statement posted on the Facebook page of its spokesman.

“The continuous operations in the West Bank and Jerusalem prove that the Jerusalem intifada is not an isolated event, but rather a decision by the Palestinian people to revolt until it attains its freedom and liberation from the Israeli occupation,” the post said.

Police units at the scene of truck ramming attack in Jerusalem. A number of people critically wounded. Police looking into the Terrorists id pic.twitter.com/HFLhF8m9iN

The Zaka search-and-rescue organization also arrived at the scene to help treat the injured alongside other emergency services and to remove the remains and blood at the scene for burial with the body.

“This is a very difficult attack. I arrived with other Zaka volunteers and the scene looked like a battlefield. Many injured lay on the grass, some of them were still trapped under the terrorist’s truck,” Zaka Jerusalem commander Bentzi Oering said in a statement.

A video of the attack was later posted on YouTube.