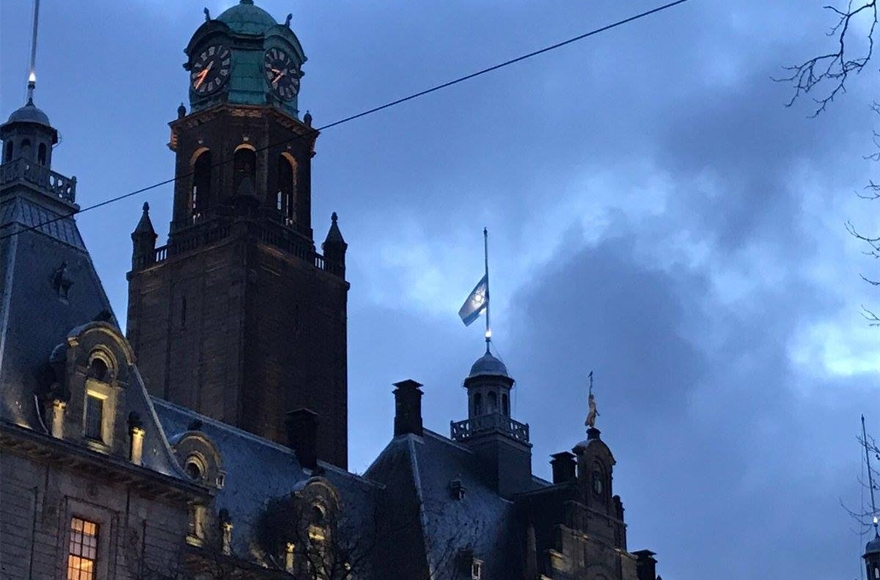 The Israeli flag flying at half-mast atop City Hall in Rotterdam, the Netherlands, on Jan. 10, 2017. (Photo courtesy of NIW/David de Leeuw)

AMSTERDAM (JTA) — The seat of the municipality of Rotterdam, the Netherlands’ second-largest city, flew an Israeli flag at half-mast in solidarity with the Jewish state following a terrorist attack in Jerusalem.

Rotterdam City Hall flew the Israeli flag Tuesday at the suggestion of Bart Schut, a journalist for the Nieuw Israelitisch Weekblad, the country’s main Jewish weekly, following the slaying of four soldiers on Sunday by a Palestinian terrorist who plowed a truck through a crowd of soldiers who had just alighted from a bus in the eastern Jerusalem neighborhood of Arnon Hanatziv.

Rotterdam’s mayor, Ahmed Aboutaleb of the Labour Party, is a Morocco-born Muslim. But the gesture involving the Israeli flag was taken by Joost Eerdmans, the acting mayor and leader of the right-leaning and pro-Israel Livable Rotterdam party.

Founded in 2001, Livable Rotterdam is affiliated with the movement started by the late politician Pim Fortuyn, who was murdered in 2002 by a far-left activist.