For these pro baseball players, visiting Israel is like coming home 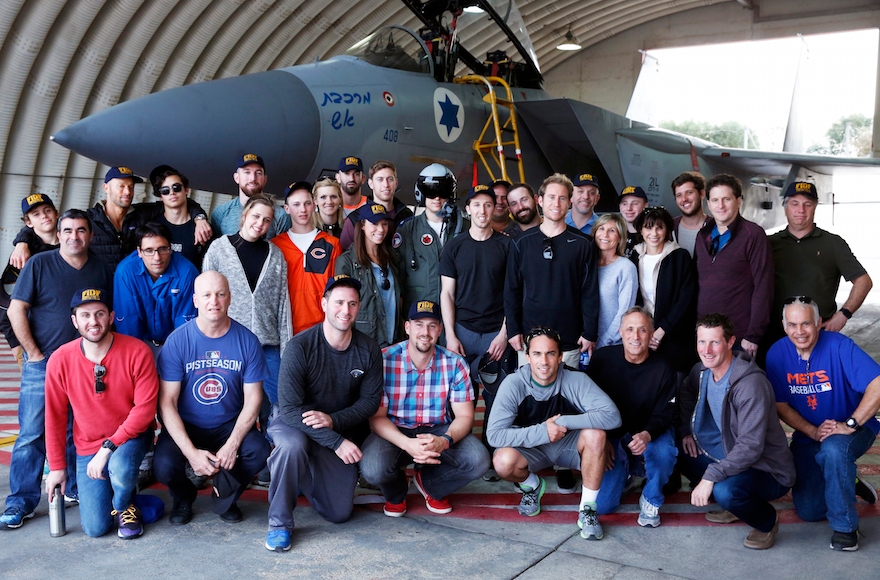 Baker and Bleich, pitchers in the minor leagues and members of the club representing Israel in the World Baseball Classic, are the only ones who have previously visited Israel as adults, both on Birthright trips.

The 10-player delegation arrived here last week from Las Vegas and Chicago aboard a corporate sponsor’s private plane for a six-day visit that concluded Monday and was meant to connect the nearly all-American Jewish team with the country they are representing in the tournament, a quadrennial event modeled after soccer’s World Cup. Israel will resume play March 6 in South Korea, having won a preliminary round in Brooklyn, New York, in September.

“For me, it feels good to tell them things because I’ve been here before,” said Baker, who played in 2016 for the St. Louis Cardinals’ AA and AAA teams and won a WBC game in Brooklyn. “Everyone’s excited to get some falafel and shawarma to see if it lives up to the hype.”

The players and their significant others were kept busy with a steady dose of modern Zionism, vibrant Israel, fun and some baseball. A venture capitalist told them about Israel’s cutting-edge high-tech scene. They met Knesset member and New Jersey native Michael Oren. They joined a graffiti artist in painting a mural of Hall of Famer Sandy Koufax on a Tel Aviv shopkeeper’s door, rode bikes on the city’s Mediterranean promenade and met fighter pilots at an Air Force base.

On Friday morning, they dedicated a new baseball field in Beit Shemesh and visited the Yad Vashem memorial to the Holocaust. Over the weekend, the players took in Jerusalem’s Old City, Masada and the Dead Sea.

“There’s nothing more exciting to me than to bring people who’ve never been here before,” said Jeff Aeder, a Chicago businessman and founder of the Jewish Baseball Museum who is funding the trip and brought his son.

“You made me the happiest kid in the world,” he told Lavarnway.

The players seemed as impressed by the surroundings as the spectators were of them. A goal of the trip is to connect the crew with the country they are representing in the WBC. But for most that was off their radar, said Peter Kurz, president of the Israel Association of Baseball.

“Tel Aviv is amazing,” said Davis, a former member of the New York Mets and other teams. “It’s kind of like cities we’ve been to, but in Hebrew.”

Baker said: “Whether you’re religious or not, you grew up with Bible stories, but that’s what they are – stories. In Israel, we see it.”

Along with Moscot, whose arm injury will prevent him from pitching in Seoul, the delegation included Mets infielder Ty Kelly and outfielder Sam Fuld, who played last season for the Oakland Athletics and is a free agent. Another major leaguer who will join the club in Seoul is Danny Valencia, an infielder for the Seattle Mariners. (By WBC rules, a player may compete for a country if he is eligible for citizenship under its laws. Israel extends the right of automatic citizenship to Jews, their non-Jewish children, grandchildren and the non-Jewish spouses of their children and grandchildren.)

Kurz said he hopes that players’ on-the-ground tweets and phone calls will aid in recruiting to the squad several major league stars who are Jewish: infielder Alex Bregman of the Houston Astros and outfielders Kevin Pillar of the Toronto Blue Jays, Joc Pederson of the Los Angeles Dodgers and Ryan Braun of the Milwaukee Brewers. None in that quartet has ruled out participating, he added.

Kurz also expects the WBC visibility to boost Israelis’ interest in the sport. Following Israel’s inaugural tournament appearance in 2012, enrollment in IAB leagues jumped 25 percent, Kurz said – a figure he thinks he will match this time.

His WBC players expressed pride at being included on the team and this visit.

“As soon as they asked, I was excited,” Lavarnway said.

“It was the easiest decision I could make,” added third baseman Cody Decker, who reached the majors with the San Diego Padres.

And from Kelly: “I feel very appreciative and honored to be part of this team.”

Moscot visited as an 8-year-old and is the Jewish-American player on the team with the strongest connection to Israel. He has an uncle and many cousins living in the country, and his father, Elliott, an eye doctor, resided here for four years. The pitcher’s grandparents, Joseph and Rose Moscot, lived here, too, and are buried in Beit Shemesh.

“The guys see that as a Jewish American, I have ties here, and they see that it’s not a random country in the Middle East,” Moscot said. “It’s important for us to be playing for a country we have a relationship to – that there’s a bond there. After this trip, hopefully the guys will realize that it’s a special thing, that there’s some deeper meaning in it.”

“I personally feel a part of this, of Israel – the Jewish state of Israel,” Lavarnway said. “I feel a big part of this.”

As night fell, Davis talked to the fans gathered behind the backstop about his feelings.

“The cool thing about Israel is that Jewish people have a home here no matter where we live,” he said. “We might stay here if you want us to. When you get here, it feels a little like home.”