Trump in response to leak of Russian dossier: ‘Are we living in Nazi Germany?’ 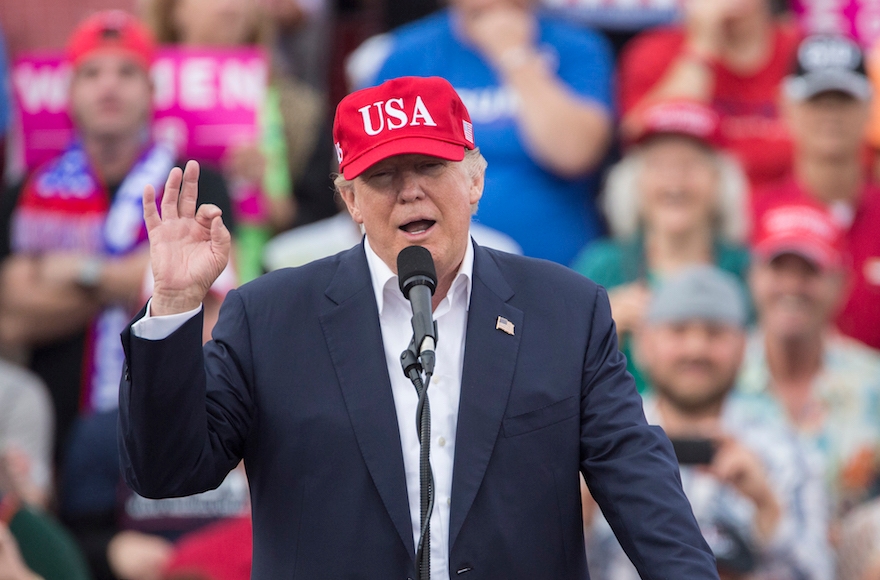 (JTA) — President-elect Donald Trump asked “Are we living in Nazi Germany?” in a tweet blaming intelligence agencies for reports that Russia has a dossier with compromising personal and financial information about him.

“Intelligence agencies should never have allowed this fake news to ‘leak’ to the public. One last shot at me. Are we living in Nazi Germany?” he tweeted Wednesday morning.

Intelligence agencies should never have allowed this fake news to "leak" into the public. One last shot at me.Are we living in Nazi Germany?

The tweet came on the heels of several others in which he called the existence of such a file a “total fabrication” and “utter nonsense.” He also tweeted that he has “nothing to do with Russia,” including “no deals” and “no loans.”

He called reports of the file “FAKE NEWS – A TOTAL POLITICAL WITCH HUNT!”

Russian officials have denied the report.

“The Kremlin has no compromising dossier on Mr. Trump, such information is not consistent with reality and is nothing but an absolute fantasy,” Kremlin spokesman Dmitri Peskov said at a regular news briefing, The New York Times reported.

A two-page summary of the dossier was attached to a U.S. intelligence report on Russian interference in the 2016 election. The summary was first reported by CNN.

Memos in the dossier reportedly describe sex videos of Trump and prostitutes at a Moscow hotel in 2013, allegedly recorded for use as leverage against the new U.S. president, according to the Times. The dossier was compiled from information received from Russian informants and others for a Washington political research firm by Trump political rivals, the newspaper reported.

Various news outlets have emphasized that the claims contained in the dossier have not been substantiated.

Steven Goldstein, executive director of the Anne Frank Center for Mutual Respect, criticized Trump’s reference to Nazi Germany and called for him to retract the tweet.

“It is a despicable insult to Holocaust survivors around the world, and to the nation he is about to lead, that Donald Trump compares America to Nazi Germany,” Goldstein said in a statement. “The President-elect has denigrated our nation and its commitment to freedom on the eve of his inauguration. He must retract his tweet and apologize to survivors and to our entire nation.”

Trump was scheduled to hold his first news conference since before the election on Wednesday.