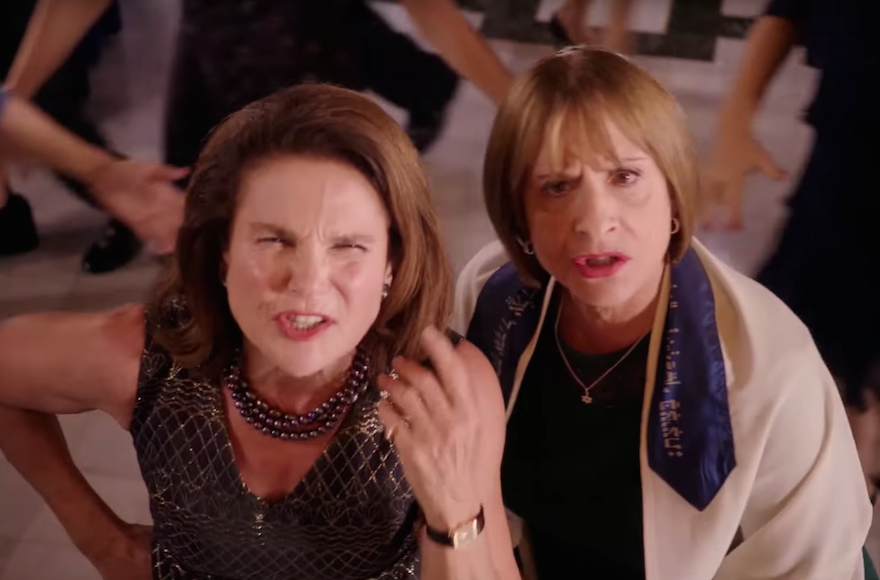 (JTA) — Season one of “Crazy Ex-Girlfriend” hooked us with its Jewish content and relatable storylines.

In the episode, appropriately titled “Will Scarsdale Like Josh’s Shayna Punim?,” Rebecca brings Josh home to New York to attend a family bar mitzvah. The episode delivers the tunes, the humor and the truth we’ve come to expect from the series. Rebecca finally makes some important revelations about herself, but that might be derailed after a bombshell ending.

In addition to all that, there were many standout Jewish moments. Here are the five most memorable:

You thought “JAP Battle” was great? The show may have just topped itself with the song “Remember that We Suffered.”

Broadway legend Patti LuPone guests as Rabbi Shari and sings “in a minor key to remember that we suffered.” That would have been enough —dayenu! — but then Tovah Feldshuh, in a recurring guest role as Rebecca’s mother Naomi, joins in, too. If there’s not an online petition yet to replace “Hava Nagila” with this song during the hora at all future bar mitzvahs, there should be.

Some Jews can be racist, too.

Yes, Jews have been oppressed — but that hasn’t stopped some from making xenophobic comments. Before heading to New York, Josh worries that he’ll get called “an Oriental.” His friend, Father Brah (Rene Gube) delivers this harsh truth: “I’m a man of God, and I try to believe the best about everyone, but if you think you’re going to make it through a whole weekend with a bunch of 70-year-olds and not get called an Oriental, you’re out of your ever-loving mind.” Sure enough, Rebecca’s mom uses the word —  but they bond later and she learns to call him a Pacific Islander.

One minute Rebecca and her mom are fighting; the next they’re laughing about Skyler’s Torah portion, which involved menstruation and lepers — much to Josh’s bewilderment. Also, after Naomi jokes about going to the bathroom, Josh says: “In my family we don’t talk about poop.” Isn’t that basically all Jewish families talk about?

Frenemy Audra Levine is back.

The rap battle between Rachel and her frenemy Audra Levine (Rachel Grate) is one of our all-time favorite moments on the show, so it was nice to see Audra back again. This time she is joined by her husband, David. While the interaction between the two women is appropriately frosty, their two “other halves” seem to hit it off.

The bar mitzvah party is realistic.

Bar mitzvahs on television shows vary in their degrees of authenticity, but from the blue-and-white balloons to the inflatable guitars, this looked like an actual bar mitzvah party. There was even a photo booth, complete with old-timey hats and mustache sticks — and, in a very 2017-tween fashion, the kids can simultaneously Tweet, Facebook, Instagram and Snapchat their photos.