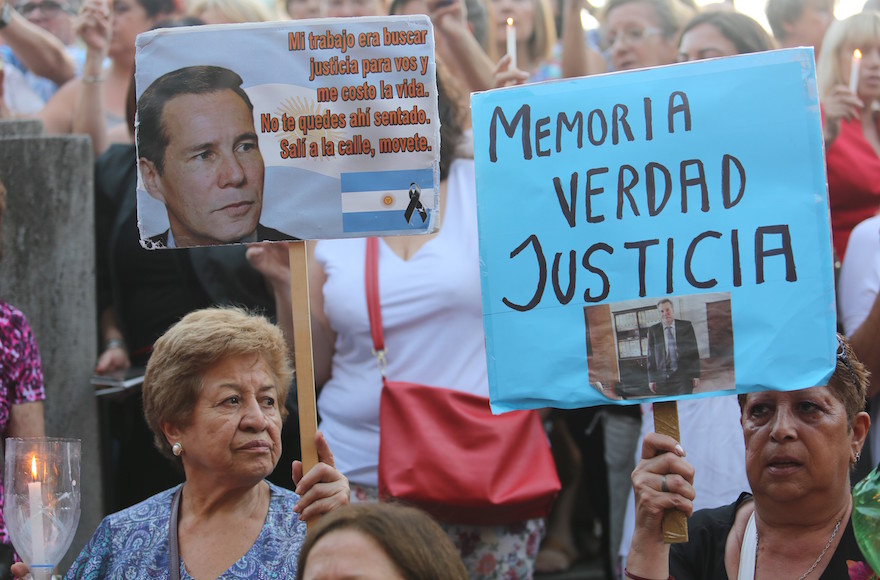 BUENOS AIRES (JTA) — Two years after the death of Alberto Nisman, organizers of tributes to the deceased prosecutor appear hopeful that the circumstances of his death will be clarified.

Tributes were held both in Argentina and Israel on Wednesday for Nisman, who was found dead at his home in the Argentine capital in January, 2015, in the midst of his investigation into the 1994 bombing of the AMIA Jewish Center.

“The is a glimmer of light at the end of the tunnel,” prosecutor German Moldes said Wednesday at a vigil in Buenos Aires. Moldes was one of the three speakers who addressed a crowd in front of the prosecutor’s unit that Nisman had led.

Moldes said that his colleague, Eduardo Taiano, who is leading the investigation into Nisman’s death, has received death threats over the ongoing investigation.

“We must continue working for the truth. How we will give up if Taiano who receives threats on his life does not give up,” Moldes told the crowd of more than 1,000 people.

Writer Federico Andahazi and Luis Czyczewski, the father of one of the victims of the 1994 attack, also spoke during the anniversary tribute in Buenos Aires. Iara and Kala, Nisman daughters, lit a candle in their father’s memory.

In March 2016, the Buenos Aires Criminal Appeals court ruled that the case must be heard in federal court, which has accelerated movement on the case.

On Wednesday, Argentina’s President Mauricio Macri, during his first press conference of 2017, told reporters that the Nisman investigation now “is on the right path.”

A memorial for Nisman was also held Wednesday at the Israeli Knesset during a meeting of the Immigration, Absorption and Diaspora Affairs Committee. One of the speakers was the Argentine-Israeli writer Gustavo Perednik, an expert on terrorism and a friend of Nisman.

“Alberto’s murder has absolutely been proven, there is just no Argentine judge who will say it and declare  it, but this will happen soon,” he said.

We will slowly get to the truth as Nisman hoped,” he added.

Journalist Roxana Levinson and Argentinean ambassador Carlos García also delivered tributes at the Knesset. The Israeli parliamentary session also included representatives from the Ministry of Foreign Affairs, the World Zionist Organization, the Jewish Agency and the Association of Latin-American Immigrants in Israel, or OLEI.