NAHARIYA, Israel (JTA) – On the morning of July 18, 1994, Hana Cohen headed from her apartment to the nearby AMIA Jewish center in Buenos Aires to run an errand. Edith Szerman Kogos walked to a bank a few blocks away. Jose Caro shopped in a store.

The boom of an explosion interrupted their activities, piercing the hubbub of daily life in the Argentinian capital and destroying the building housing the Argentine Israelite Mutual Association. The blast killed 85 people.

For Cohen, Kogos, Caro and other Argentinian Jews now living in Israel, attending the dedication here Wednesday evening of a sculpture memorializing the AMIA victims and the man who died while investigating the bombing, Alberto Nisman, was personal. Within minutes of the explosion, the trio arrived onsite. All had been in AMIA scores of times and knew some of the dead and wounded. 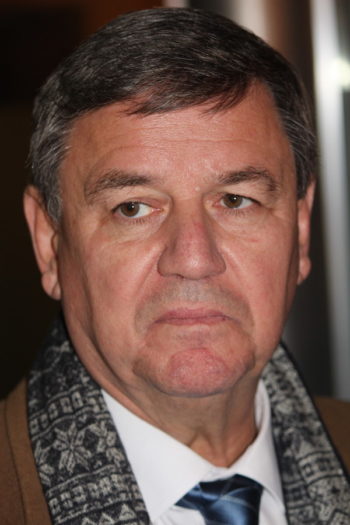 Buenos Aires native Jose Caro attending the unveiling of a memorial in Nahariya, Israel, for the victims of the 1994 AMIA Jewish center bombing and the prosecutor, Alberto Nisman, who died while investigating the case, Jan. 18, 2017. (Hillel Kuttler)

The gathering at an arts center in this northern coastal city came on the second anniversary of Nisman’s death. It attracted approximately 200 people, nearly all immigrants from Argentina and other South American countries. Many expressed anger and skepticism toward the corruption they believe taints their native land’s political system and makes solving crimes like the AMIA bombing unlikely.

Nisman, the investigating prosecutor of the bombing, had just released a report accusing Argentina’s then-President Cristina Fernandez de Kirchner and her associates of whitewashing Iran’s role in the bombing. According to Nisman, the cover-up was part of a plan by the president to trade Argentinian grain for Iranian oil.

Hours before his scheduled appearance in parliament to discuss those findings, Nisman, who was Jewish, was found dead at home of a gunshot wound. The cause of death has been given both as suicide and as murder.

Wednesday’s attendees dismissed the former determination. When the master of ceremonies mentioned the anniversary’s occurring two years after Nisman “died,” several audience members called out, “He was murdered.”

Asked whether he thought his government was involved in the AMIA bombing or in Nisman’s death, Gabriel Jorquera, the deputy head of Argentina’s embassy in Israel, demurred.

“I can not say that. I can’t say anything until the investigation is done. We have to wait until the judicial [system] takes a decision,” Jorquera told JTA before the event. “We only want clarification of the situation, an advance in the investigation and peace in our country.”

To Caro, peace will come when Argentina brings the truth to light.

“I’m very angry with the country. If those responsible aren’t sent to jail, there’ll be no future for the country,” said Caro, an insurance agent who heads the Raanana branch of an Israeli organization of Latin American immigrants.

The steel sculpture was unveiled in Nahariya, home to several thousand of the estimated 80,000 Argentinian Jews living in Israel. It depicts a broken Star of David from whose bent bar hangs half of an imbalanced scale. An exposed slice of the aluminum base reveals a building rod encased in cement.

“Conceptually, it says everything: The Star of David is not only broken but distorted because it resulted in a Jewish community in distress, there is no justice and the broken pedestal is a reminder of the building,” said the sculptor, Israel Ghelman, a Florida resident who is from Buenos Aires.

Ghelman said his mother, Dora, was nearly killed when the bomb ripped the facade off her apartment’s master bedroom across the street. She was folding laundry in another bedroom.

For five years in the mid-1950s, Ghelman trained at AMIA to become a Hebrew teacher.

Another American from Buenos Aires, Los Angeles plastic surgeon Daniel Dunkelman, funded the sculpture. He did so, Dunkelman explained by e-mail, to protest “the lack of justice, the lack of moral integrity and ethical values that prevails” back home. 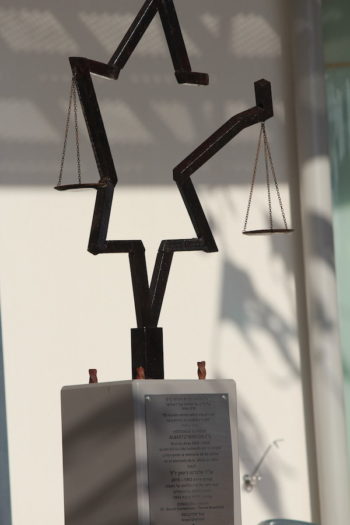 A sculpture by Israel Ghelman is the focal point of a memorial in Nahariya, Israel, for the AMIA bombing victims and prosecutor Alberto Nisman. (Hillel Kuttler)

The lack of justice in the officially unsolved deaths of Nisman, the AMIA victims and the 29 people killed in the bombing of Israel’s Buenos Aires embassy in 1992 leaves Dunkelman in despair. “The so-far worthless pursuit of justice makes it impossible to ignore by any decent human being,” Dunkelman said.

In March 2016, the Buenos Aires Criminal Appeals court ruled that the probe into Nisman’s death must be heard in federal court. No official cause of death has yet been determined. And in December, an appeals court in Buenos Aires cleared the path to a criminal probe into Kirchner’s motives in cooperating with Iran on the AMIA investigation.

In the art center’s courtyard here, others acknowledged the comfortable lives, professional attainments and social standing of many Jews in Argentina, and bemoaned the prevailing anti-Semitism and corruption. The two bombings and Nisman’s demise have soured some on their homeland. All consider him a hero.

“It’s important for the world to know that things like this happened in Argentina, and it can’t be that we still don’t know the truth [of Nisman’s death] after two years,” said Buenos Aires native Israel Horowitz, the rabbi of a conservative congregation here. “We want there to be justice.”

Caro said he has “no interest” in visiting Argentina again. Cohen looks forward to seeing relatives there, but has stopped following the country’s news. Kogos said she’s a “proud Israeli,” but didn’t utilize the adjective in calling herself an Argentinian.

“I know justice will not be done. It’s infantile to think [otherwise],” Kogos said, adding that driving an hour from her home in Migdal Haemek to remember the victims “is like a scream – a scream in the quiet.”