If you take a selfie at a Holocaust memorial, you might be shamed on ‘Yolocaust’ 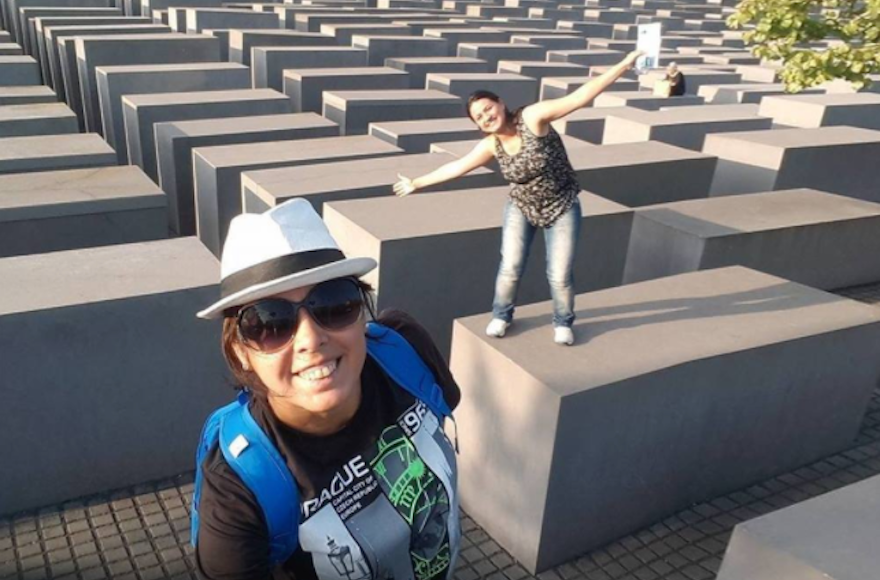 (JTA) — Pass by Germany’s vast national memorial to the murdered Jews of Europe and you will see young visitors hopping from stone to stone, playing hide and seek, stopping for a smoke, taking selfies for Tinder, catching rays.

Israeli-German writer and satirist Shahak Shapira had enough of it.

Shapira, 28, copied a dozen selfies posted online that were taken at the 12-year-old memorial and imposed them over actual photos documenting Nazi crimes. He put the resulting montages on line last week on a website he dubbed Yolocaust — tacking on the acronym for “you only live once” for an extra jolt.

It went viral quickly, as shocking images tend to do.

If you run your cursor over the original photo, the happy, leaping tourists suddenly appear against a much different background.

In one photo, a gleeful girl balanced atop the memorial is suddenly teetering among corpses at the Kaufering slave labor camp in Bavaria as the local population stands staring, forced by liberating American troops to view the scene in April 1945. (Shapira does not identify the historical images, but some are quite famous.)

In another, two fellows who posted themselves as “Jumping on dead Jews” are suddenly seen leaping smilingly over contorted corpses.

And there’s the guy juggling pink balls in a photo he titled “what an incredible place.” Presto, he’s performing his act inside a pit filled with freshly shot victims, seemingly oblivious.

Released the week before International Holocaust Remembrance Day, which commemorates the liberation of Auschwitz by Red Army troops on Jan. 27, 1945, Shapira’s satire has triggered a public debate, much of it carried out on social media. At issue is just how far one can go in using images of suffering to make your point.

Among those chiming in is the memorial’s designer, New York-based architect Peter Eisenman.

“[P]utting those bodies there, in the pictures, that’s a little much if you ask me,” Eisenman told the BBC. “[T]here are no dead people under my memorial. My idea was to allow as many people of different generations, in their own ways, to deal or not to deal with being in that place. And if they want to lark around, I think that’s fine.”

But the director of the nearby Topography of Terror documentation center, at the site of the former Gestapo headquarters, thinks Shapira “puts his finger on a crucial point.”

“I pass by there very often,” Andreas Nachama, who is also the former head of Berlin’s Jewish community, told JTA. “And whenever I walk by I see something which doesn’t make me happy, let’s put it that way.”

It’s not the first time critics have pointed out that visitors are using the memorial, as well as authentic sites of Holocaust history, as backdrops for smiling selfies.

“Instagram seems to work like a Polaroid filter for some people’s brains, turning off the #commonsense function,” blogger Hektor Brehl wrote in the German edition of Vice magazine in 2013.

On his Yolocaust website, Shapira noted that “About 10,000 people visit the Memorial to the Murdered Jews of Europe every day. Many of them take goofy pictures, jump, skate or bike on the 2,711 concrete slabs” of the structure.

He offers to remove a photo if its author contacts him at an email address provided. Two have, and Shapira deleted their pictures, he told the Tagesschau TV news program on Saturday.

“Just imagine, your grandfather – or you – lost your entire family in the Holocaust, or half of them,” Shapira told Tagesschau. “And then you go to Berlin to this memorial, and then you see how someone hops around here on their bicycle, or mountain bike. I don’t know if you’d find it cool.

“And I find it dangerous, that this is becoming normal. It kind of suggests that people are not dealing with the real purpose of this memorial.”