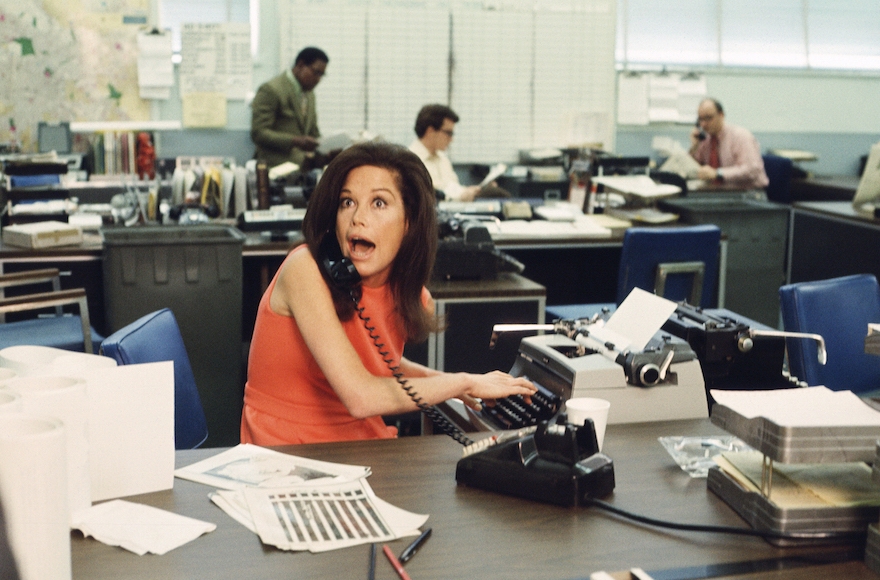 (JTA) — There are plenty of paradigms in the history of humor for how Jews and non-Jews get along, or don’t: as persecutors and victims, as saviors and saved, as allies against a common oppressor.

All these are fraught with the tensions between the powerful and the disempowered, which makes sense: Fear drives humor.

But there is a uniquely American paradigm, one devoid of fear, instead celebrating the Jew as an inextricable part of the national fabric.

Its best exemplar was Mary Tyler Moore, who died Wednesday at 80.

Jews were coming into their own in the American popular imagination in the 1960s and 1970s: Jewish actors like Elliott Gould, Richard Benjamin and George Segal no longer changed their names. They were identifiably Jewish, but without shtick, and they could be villains and heroes, geniuses and brutes, lovers and rivals.

That emergence was a function of the Jewish imagination, advanced by Jewish directors and writers like Elaine May, Harold Pinter, Philip Roth and Mike Nichols.

Mary Tyler Moore was famous in that era for a similar transition from pigeon-holed object – her shtick as the winsome wife on “The Dick Van Dyke Show” – to a more deeply realized creation of her own imagination.

Mary Richards, the character she played in the show she produced with her  husband, Grant Tinker, was single. She supported herself. She had a job that required brains. She would never marry for the sake of marrying.

And she peopled that universe with characters — including Jews, especially Jews — who were as  independent, as fully realized, as devoid of shtick as she was.

Rhoda Morgenstern, Mary Richards’ best friend, played by Valerie Harper, fell in love, adored her parents, lived upstairs, fretted about work and was unabashedly Jewish every second she was onscreen. Rhoda was considered slovenly, Mary was a priss. Rhoda was forward, Mary was shy. But the two thirtysomething unmarrieds genuinely loved one another.

And it wasn’t just Rhoda: The Morgensterns, her parents, were Jewish, the man Rhoda married was Jewish, and Lou Grant, the irascible, difficult boss played by Ed Asner, was likely Jewish as well. (A couple of hints were dropped during the series. Asner, unlike Harper, is Jewish in real life.)

The era saw a lot of onscreen Jews who confounded the old stereotypes. Segal in “The Quiller Memorandum,” scripted by Pinter, screwed over Nazis with zest and humor. Dustin Hoffman did the same in “Marathon Man,” with a script by William Goldman and directed by John Schlesinger. Barbra Streisand, directed by Peter Bogdanovich in “What’s Up, Doc?” seduced with authority and without shame. And Charles Grodin and Jeannie Berlin in “The Heartbreak Kid,” written and directed by May, married and imploded because he was corroded by ambition, and they did it as fully realized Jews.

But the creators and performers in almost all these instances were Jews. Tyler Moore and Tinker, neither Jewish, created Jewish characters just as vital — and as necessary – to expanding the non-Jewish American imagination.

That necessity was made explicit in the 1972 episode titled “Some of My Best Friends are Rhoda.” Our sister site, Jewniverse, reviewed the episode last year. Mary Richards dumps a new friend because she doesn’t get along with Rhoda – in part because Rhoda is Jewish. (That “in part” is important – the show was not didactic; the women don’t get along for a broad range of reasons.)

Joanne, the new friend, is a buyer for a department store, and early in the show she says she travels to New York’s garment district – she jokingly, or half-jokingly, calls it “the most exotic” place she’s traveled to.

At the reveal, in the episode’s final moments, Mary rebukes Joanne when she says she just doesn’t have a lot of Jewish friends – she hasn’t gotten to know them well.

“Even in the garment center?” Mary asks.

Jews are not exotic in this universe: They are at its center, as woven into the fabric as blacks, Latinos and white Christians as homespun as Mary Richards. How can you immerse yourself in the garment business and not befriend Jews? In Mary Richards’ world, it was nuts not to.

As a non-Jew imagining Jews with love and understanding, Tyler Moore was not a pioneer – John Updike did something similar in his Bech novels. (And she loved and understood them in real life, too – her third husband, Robert Levine, was Jewish and had connections in the Jewish organizational world.)

But as an avatar of how America changed in that era – and remembering that era now, when the national fabric appears to be unraveling – she stood out.

Virginia Heffernan, in her obituary for Tyler Moore in The New York Times, notes that Danny Thomas rejected Tyler Moore for the role of his daughter in “Make Room for Daddy,” the 1950s sitcom. Thomas, born to Lebanese parents, thought Tyler Moore’s button nose wasn’t ethnic enough for the role.

Twenty years later, imagining Mary Richards and her friends, that was precisely the point: She wasn’t “ethnic.” She and the family of friends she created were indelibly American.