#WeRemember: Over 200,000 people post their photos to commemorate Holocaust 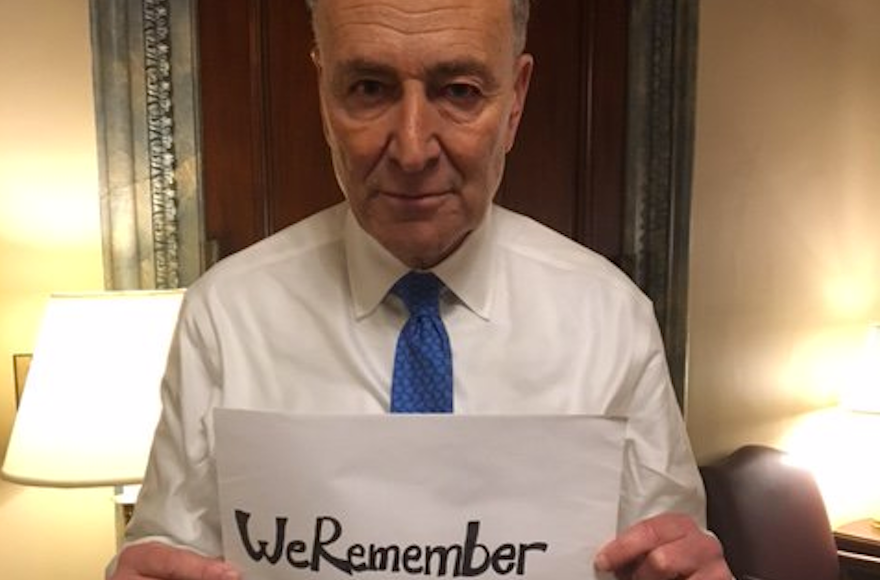 (JTA) — More than 200,000 people from around the world have posted photos of themselves on social media holding signs saying “We Remember” in dozens of languages ahead of International Holocaust Remembrance Day.

The social media campaign was launched two weeks ago by the World Jewish Congress in honor of the commemoration, which is marked each year on Jan. 27, the anniversary of the liberation of Auschwitz.

Many Holocaust survivors have posted their photos, as well as actors, politicians and world leaders. Among those who have joined the campaign are U.S. Sen. Chuck Schumer, Albanian Foreign Minister Ditmir Bushati and members of the European Union Commission.

Thank you to Senator Chuck Schumer @SenSchumer for joining #WeRemember, and for his commitment to Jewish issues. Send us your pic&join too! pic.twitter.com/8LyaRkrZbO

"#WeRemember and share a commitment to commemorate Holocaust victims and to honor those who stood against it." – Albanian FM @ditmirbushati pic.twitter.com/Zuk3yJv8Gy

Children in Pakistan and three generations of a family in Bolivia also participated in recent days.

Thank you for these pictures from Bolivia, spanning 3 generations! Join #WeRemember too: send in your photo with the sign today. pic.twitter.com/sRYefxuqNl

“Anti-Semitism is more prevalent today than it has been at any time since World War II, and bigotry and discrimination still rear their ugly heads all around the world,” World Jewish Congress CEO Robert Singer said in a statement. “This is why we all must declare, together, that we remember.”

“The goal is to reach those who don’t know much about the Holocaust, or who might be susceptible to those who deny it entirely, and to remind the world that such horrors could happen again. Using the tools of social media we hope to engage the next generation, because, soon, it will be their responsibility to tell the story and ensure that humanity never forget.”

Other participants include schoolchildren in a Holocaust history class in Rwanda; Holocaust survivors in Lithuania; an imam in France; the president of the Central Council of Muslims in Germany, as well as others in Ghana, Morocco, Fiji, Uruguay, Chile, Latvia, Germany Kazakhstan, Canada, the United States and other countries. Israeli politicians also participated, including Prime Minister Benjamin Netanyahu, President Reuven Rivlin, Defense Minister Avigdor Liberman, and lawmakers  Yair Lapid and Isaac Herzog.

The Auschwitz-Birkenau Memorial and Museum will screen the photos on the grounds of the former Birkenau death camp on Wednesday and Thursday.