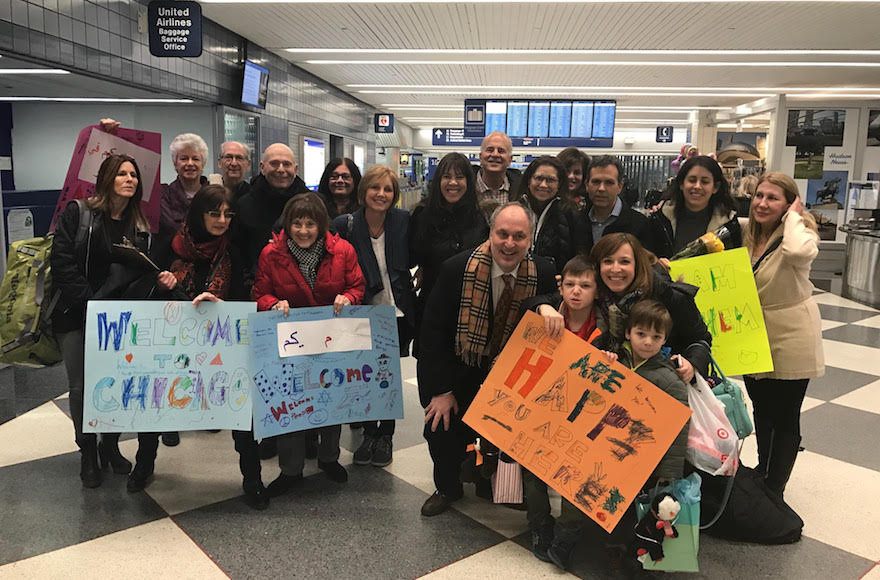 Members of Am Shalom welcoming a Syrian refugee family at O'Hare International Airport in Chicago, Jan. 27, 2017. (Courtesy Am Shalom)
Advertisement

CHICAGO (JTA) — Taylor Clearfield went to the airport Friday to welcome a Syrian refugee family. The next day, she returned with a sign to protest the ban on refugees entering the United States.

President Donald Trump had enacted the prohibition via executive order on Friday afternoon, between Clearfield’s two trips. She had anticipated the development, but hearing that it had actually happened added a sense of urgency to the work she had been doing for refugees through her local synagogue.

“Saturday night, we felt like we were just doing something to add to the momentum of this opposition against Trump’s hateful rhetoric,” said Clearfield, who joined hundreds in demonstrating against the ban. “We couldn’t just go about our regular lives while people are being detained in the airport. I just kept thinking about how I would feel as a mother if I were separated from my family. I would want people to bring awareness.”

Clearfield was one of some 20 members of Am Shalom, a Chicago-area Reform synagogue, who came to O’Hare International Airport on Friday to take in a Syrian family of four. The synagogue has raised $60,000 to help resettle the family in conjunction with a resettlement agency called RefugeeOne, and is now providing food, clothing, furniture, guidance on day-to-day life in the United States and tutoring for the children. Clearfield, a member of Am Shalom’s clothing committee, has contributed socks and underwear.

But the family, which arrived via a refugee camp in Turkey, is one of the last groups of Syrians that will be allowed to enter the U.S. in the near future. Trump’s executive order prohibits for 120 days all refugees from entering the country, with an indefinite ban on those from Syria. Citizens of Iran, Iraq, Libya, Somalia, Sudan, Syria and Yemen are barred from entry for 90 days.

“We didn’t know when the order would be signed,” said Rabbi Steven Lowenstein of Am Shalom. “We were texting and calling each other all throughout those days, not knowing if the family was going to get on the flight, if they were going to make it, not going to make it.” 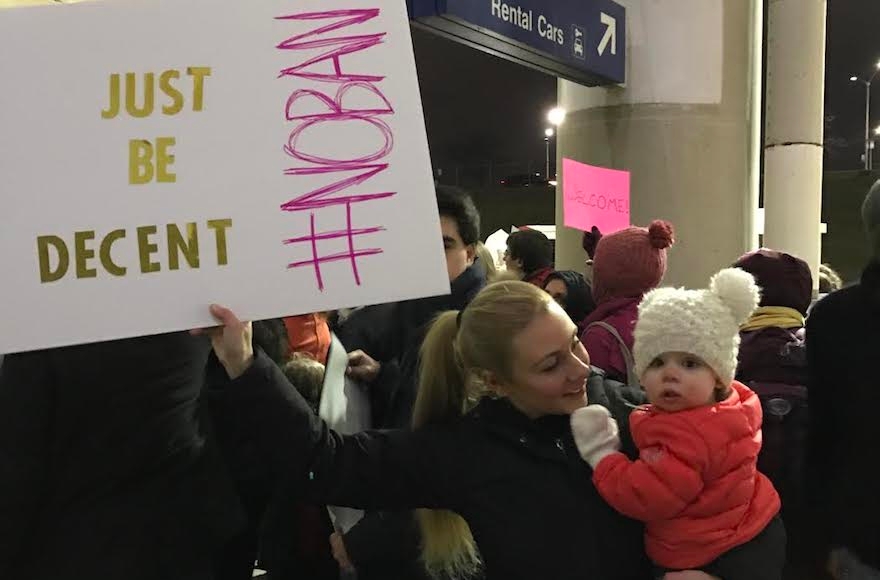 Taylor Clearfield holding a sign, and her daughter, at a protest of the refugee ban at O’Hare Airport, Jan. 27, 2017. (Courtesy of Clearfield)

Am Shalom, which in past decades has welcomed refugees from Cambodia and Chile, decided last year that it wanted to help resettle a Syrian family. It began expediting the process after the election of Trump, who as a candidate had pledged to ban Muslims from entering the U.S..

The synagogue has raised enough money to resettle a second family, and has furniture and other supplies sitting in a storage unit for when Trump’s ban ends.

“We firmly believe our mission is to love the stranger and to welcome the stranger,” Lowenstein said. “We were strangers once, and so many of our congregants can trace their roots to being refugees right in this country. It was very clear to us that this is what we as Jews, we as human beings needed to do.”

Am Shalom is one of several synagogues across the country that have taken an active part in resettling refugees. More than 250 synagogues have joined a campaign by the refugee support and advocacy group HIAS, either by contributing money, educating people about refugees or lobbying elected officials. In addition, 1,700 rabbis have signed a HIAS letter in support of welcoming refugees.

Rabbis and synagogues are adding their names to the HIAS campaign even faster since Trump enacted the ban, according to the group’s president, Mark Hetfield. Now unable to welcome refugees, HIAS is instead focusing on advocacy and legal aid to those who have already been approved for resettlement but barred from entering the United States. One such family was en route to the United States from Jordan but was stopped on a layover in Kiev and deported back to Amman.

“The door has been slammed in the faces of all refugees for the next four months,” Hetfield said. “So we have all these synagogues that were all excited to welcome refugees and help them settle in as new Americans, and Trump has decided to slam the door in their faces, and we’re all outraged.”

Clearfield said her decision to protest Saturday came partly because of her grandparents’ experience fleeing the Holocaust. She and her family came to the O’Hare demonstration with a sign reading “Just be decent #NoBan.”

“Thinking of [my grandparents] desperately trying to get to the United States, there’s a parallel between them and this [Syrian] family,” Clearfield said. “I wanted to do whatever we could. I think there’s a lot of uncertainty right now. All we can really do is make our voices heard.”