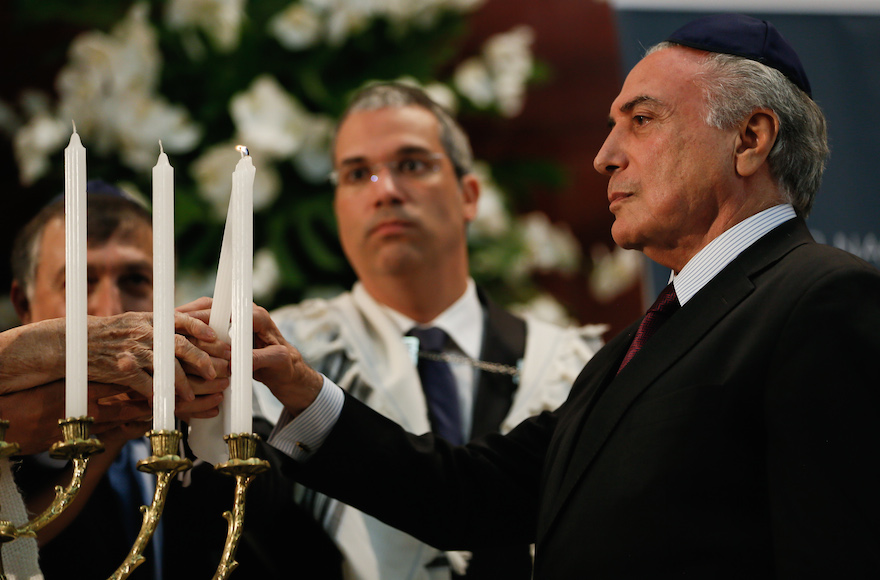 The president was invited during Sunday’s service at the Congregacao Israelita Paulista synagogue in Sao Paulo to light one of six candles in honor of the 6 million Jewish victims of the Holocaust. The remembrance day was officially Friday.

“Remembering the Holocaust in all its pain and anguish is preparing the future,” Temer said. “It stands to all of us as a lesson. One day may pass, one month may pass, years may pass, centuries may pass, we must remember the Holocaust for it’s a lesson for the future and for the present time.”

“How many words have been spoken here to reveal the intolerance that exists in the world,” Temer also said. “May this act be spread across our country and abroad in these times of revelation of tolerance, of temperance, of what must unite and reunify people.”

Temer, 75, a political centrist, was sworn in last May amid the impeachment process of leftist leader Dilma Rousseff, whose Worker’s Party had an openly anti-Israel platform. Temer, the son of Lebanese Maronite immigrants, had been vice president since 2011.

The Congregacao Israelita Paulista, which has 2,000 families, is affiliated with the Conservative and Reform movements.

Brazil is home to some 120,000 Jews, half living in Sao Paulo. In 2016, some 700 Brazilians made aliyah to Israel, more than three times the annual average of about 200 new Brazilian immigrants and a 45-year record for the South American country.