In rare unity, Orthodox and liberal denominations are critical of Trump refugee ban 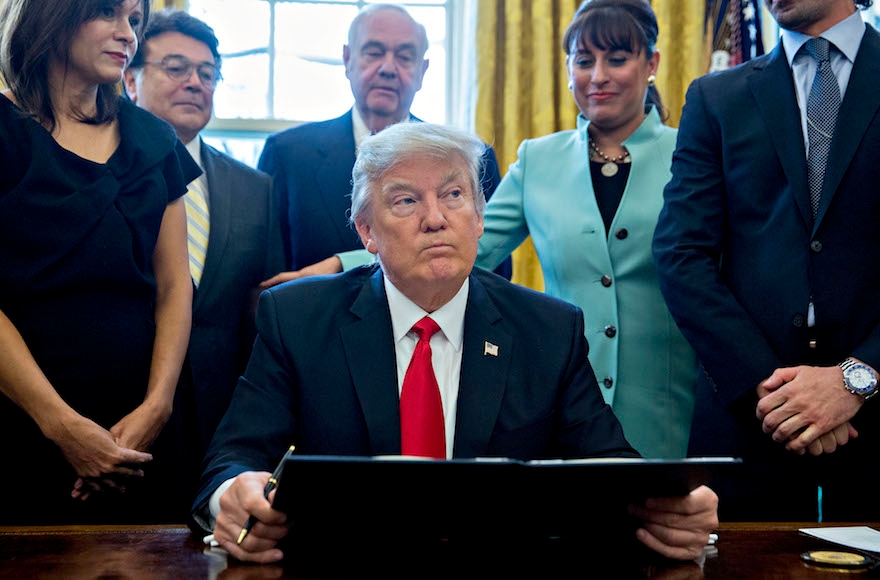 (JTA) — Two large groups representing Orthodox Jews responded to President Donald Trump’s executive order barring migrants from seven mostly Muslim countries and refugees from around the world by warning against policies that would place any limits on immigration based on religion.

With the combined statement by the Orthodox Union and Rabbinical Council of America, all four major American Jewish denominations have criticized the executive order in some form. The Reconstructionist movement condemned the statement ahead of its signing Friday, while the Reform and Conservative movements condemned it on Saturday and Sunday, respectively.

The Orthodox statement came Sunday night. It was first issued in December 2015 after Trump called for banning the entry of Muslims into the United States.

It is extremely rare for all four movements, which have split on everything from LGBT rights to Israel policy, to unite in opposing a presidential action.

While the Orthodox organizations said they recognize the need for protections against terrorists, they urged the administration to protect religious freedom.

“We call on all Americans to reaffirm that discrimination against any group based solely upon religion is wrong and anathema to the great traditions of religious and personal freedoms upon which this country was founded,” the statement says, and calls on “the United States government to recognize the threats posed by radical Islamists, while preserving and protecting the rights of all people who seek peace, no matter how they worship God.”

Trump has denied that Friday’s executive order is a ban on Muslims, although the statements by the Reform and Conservative movements both assert that the policy is tantamount to a religious test for refugees, travelers and migrants. The executive order prohibits for 120 days all refugees from entering the country, with an indefinite ban on those from Syria. Citizens of seven Muslim-majority countries, including Iran, Iraq, Libya, Somalia, Sudan, Syria and Yemen, are barred from entry for 90 days.

A range of Jewish groups have opposed the order, and Jews joined protesters at airports across the country on Saturday to protest the ban.

The Zionist Organization of America appears to be the only major Jewish group to unreservedly support the executive order.