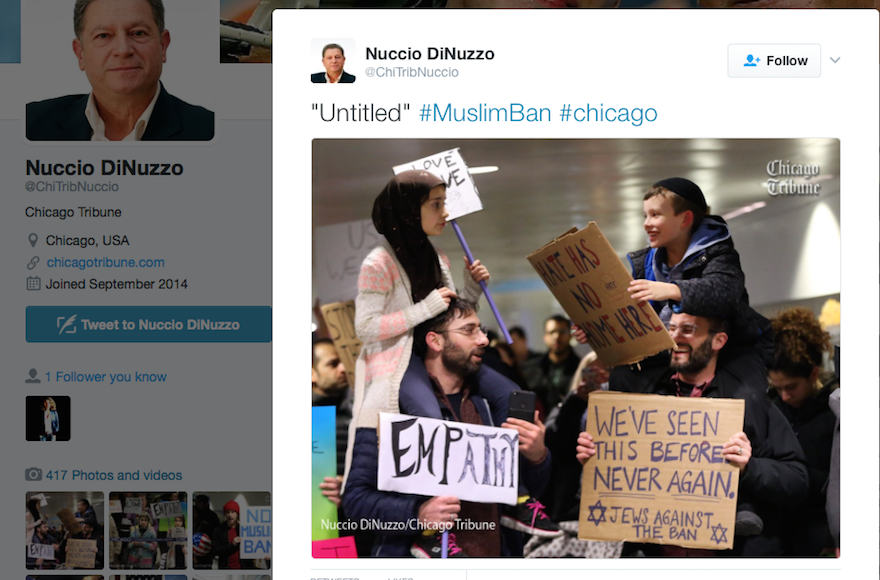 This image of a Muslim girl and Jewish boy has been retweeted over 220,000 times. (Screenshot from Nuccio DiNuzzo/Twitter)
Advertisement

Thousands of demonstrators — including many Jews — flooding airports across the country this past weekend to protest President Trump’s executive order temporarily banning travel from seven Muslim-majority countries. The Internet has been saturated with images from the various protests.

But this photograph has perhaps resonated the most on social media.

The photo, taken by Chicago Tribune photographer Nuccio DiNuzzo, shows a Jewish boy wearing a kippah and a Muslim girl wearing a hijab holding protest signs while they both sit on their fathers’ shoulders at Chicago’s O’Hare International Airport. The Jewish boy’s father’s sign, like many other Jewish-themed signs seen at this weekend’s protests, references the Holocaust.

It has also been shared on Facebook thousands of times, including by former San Francisco mayor and current California Lieutenant Governor Gavin Newsom.

Bendat-Appell explained to the Tribune that Adin’s maternal grandparents were Holocaust survivors who themselves spent time in refugee camps.

“Our tradition is not ambiguous about remembering our history for the sake of acting out in this world today,” he said.