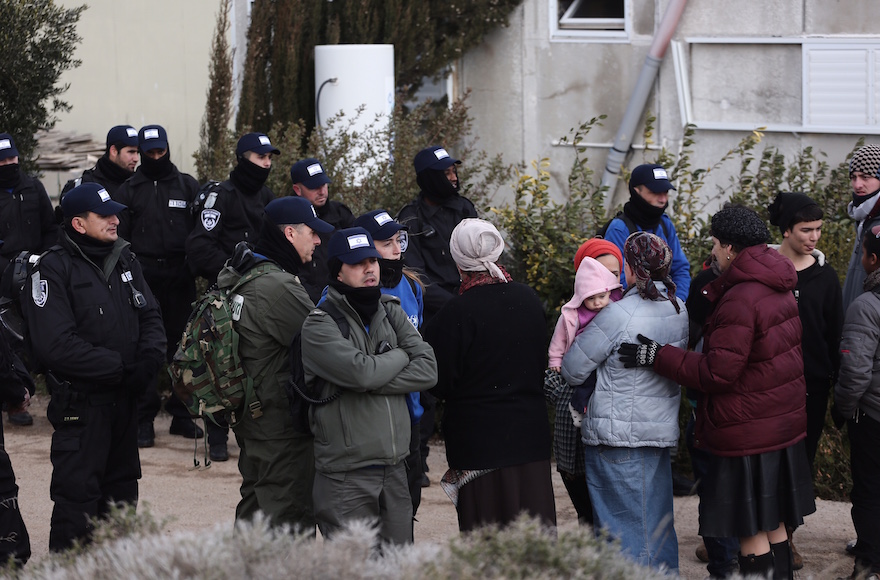 Israeli security forces gathering ahead of the evacuation of the Amona outpost, Feb. 1, 2017. (Miriam Alster/Flash90)
Advertisement

JERUSALEM (JTA) — Police and security officers evacuating homes in the West Bank outpost of Amona were greeted by hundreds of activists, including some throwing stones.

Hundreds of police entered Amona on Wednesday morning to carry out the court-ordered evacuation. The activists, including many teens, have stationed themselves in homes and the outpost’s synagogue.

Some police were hit and injured by rocks even before the evacuation started. At least one officer was hit in the face with caustic material, believed to be bleach. Television cameras showed her flushing out her eyes with water.

Some 13 police officers were wounded and four protesters arrested in the first hours of the evacuation.

The Israel media estimated between 1,000 and 2,000 protesters were on and around the outpost, which is home to about 40 families.

On Tuesday, police sealed the roads leading to the outpost to all but authorized vehicles in an attempt to prevent protesters from gathering. Many headed to Amona on foot, walking through fields and unpopulated areas to reach the outpost.

The Supreme Court has ruled that Amona is an illegal settlement built on appropriated Palestinian land. At least three demolition orders have been issued since 1997.

The police began removing barriers covering the windows of the outpost homes and the synagogue in order to forcibly enter the buildings. Police were seen carrying out teenage protesters filling the homes — with four officers carrying out each protester.

At least seven families agreed to leave their homes voluntarily.

Police released a statement after entering the outpost.

“Israeli police are acting with restraint in order to allow those families of settlers who wish to evacuate. However, those who abuse this restraint and act violently toward police we be dealt with accordingly,” it said. “Israeli police have been attacked by anarchists who have thrown objects at them, causing injuries to the eyes of several police officers, who needed to receive medical treatment. Police will not allow this and will act accordingly.”

Many Amona parents sent their young children to the nearby Ofra settlement on Wednesday morning ahead of the arrival of the police and the start of the evacuation.

Smotrich compared the evacuation to a woman being raped.

“The evacuation won’t be violent because the people aren’t violent, but it will hurt just like when something terrible happens, it hurts,” he said. “When someone rapes a woman it hurts. What they’re doing here now is a brutal rape. They’re going to remove innocent people from their home.”

The comparison was condemned by opposition lawmakers.

Rabbi David Lau in a video released on social media called on the residents of Amona and Ofra and activists who have gathered there not to act violently against security forces during the evacuation.

“The evacuation of the community and the families living in it causes sorrow and great pain. However, it is obligatory to respect the law and not to behave violently toward any person, let alone against security forces who spend day and night protecting the people of Israel. And so it is up to each and every one to act only in accordance with halacha and the law,” Lau said, referring to both Jewish and civil law.

The evacuation is going forward despite the suspension of a plan to relocate many of the residents to an adjacent hilltop. The suspension was approved after Palestinians filed claims to that land.

The relocation was part of a deal reached between the residents and the government to ensure a peaceful evacuation. Under the agreement, 24 homes would be built on the new hilltop and 16 other families would be assisted in finding homes nearby.