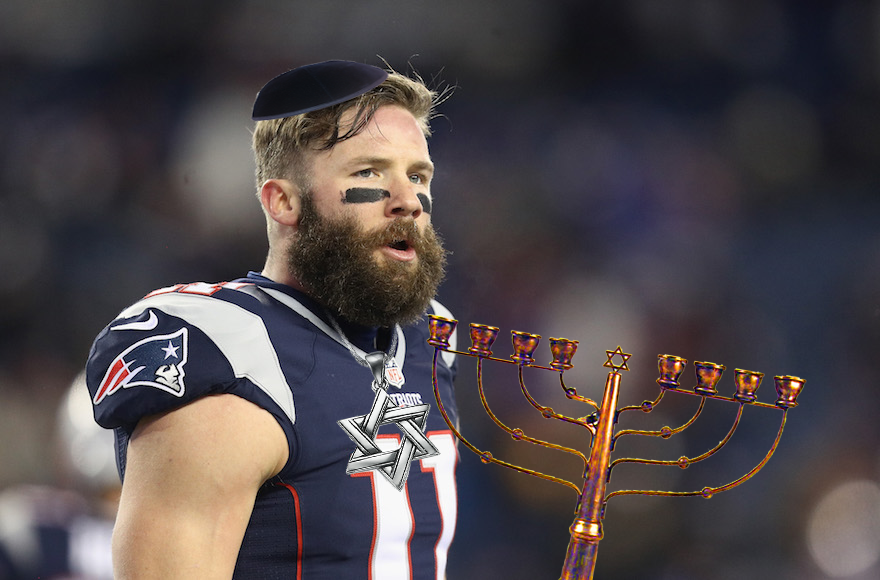 Julian Edelman can safely be called the best Jewish player in the NFL. (Getty Images)
Advertisement

(JTA) — Is it starting to feel like the New England Patriots make it to the Super Bowl every year? That’s because it’s almost true: The team has made seven appearances in the big game since 2000.

On Sunday, the Pats will face off against the Atlanta Falcons in Super Bowl LI.

One of the Patriots’ most valuable players — and quarterback Tom Brady’s favorite wide receiver target — is Julian Edelman, 30, who could safely be called the best active Jewish player in the NFL.

He showcased his skill yet again in this season’s playoff stretch, tallying 118 yards and a touchdown against the Pittsburgh Steelers in the American Football Conference championship game and 137 yards against the Houston Texans.

Until recently, there was some debate over whether Edelman was Jewish — the Patriots maintained that he was raised Christian, despite having a Jewish father. But since identifying himself as a member of the tribe during a 2013 interview on the NFL Network, Edelman has shown his Jewish pride a number of times. Here are five of those moments.

The time he wore an Israel pin

In a game against the Denver Broncos in November 2014, Edelman was spotted sitting on the team bench wearing a pin on his hat with the U.S. and Israeli flags. It was reportedly given to him by Israel’s then-ambassador to the United Nations, Ron Prosor, before the game.

Edelman is one of the savviest pro athletes when it comes to social media. With the help of the Boston-based company Superdigital, he has branded himself as an amiable goof by posting comedic videos of himself online. As an aside, it’s worth noting that his brand logo JE11, a combination of his initials and jersey number, looks almost like the word “Jew” in the right light. In April 2015, he posted a photoshopped image of himself catching a piece of matzah as a friendly Passover greeting.

Edelman and his sister Nicole were among the first passengers to try the new direct flight to Israel from Boston’s Logan International Airport in the summer of 2015. 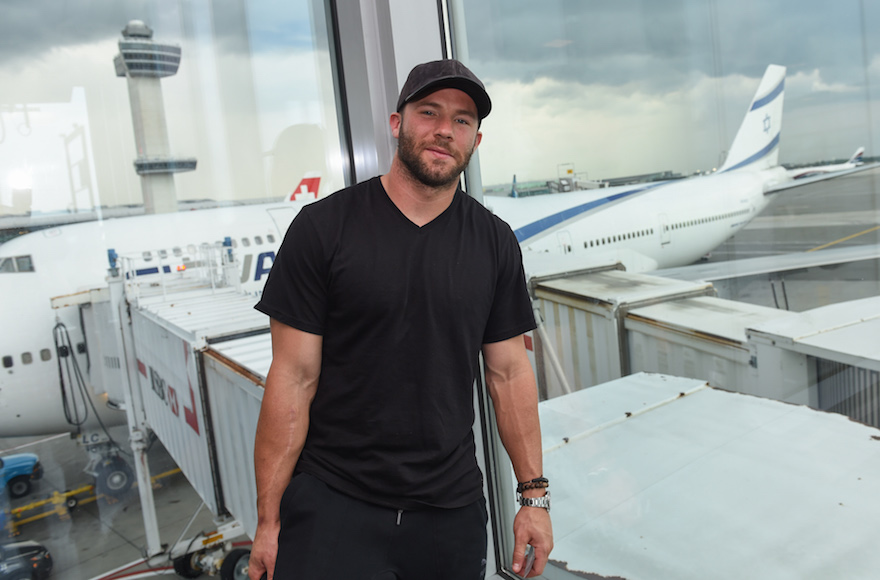 His well-documented first trip to Israel

After Edelman touched down in Israel — with representatives of the Combined Jewish Philanthropies of Greater Boston and a group of Boston-area young adults — he made the most of his first visit, doing everything from praying with tefillin to tossing the pigskin with members of Israel’s national football team. He captured his journey in a produced video.

“Exploring my heritage is something I started in the past few years and seeing Israel for the first time, really getting a sense of its history and culture, I now truly understand why it’s so special,” he said in a news release.

On the American Jewish Historical Society list of the 10 best Jewish football players, Edelman was ranked behind only Hall of Famers Sid Luckman, Ron Mix and Benny Friedman. That’s formidable company: Luckman led the Chicago Bears to four NFL championships between 1940 and 1946, and Friedman was known as one of the game’s first great quarterbacks. Mix, an offensive lineman mostly for the San Diego Chargers, was named to the all-time team of the American Football League.