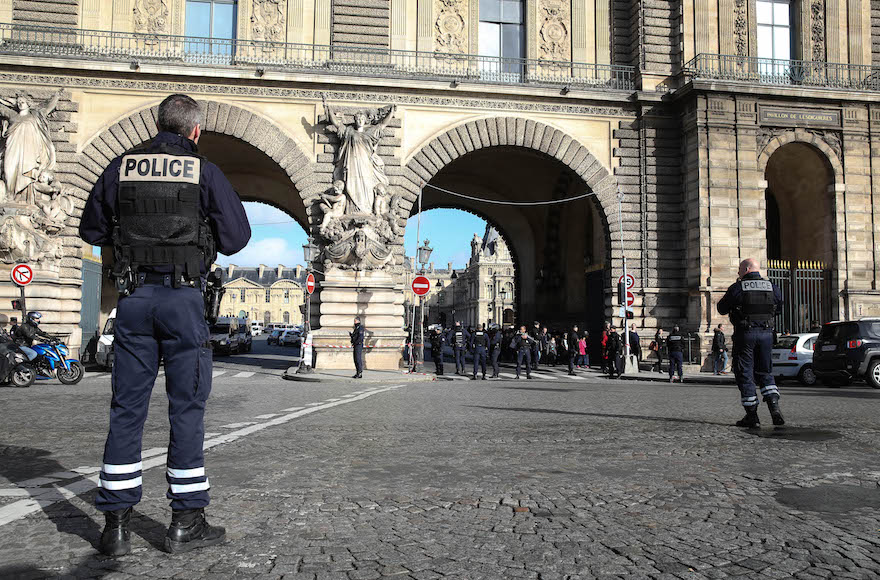 Police on guard after a French soldier shot a knife-wielding man at the Carrousel du Louvre in Paris, Feb. 3, 2017. (Nicolas Kovarik/IP3/Getty Images)
Advertisement

In the incident Friday morning, a soldier shot and seriously wounded a man wielding a machete who shouted “Allah hu akbar” — Arabic for “Allah is the greatest” – while approaching the soldier with the weapon. Paris Police Commissioner Michel Cadot was among the officials who said the alleged assailant shouted about Allah during the incident.

The soldier, one of 12,000 troops deployed in 2015 around Jewish sites and tourist areas in France in response to deadly jihadist attacks, was not hurt, Le Figaro reported. The deployment followed the slaying of 17 people at and around the Charlie Hebdo magazine in January 2015, and the murder two days later of four Jews at a kosher store in Paris.

“I am concerned following this attack, which bears terrorist characteristics, in the heart of Paris,” Francis Kalifat, the president of the CRIF umbrella group of French Jewish communities, wrote on Twitter. “Support for police and troops.”

CRIF has consistently expressed gratitude to security forces when they come under attack.

Gil Taieb, a vice president of the CRIF, last year led a delegation from his organization to a rally at Republique square in Paris, where some 3,000 current and former members of the security forces demonstrated in civilian clothing against “anti-cop hatred,” as the organizers of the demonstration defined it.

The rally took place following violent clashes between police and protesters in rallies.