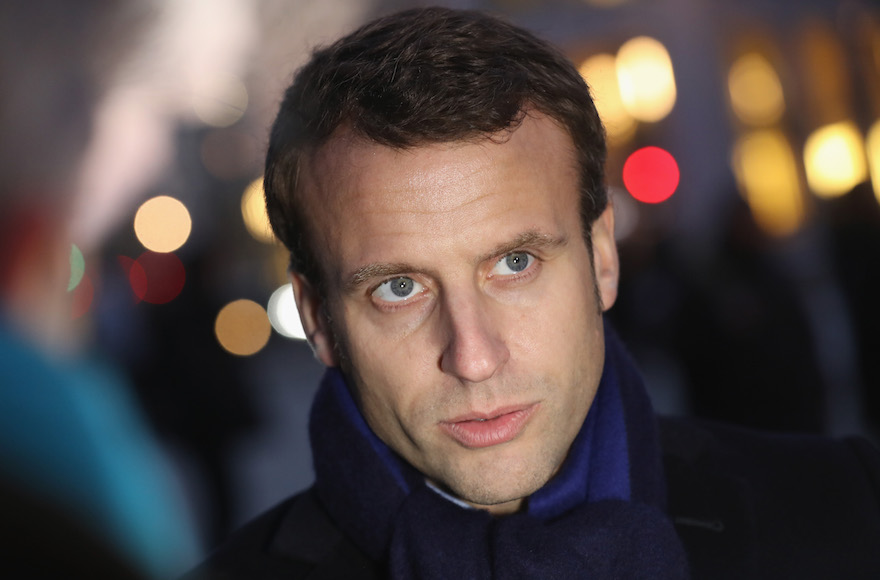 A banker who is 18 years younger than the average age of past presidents in France, Macron was widely regarded as doomed only two weeks ago, as no president from outside one of the country’s main parties has ever been elected.

But fears over growing radicalization in society and recent upsets within the political establishment have made Macron the best bet among centrists, including many Jews.

“Macron is becoming a very strong candidate with the potential of occupying a very large electorate, and his popularity is considerable among French Jews,” said Richard Prasquier, chairman of the France branch of the Keren Hayesod Zionist group and a former leader of the CRIF umbrella of French Jewish communities. “It’s astounding.”

From fourth and fifth place in the polls, Macron has swept past former Prime Minister Francois Fillon of the center-right Republicans party, as well as Benoit Hamon of the ruling Socialists. Macron has never held elected office, but served as a Cabinet minister under Francois Hollande, a Socialist. He also served as a senior finance official under Nicolas Sarkozy of the Republicans.

Macron’s good looks, profound understanding of the economy, social media skills and unassuming style have not hurt his campaign. He has won over many voters with concerns over radical Islam by vowing to act tough whenever it conflicts with French laws — but has courted liberals by promising not to harass Muslims who abide by those laws.

But his bipartisan agenda against polarization has really struck a chord.

“Left wing, right wing – it no longer means anything,” Macron declared in a campaign speech on Saturday in Lyon.

“Do you need to be left wing to be moved by Francois Mitterrand’s great speeches on Europe? Do you need to be right wing to feel pride at Jacques Chirac’s speech at Vel D’Hiv?” — a reference to a famous 1995 address in which the then-president accepted the French state’s responsibility for the fate of thousands of Jews during World War II.

Pundits attribute his meteoric rise in no small part to his rivals’ problems, including the radical policies of Hamon and the alleged corruption of Fillon.

On the left, the Socialists chose Hamon, who objects to suggestions that radical Islam poses a problem in France. He has also promised to pay each citizen a basic salary of $800 without explaining how to pay for it and not increase the country’s approximately $2 trillion debt.

Valls, a hard-liner whose passionate defense of Jews and French secular values endeared him to some voters, was detested by many others for supporting a ban on the full-body burkini bathing suit favored by devout Muslim women and his association with Hollande’s deeply unpopular presidency.

“Valls appealed to the Jewish electorate in a way no other candidate did,” Gilbert Werndorfer, a French-Jewish writer and editor from Paris, told JTA.

Valls is married to a Jewish woman and is the only French prime minister known to have publicly called anti-Zionism a form of Jew-hatred.

“I would’ve voted Valls, but I will most certainly not vote for the Socialists now because I cannot vote for Hamon,” Werndorfer said.

In addition to the concerns of many centrists over Hamon’s economic policies and his “ambiguity on jihad,” as Valls termed it, Jewish voters specifically were shocked when Hamon said the Socialist Party should criticize Israel and make pro-Palestinian gestures to appeal to Muslim votes.

Supporting a unilateral declaration of statehood by the Palestinians was the Socialist Party’s “best way to recoup our electorate in the suburbs and the neighborhoods” – code for Muslim voters — “who did not support the pro-Israeli position taken by President Francois Hollande,” Hamon told Le Parisien in 2014.

No candidate is expected to obtain a majority in the first round of balloting. In the Feb. 4 compilation of major polls by BFM TV, Hamon was seen as winning 16.5 percent of the vote and is not expected to make the second and final round on May 8.

“Much like the leader of Labour in Britain, Hamon is practically unelectable,” Prasquier said.

Hamon’s rival on the right, Fillon of The Republicans, is doing only slightly better with 19.5 percent, trailing Macron by 3 points.

But Fillon’s candidacy is in jeopardy amid reports regarding his wife’s drawing of a salary as his parliamentary aide. The claims have prompted a criminal investigation to determine whether she was paid without actually working.

While his vows to act tough on radical Islam have earned Fillon a certain following, he antagonized Muslims and Jews when he said in November that Muslims must be forced to integrate the same way that Jews were, suggesting they were disloyal to the state after gaining their emancipation in the 18th century.

His words, which Fillon has not retracted, deeply offended members of the deeply patriotic Jewish community of France, where in synagogues a daily prayer is recited for the well-being of the republic.

Even before Fillon’s controversial remark on Jews and Muslims, he was unpopular among many French liberal Jews.

Whereas Sarkozy appealed to many French Jews with a pro-Israel agenda, most still feel at home left of The Republicans, Werndorfer said.

“I don’t think anyone from my family votes for the right,” he added.

But a growing number of French citizens, including Jews, are nonetheless voting right wing – including for Marine Le Pen of the far-right National Front party founded by her father, the Holocaust denier and anti-Semite Jean-Marie Le Pen. National Front is ahead in most polls with more than 25 percent, and for the first time under Marine Le Pen may make it to the second round.

Still, Marine Le Pen’s presidential prospects appear slim, as left- and right-wing voters will likely put aside their differences and vote en masse for whomever is running against her in a pattern known in France as a “Republican front.”

Part of National Front’s success can be attributed to Le Pen’s efforts to soften her party’s image by expelling anti-Semites – including her father last year – and refocusing its opposition messaging on the effects of immigration, especially from Muslim countries.

She has repeatedly called for banning both Muslim garb and the Jewish kippah from certain public spaces, explaining that while only Muslim garb represents a threat to France’s values, Jews must be ready to “make a sacrifice” in the interest of equality. She has called for Jews to vote for her, promising to be their “shield” against radical Islam.

Many Jews find her ideas outrageous, but a growing number are willing to go along. A 2015 survey showed that since she took over the National Front in 2011, support for the party among Jewish voters went from being negligible to reaching 13.5 percent. Some believe it has since risen even further.

To Michael Amsellem, a 35-year-old French Jewish entrepreneur who will vote for Macron, both Le Pen’s popularity and Hamon’s primaries victory “are signs of despair,” he said.

“This is why Macron gives me and so many others what we most need now: hope,” he added.