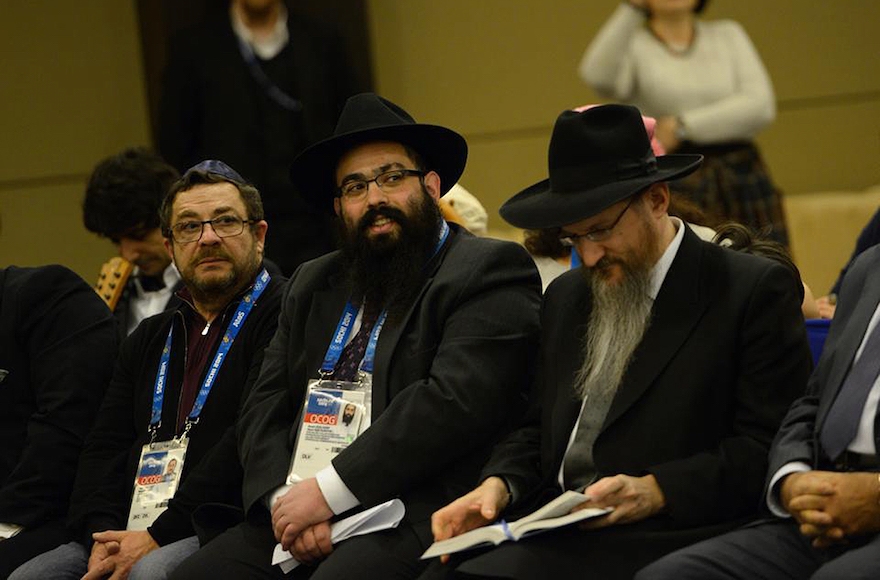 Ari Edelkopf, with the black beard, and Berel Lazar, right, listening to a speech at a reception of the Federation of Jewish communities of Russia in Sochi, Russia, Feb. 9, 2017. (Courtesy of FJR)
Advertisement

(JTA) — Three years ago, Rabbi Ari Edelkopf and his wife, Chana, worked around the clock for weeks to show off their community and city to the many foreigners in town for the Winter Olympics in Sochi.

The Chabad emissaries from the United States came to the city on Russia’s Black Sea coast in 2002. By the time the Olympics opened, they could offer three synagogues, five information centers and 24/7 kosher catering to thousands of people in the city, which has only 3,000 Jews.

The Edelkopfs were celebrated in the local media for these considerable efforts, which the Kremlin marketed as proof that Russia welcomes minorities — including by inviting a Russian chief rabbi to speak at the opening.

This month, the couple is in the news again but for a different reason: They and their seven children have been ordered to leave Russia after authorities flagged Ari Edelkopf as a threat to national security — a precedent in post-communist Russia that community leaders call false and worrisome, but are unable to prevent.

Occurring amid a broader crackdown on foreign and human rights groups under President Vladimir Putin, the de facto deportation order against the Edelkopfs is to many Russian Jews a sign that despite the Kremlin’s generally favorable attitude to their community, they are not immune to the effects of living in an increasingly authoritarian state. And it is doubly alarming in a country where many Jews have bitter memories of how the communists repressed religious and community life.

The Edelkopfs’ deportation order drew an unusually harsh reaction from the Federation of Jewish Communities of Russia, a Chabad-affiliated group that has maintained friendly and mutually beneficial ties with Putin.

The order, which included no explanation or concrete accusation, “raises serious concerns for the future of the Jewish communities in the country,” Rabbi Boruch Gorin, a federation spokesman, told the L’chaim Jewish weekly last week. Gorin is a senior aide to Beral Lazar, the chief rabbi who spoke at the Sochi opening ceremony.

Gorin also called the order “an attempt to establish control” on religious communities in Russia, including the Jewish one, which he said is serviced by some 70 Chabad rabbis, half of whom are foreign.

Many Sochi Jews consider Edelkopf, a Los Angeles native, a popular and beloved spiritual leader with an impeccable record and a close relationship with Lazar. They reacted with dismay and outrage to the deportation order.

“This is absurd,” Rosa Khalilov wrote in one of the hundreds of Facebook messages posted to Edelkopf’s profile, in which he offered updates from his failed legal fight to stay in Russia. “Deportation without proof and thus without proper defense for the accused. I am utterly disappointed.”

Typical of such discussions, comments by Russian speakers abroad tended to be more outspoken than the ones authored domestically.

“Somewhere along the way our country changed without our noticing,” wrote Petr Shersher, a 69-year-old Jewish man from Khabarovsk who lives in the United States. “We’re suddenly not among friends and compatriots but in another brutal and indifferent atmosphere.”

Since the fall of communism in 1991, the Federation of Jewish Communities of Russia — essentially Chabad’s Russia branch, and by far the country’s largest Jewish group — only on a very rare occasion had publicly questioned the viability of Jewish life in the country or the authorities’ tolerance of religious freedoms.

The strong reactions to the Edelkopf edict seem to be less connected to the actual expulsion – at least seven rabbis have been sent packing over the past decade over visa and residence issues — than to the assertion that Edelkopf endangers Russia, a claim the rabbi denies.

“This serious allegation is a negative precedent that we had never seen directed at a rabbi before in Russia, and it is a very, very big problem for us,” Gorin told JTA. “What are they saying? Is he a spy? We can remember very well the times when Jews were last accused of endangering state security,” he added in reference to anti-Semitic persecution under communism.

Behind the expulsion of Edelkopf and the other rabbis, Gorin added, is an attempt by the state to limit the number of foreign clerics living in Russia – an effort that has led to expulsions not only of rabbis but also of imams and Protestant priests.

“It’s not targeting the Jews,” he said.

Alexander Boroda, the president of Gorin’s federation, told Interfax that he was “dismayed” by the expulsion and suggested it was the work of an overzealous official eager “to check off the box” after being ordered to curb immigration.

Boroda also told Interfax that the deportation was not anti-Semitic. He recalled how Putin’s government has facilitated a Jewish revival in Russia — including by returning dozens of buildings; educating to tolerance; adding Jewish holidays to the national calendar, and offering subsidies to Jewish groups. Lazar, who was born in Italy, often contrasts the scarcity of anti-Semitic violence in Russia with its prevalence in France and Great Britain.

The government has also tolerated criticism by the Chabad-led community. Under Lazar and Boroda, the Federation has largely ignored xenophobia against non-Jews but consistently condemned any expression of anti-Semitism — including from within Putin’s party and government.

The federation even spoke out against Russia’s vote in favor of a UNESCO resolution last year that ignores Judaism’s attachment to the Western Wall in Jerusalem.

Still, the Edelkopf deportation is part of a string of recent incidents in which Jews have suffered the effects of growing authoritarianism in Russia – a country where opposition figures are routinely prosecuted and convicted. Since 2012 the country has slipped in international rankings of free speech and human rights; Freedom House’s “Freedom on the Internet” index slipped recently from “partly free” to “not free.”

Under legislation from 2012, a Jewish charitable group from Ryazan near Moscow was flagged in 2015 by the justice ministry as a “foreign agent” over its funding from the American Jewish Joint Distribution Committee and its reproduction in a newsletter of political op-eds that appeared in the L’chaim Jewish weekly. 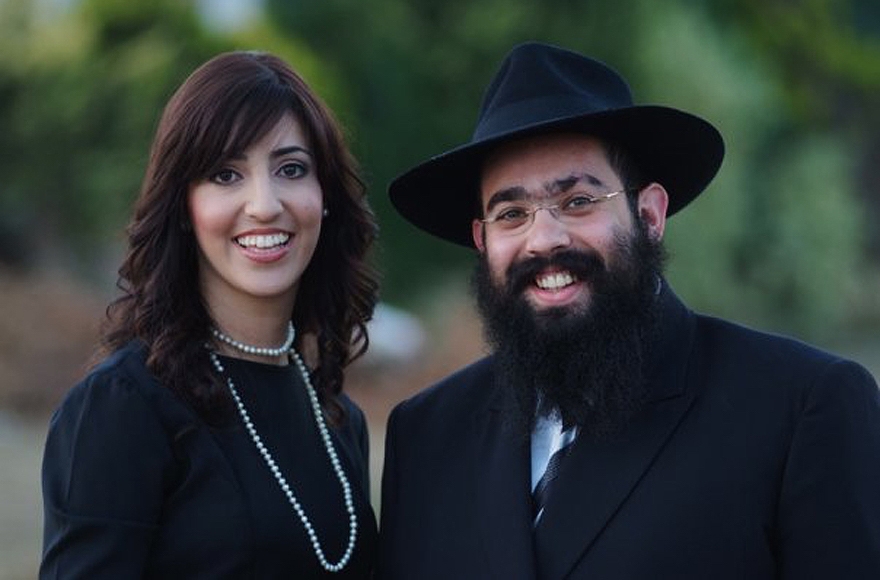 Ari Edelkopf and wife Chana in 2009 in Sochi, Russia. (Courtesy of Federation of Jewish Communities)

Last year, a court in Sverdlovsk convicted a teacher, Semen Tykman, of inciting hatred among pupils at his Chabad school against Germans and propagating the idea of Jewish superiority. Authorities raided his school and another one in 2015, confiscating textbooks, which some Russian Jews suggested was to create a semblance of equivalence with Russia’s crackdown on radical Islam.

Before that affair, a Russian court in 2013 convicted Ilya Farber, a Jewish village teacher, of corruption in a trial that some Jewish groups dismissed as flawed, in part because the prosecution displayed some anti-Semitic undertones in arguing it.

While the incidents differ in their local contexts in the multiethnic behemoth that is Russia, seen together they demonstrate that the Jewish minority not only thrived under Putin but is feeling the “collateral damage as the government drastically tightens its grip on all areas of life,” according to Roman Bronfman, a former Israeli lawmaker from Ukraine and a staunch critic of Putin.

Natan Sharansky, the chairman of the Jewish Agency, recently named the anti-democratic measures of Putin’s government — along with the halving of the Russian ruble against the dollar amid sanctions and dropping oil prices — as a major catalyst for an increase in immigration to Israel by Russian Jews.

Last year, Russia was Israel’s largest provider of immigrants with some 7,000 newcomers to the Jewish state, or olim – a 10-year high that saw Russia’s Jewish population of roughly 250,000 people lose  2 1/2 percent of its members to Israel.

“I don’t know if Jews are leaving because of these steps,” he said, referring to limitations on freedom of speech and other liberties in Russia. “But I think it’s a testament to the revival of the community, which has instilled Jewish identity to provide many olim, whereas 15 years ago this phenomenon just didn’t exist.”