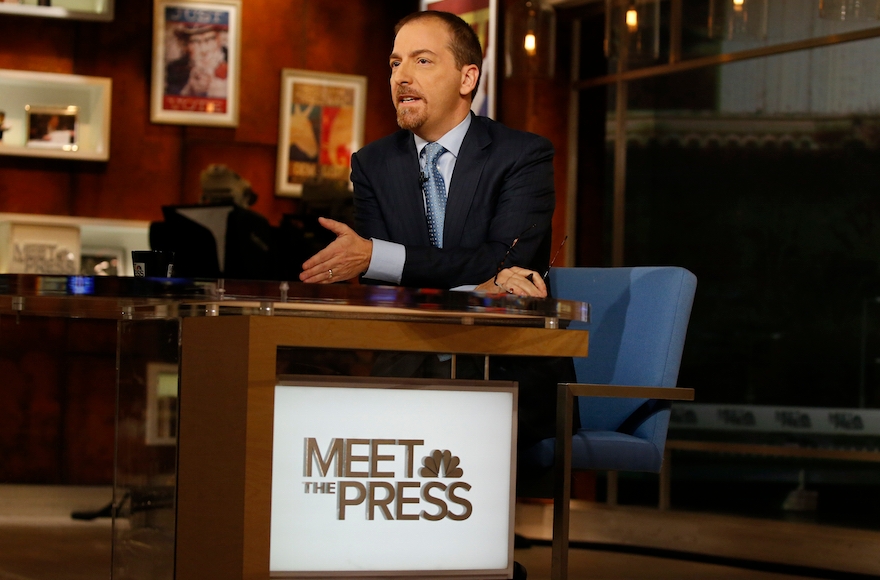 (JTA) — Asked twice in two days to address an uptick in anti-Semitic attacks during and after the 2016 presidential campaign, Donald Trump answered in ways that left many observers baffled. On Wednesday, asked about anti-Semitism during a joint news conference with Israeli Prime Minister Benjamin Netanyahu, Trump answered by talking about his Electoral College victory and pointing to his Jewish daughter and son-in-law.

The next day, in response to a haredi Orthodox Jewish reporter who asked about the administration’s response to anti-Semitism, the president angrily replied, “I am the least anti-Semitic person that you have ever seen in your entire life,” going on to say, “I hate even the question.” (The reporter did not ask whether Trump was an anti-Semite.)

“It is honestly mind-boggling why President Trump prefers to shout down a reporter or brush this off as a political distraction,” Jonathan Greenblatt, the Anti-Defamation League’s national director, said in a statement posted on Twitter. The American Jewish Committee called Trump’s answers “worrisome and puzzling,” asking, “But if every such question elicits either no substantive response or, mistakenly, is taken personally, then what are people of good will supposed to conclude?”

So what are they to conclude? Here’s a range of responses from recent days to the question “Why won’t President Trump denounce anti-Semitism?”

Trump is a narcissist.

Peter Beinart, the liberal columnist who often writes on Jewish and Israel affairs, said the president took a general question from Thursday’s reporter — Jake Turx of the Orthodox magazine Ami — and made it personal. Tossed a softball question about how the administration planned to monitor and combat hate, Trump seemed intent on defending his own honor.

“The best way to understand it is as the product of narcissism so epic that it crowds out moral concern,” Beinart wrote. “Turx asked about Jewish fears of anti-Semitism. But the only thing that interested Trump was the possibility that people might consider him anti-Semitic. So he turned a question about Jewish victimization into a parable of his own victimization by a Jewish reporter.”

Beinart added: “The problem isn’t that Trump is anti-Semitic. It’s that he’s more upset by the charge than by the actual anti-Semitism growing around the country, some of which his supporters are perpetrating. He’s like the Breitbart-types who think whites suffer more from being accused of racism than African-Americans do from actually experiencing it.”

Trump believes he is under unfair attack.

Turx (a pen name) was willing to forgive the president for hearing his question as an accusation that the president was an anti-Semite, even though he carefully prefaced the question by saying Trump wasn’t an anti-Semite. The reporter stands by that assessment, and blames other media for putting Trump on the defensive.

“I understand why the president was so frustrated,” Turx told Jewish Insider. “It’s a very hopeful sign — it shows that he takes this matter very seriously, and it’s just regretful that it had come to a point where some of the media have been so dishonest that it is difficult for the Jewish community to get closure on this issue. But I remain very confident that because of his close connections with the community this will be addressed.”

Trump is playing to his lunatic fringe.

“Meet the Press” host and NBC News political director Chuck Todd wondered in a commentary if Trump is making a political calculation in refusing to issue a simple denunciation of anti-Semitism. During the campaign, Jewish groups and others pointed out the various times when Trump’s campaign was trafficking in symbols and themes that appealed to the so-called alt-right, whose coalition of economic nationalists, white supremacists and anti-Muslim alarmists includes its fair share of anti-Semites.

Todd asked: “Could it be because some of the president’s supporters aren’t as welcoming as he is and the president doesn’t want to insult or criticize them? That’s what some people are hearing. Could it be that the president needs and welcomes the support of this alt-right and some of the less enlightened people that reside there when it comes to what they think of people of the Jewish faith?”

If that’s the case, Bradley Burston wrote in the left-wing Israeli daily Haaretz, then Trump’s denials that he is an anti-Semite ring hollow.

“Here is a political animal with a superhuman sense for what and whom his followers want him to say, do and attack,” Burston wrote. “When he was out working the crowds, he knew in his bones that white supremacist anti-Semites saw him as their great hope. He fed them all the red meat he could dish out.”

Burston added: “A man who initiates, fuels and fans anti-Semitism, a man who is in a direct position to combat it and does not, is, in my view, an anti-Semite.”

Trump is a [Yiddish expletive deleted].

Trevor Noah of Comedy Central’s satirical “The Daily Show” didn’t delve into Trump’s political or personal motives in his commentary Thursday night. To him, Trump’s reluctance to denounce anti-Semitism boiled down to one word.

“Beyond’s Trump’s completely botched attempt at reassuring the Jewish community, what’s even more striking in that interaction is that you have a president of a democracy who thinks press is only valid when they ask him easy questions,” Noah said. “Questions that he likes. In fact, in his mind, he deserves it.

“‘What are you going to do about anti-Semitism?’ ‘We’re going to stamp it out.’ Done. That’s all you had to say. That was the softest ball possible, a matzah ball if you will. What a putz.”