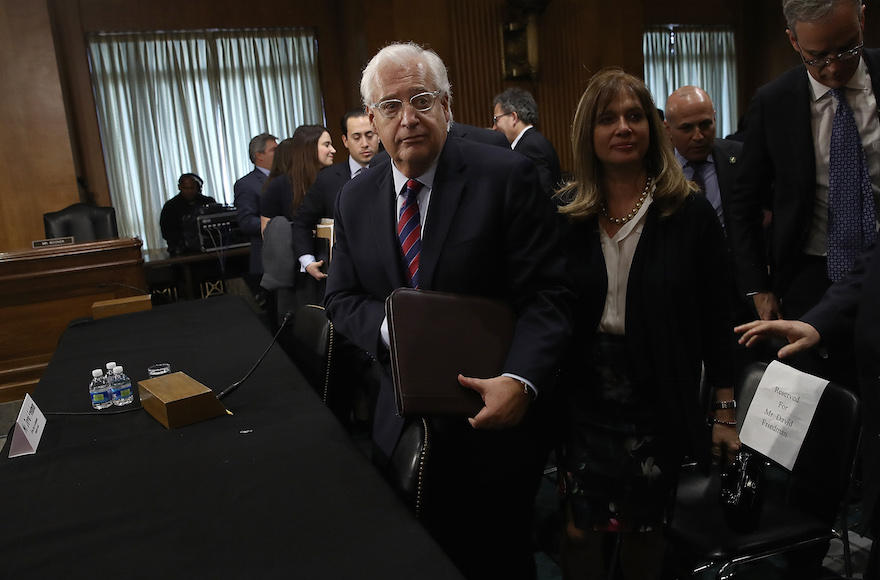 (JTA) — The Israel director of J Street rejected the expression of regret by David Friedman, President Donald Trump’s pick for ambassador to the Jewish state, for calling her group “kapos.”

Yael Patir maintained during an interview Friday with Army Radio that the regret expressed Thursday by Friedman for applying the term — the Nazi designation for Jewish helpers in the oppression and annihilation of other Jews — was neither sincere nor worthy of being considered a real apology.

Friedman in a Senate confirmation hearing said in his opening remarks that his past attacks were campaign rhetoric he would abjure as a diplomat. Pressed by Sen/ Ben Cardin, D-Md., who said that Friedman’s attacks predated Trump’s campaign and were over the top even during a campaign, Friedman said he “deeply regrets” the remarks.

“I provided some context for my remarks, but that was not in the nature of an excuse,” Friedman said during a Senate confirmation hearing. “These were hurtful words and I deeply regret them. They’re not reflective of my nature and character.”

Asked whether she accepted his apology, Patir said, “He did not apologize. He said ‘I used words I shouldn’t have.’ There’s a difference. There’s nothing accept or not accept.”

Friedman noted during his testimony that he had personally apologized to Jewish senators and organizations he had offended, naming the Reform movement, the Anti-Defamation League and Sen. Al Franken, D-N.Y. J Street’s president, Jeremy Ben-Ami, who was present at the hearing, noted on Twitter that J Street has yet to receive a similar overture. “Still waiting over here,” Ben-A,i said.

During the hearing Cardin pressed Friedman also about past statements that appeared to oppose a two-state solution addressing the Israeli-Palestinian conflict and noted his backing for settlements, including some deep inside the West Bank.

Friedman replied that he had been skeptical of a two-state solution, but would welcome any solution arrived at by the Israelis and Palestinians that ended suffering for both peoples.

On Thursday, the U.S. ambassador to the United Nations, Nikki Haley, said her country “absolutely supports a two-state solution, but we are thinking out of the box as well, which is — what does it take to bring these two sides to the table, what do we need to have them agree on?” she said.

The previous day, Trump at a White House news conference with Israeli Prime Minister Benjamin Netanyahu diverged with the official line of several previous presidents when he implied that he had no preference for that solution.

“I’m looking at two-state and one-state, and I like the one that both parties like,” the president said.

Patir, who began running the Israel activities of the liberal Middle East policy group in 2012, doubted Friedman’s sincerity, saying “He’d say anything to receive the confirmation.”

Her organization is among several left-of-center Jewish groups in the United States and in Israel fighting the nomination.

During the interview with Army Radio, Patir fielded critical questions about her organization’s pro-Israel credentials but provided no answer beyond saying she was not familiar with the cases cited and that she would study them.

One question concerned J Street pulling out from a 2014 Boston rally in support of Israel’s retaliatory strikes on Hamas in Gaza, which Haaretz reported on.

In informing the Boston Jewish federation of J Street’s decision to quit the rally, Northeast Regional Director Shaina Wasserman wrote: “There was no voice for our concerns about the loss of human life on both sides.”

Patir said “reports about J Street are often shaped by the political tendency of the media doing the reporting” and reaffirmed her organization’s “commitment to stand by Israel and stand up for its security.”

She was also asked to explain J Street’s stated objection to lobbying by the American Israel Public Affairs Committee for U.S. support for Israel amid rebuke over the slaying by Israel troops of nine Turkish pro-Palestinian activists aboard a Gaza-bound ship. The troops opened fire after being attacked by the activists.

Patir said she was not familiar with J Street’s response to the AIPAC push.

J Street President Jeremy Ben-Ami wrote in 2010 that AIPAC’s move was “primarily for domestic political consumption rather than to advance the U.S. interest.”