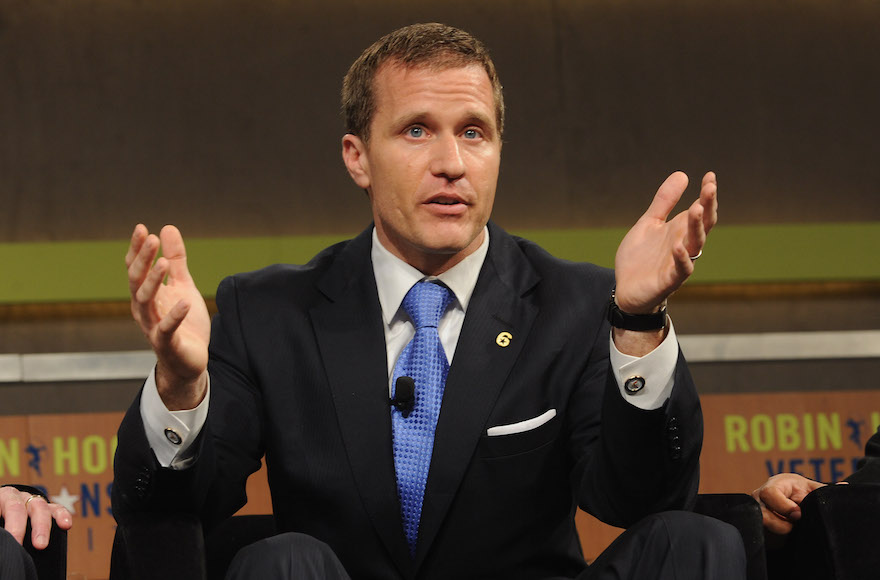 (JTA) — The Jewish governor of Missouri, Eric Greitens, said he will volunteer to help repair a St. Louis-area Jewish cemetery where at least 170 gravestones were toppled over the weekend.

Meanwhile, two Muslim activists have launched a crowdfunding campaign to raise $20,000 for repairs. The launchgood drive started by Linda Sarsour and Tarek El-Messidi had brought in $17,750 as of Tuesday afternoon.

They said any remaining funds after the cemetery is restored will go to fixes for other vandalized Jewish centers.

“Through this campaign, we hope to send a united message from the Jewish and Muslim communities that there is no place for this type of hate, desecration, and violence in America,” the activists wrote. “We pray that this restores a sense of security and peace to the Jewish-American community who has undoubtedly been shaken by this event”

Greitens in a news release Tuesday cited the concept of “tikkun olam,” or repair of the world, and asked helpers to bring rakes, garbage bags, wash rags and more cleaning supplies.

“My team and I will be there tomorrow, and I’d invite you to join us,” he said.

The governor had previously condemned the vandalism on the Chesed Shel Emeth cemetery in University City and called on people to “fight acts of intolerance and hate.”

“Disgusted to hear about the senseless act of desecration at the cemetery in University City. We must fight acts of intolerance and hate,” Greitens wrote in a tweet Monday evening after the vandalism was discovered.

Disgusted to hear about the senseless act of desecration at the cemetery in University City. We must fight acts of intolerance and hate.

The attack on the cemetery took place sometime between Friday night and Monday morning, when the damage was discovered.

Chesed Shel Emeth Cemetery Executive Director Anita Feigenbaum told The New York Times that between 170 and 200 headstones were toppled, with some being broken and damaged.

The headstones are in the cemetery’s oldest section, dating from the late 1800s to the mid-1900s, she told the Times.

“I just am quite shocked — it affects so many people, so many families, so many generations,” Feigenbaum told the newspaper. “This cemetery was opened in 1893.”

In an interview with the Huffington Post, Lt. Fredrick Lemons of the University City Police Department declined to classify the vandalism as a hate crime.

“Right now, everything is under investigation,” Lemons said. “We’re looking into all possible leads.” The police are reviewing cemetery surveillance cameras, according to the report.

Greitens, a former Navy SEAL whose military awards include the Bronze Star, was elected the first Jewish governor of Missouri in November.

In a post on Facebook he called the vandalism a “despicable act of what appears to be anti-Semitic vandalism.”

“We do not yet know who is responsible, but we do know this: this vandalism was a cowardly act. And we also know that, together, we can meet cowardice with courage,” he wrote. “Anyone who would seek to divide us through an act of desecration will find instead that they unite us in shared determination. From their pitiful act of ugliness, we can emerge even more powerful in our faith.”

Immediately following the announcement of the vandalism, the Chesed Shel Emeth Society, which owns the cemetery, posted a message on Facebook informing families with relatives buried there that it is  “assessing the locations and damage and will post names that are affected as soon as we are able. Many monuments are facing down and we won’t be able to read the names and see if there is any damage until we lift the stones.”

In an update Tuesday afternoon, the society said a local monument company had begun to replace the monuments on their bases. It said it would try to have a comprehensive list of the toppled monuments posted by Wednesday.

A local church, the All Nations Church, launched an appeal to help repair the damage caused by the vandals. The church said on its website that it would match up to $500 in donations to the cemetery.

“Destruction of Jewish headstones is a painful act of anti-Semitism,” said Nancy Lisker, director of the American Jewish Congress in  St. Louis. “We feel the pain of the families whose grave sites of loved ones were desecrated and look to the authorities to apprehend and bring to justice those responsible for this heinous act.”