In Budapest, Roma and Jews use alternative JCC to fight right-wing populism 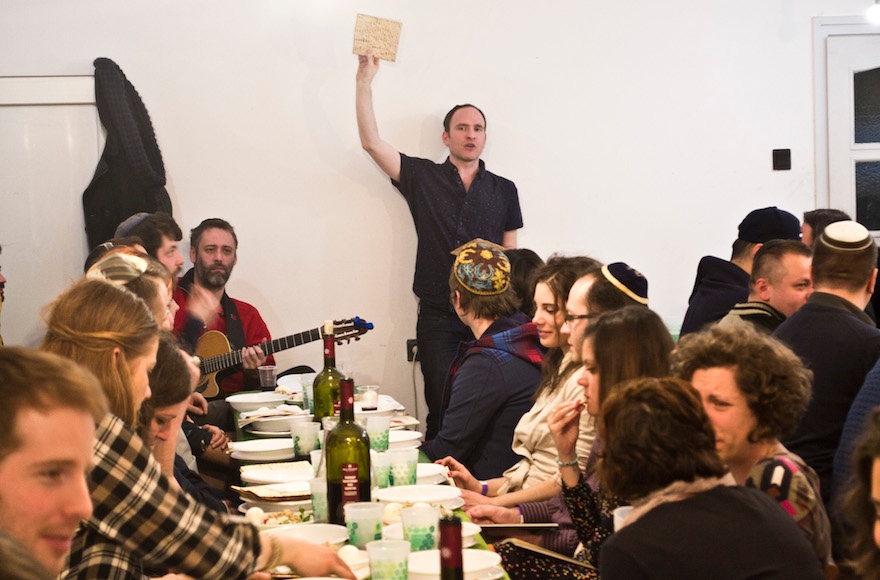 Adam Schonberger, standing, with other participants at the 2016 seder dinner at the Aurora Jewish community center in Budapest, April 22, 2016. (Courtesy of Marom)
Advertisement

BUDAPEST (JTA) — Although she lives in the undisputed nightlife capital of Central Europe, Andi Angelip knows of only a handful of bars here where she is truly comfortable bringing a date.

Angelip, a 19-year-old student and activist for lesbian and gay rights, said she avoids “rainbow” establishments that cater only to homosexuals. Yet in a country where violent far-right activists regularly intimidate gays and lesbians, she also avoids romantic situations in mainstream clubs.

“It’s not so comfortable to be a minority in a country whose politicians preach for discrimination on a daily basis,” she told JTA last month.

Two years ago, Angelip found at least one place where she does feel comfortable: an avant-garde Jewish community center called Aurora. Since its reopening in 2014 in a poor neighborhood of Budapest, it has become one of the city’s hippest coffee bars – and a major hub for social and opposition activists fighting the policies of Hungary’s right-wing government.

“I come here because it’s just a cool place, but also because I feel safe and comfortable here, like I belong,” said Angelip, who is not a part of Hungary’s Jewish population of approximately 100,000.

She is not the only minority rights activist who regards Aurora, a 6,500-square-foot center located in a small building in the crime-stricken 8th District, as a sanctuary from reality in Hungary. Critics of Prime Minister Viktor Orban’s government here say it is mainstreaming hate crime and Holocaust revisionism, as well as promoting censorship of the press.

Marom, the Jewish association that runs and owns Aurora as part of its outreach mission to young unaffiliated Hungarian Jews, provides office space and facilities to about a dozen non-Jewish activist groups committed to fighting these perceived trends. They include the Roma Press Center, Budapest Pride, the Migszol refugee advocacy group and the Zold Pok agency for social activism.

While Angelip and a female friend chatted over beer on a recent Monday in the Aurora bar – a cozy space with 1970s décor and music by the French protest singer Manu Chao — Marom’s staff of about 12 met in their upstairs office to review last year’s activities, including the group’s weekly Shabbat services in their small egalitarian synagogue and celebrations of Jewish holidays.

In addition to religious services, Marom also organizes educational activities in schools about the Holocaust, programs for street children, and cultural events like film screenings and experimental music concerts. It also hosts political discussions, such as a sold-out Jan. 30 debate on populism featuring László Majtényi, an outspoken critic of Orban.

“We work with non-affiliated Jews who would never go to a synagogue or even the Balint Center,” said Adam Schoenberger, the president of Marom, referring to the Jewish community center in central Budapest funded by the Joint Distribution Committee. “So we try to sneak Judaism into our programming, just to give them a taste and whet their appetite: a klezmer concert here, a Hanukkah candle lighting there.” 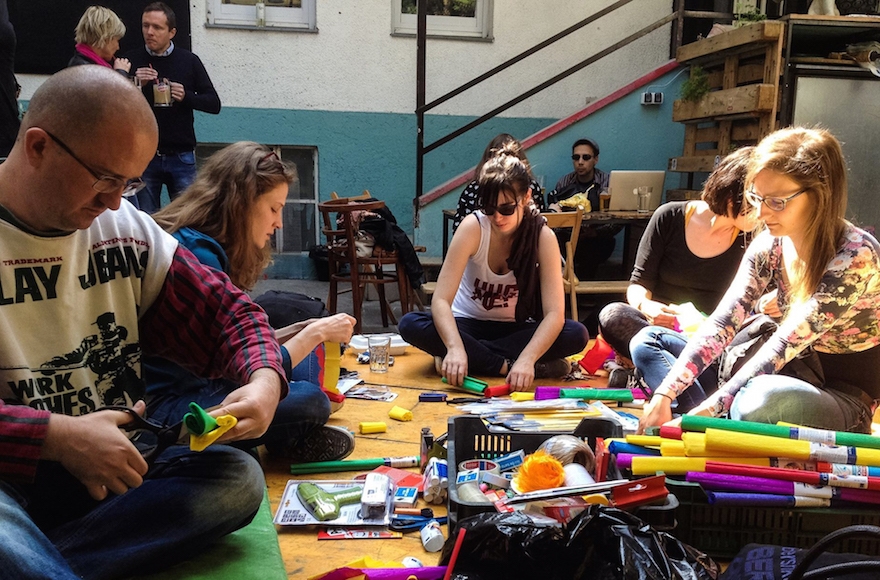 Activists preparing an educational activity at the Aurora center, April 23, 2016. (Courtesy of Aurora)

As Schoenberger talks to a visitor, in an adjacent room three activists from the Roma Press Center hammer out a strategy for covering the landmark trial at the European Court of Human Rights on the role of Hungarian police in allowing hundreds of rioters in 2012 to attack the home of a Roma family in the village of Devecser.

The court’s Feb. 8 ruling against the police  – one of hundreds of hate crimes against Roma, or gypsies, recorded annually in Hungary – was hailed by Amnesty International as a “drop of hope in a sea of fear.”

“Not only is the far right party, Jobbik, the third largest in parliament, but the ruling Fidesz party has drifter further and further in its negative attitudes towards Roma,” the group said.

Against this backdrop, and amid a government-led crackdown on independent media, the Roma Press Center is “the only outlet that will bring the news about assaults in the countryside to the few news portals that are still not muzzled by the government,” Schoenberger said. “We find it very important that they be a part of Aurora.”

The press center, a nongovernment organization with a shoestring budget, receives a significant discount on rent from Marom.

The cooperation with Marom revolutionized the work of the Roma center, which was founded in 1995, according to the organization’s president, Szilvia Suri.

“We were renting office space in the center before we came here,” she said. “It was more expensive but more crucially, we were isolated there, whereas at Aurora we are better connected not only to the other organizations working here, but to the many Roma people who live in the 8th District.”

The Jewish-Roma partnership at Aurora is unusual in a country where the two minorities rarely act in unison, according to Eszter Hajdu, a Hungarian filmmaker who has studied that relationship.

“While both groups encounter some xenophobia, the Roma are far more vulnerable,” Hajdu said. And while Jewish groups at times participate in educational and charitable activities to assist Roma, “I can’t say the Jewish community is the first one to offer help” to the other minority, she added. She also said that part of the problem are negative biases each group holds of the other in Hungary.

The discounts that Marom offered its partner groups last year on using Aurora facilities and utilities amounted to $25,000 — a substantial sum in a country where the average monthly salary is about half that of the United States. Marom generates 90 percent of its annual budget and receives the rest from donations by JDC, the UJA-Federation of New York, Masorti Olami and others.

Building an alliance of liberal groups would be unremarkable for a Jewish organization in most other Western countries. But in Hungary, it places Aurora squarely at the center of opposition to a government-led campaign to root out foreign-funded grassroots organizations that do not conform to the party line, and to significantly limit the work of nongovernmental groups to local funding only.

Officials from Orban’s Fidesz party have already vowed to root out the network of NGOs that receive funding from the liberal Hungarian-American billionaire George Soros, who is Jewish, and have limited the work of other groups with funding from Norway. Now, most other local groups with a progressive agenda are bracing for intervention by the government.

Marom has experience with such intervention.

In 2014, Budapest officials kicked the group out of its former site in the city center on a building safety pretext. The eviction notice came two days after opposition activists used the space to plan an anti-government sit-in.

It was one of several opposition activities hosted by Marom in recent years, including in the 2013 student protests. Marom’s previous site was also the birthplace that year of the LMP Green party.

Mazsihisz, the umbrella group of Hungarian Jewish communities, has objected in recent years to perceived attempts by the government to whitewash Hungarian authorities’ complicity in the Holocaust, including by celebrating known anti-Semites. But Mazsihisz has remained nonpartisan.

And with good reason, according to Slomó Köves, a Chabad rabbi and leader of the local EMIH Jewish group, which is not part of Mazsihisz.

The government funds Jewish community life with hundreds of thousands of dollars annually, supports Israel in international forums and protects religious freedoms, Koves said. And while “it can be argued that it needs to be firmer on anti-Semitism, progress is being made there, too.” Ultimately, he argued, Hungarian Jews are safer and more secure about their future than their brethren in France.

But for Marom, which began in 1998 as an apolitical group, the penchant for opposition activism is inescapable, according to Schoenberger.

This is partly because “most unaffiliated Jews in Hungary seem to be liberal,” he said. But ultimately, “our opposition activism owes to the government’s war on core Jewish values of tikkun olam,” a Jewish concept of “repairing the world” and helping the needy, Schoenberger said.

“We did not choose to become political,” he added. “But when the government is targeting the poor, the different, the foreign – then we have no choice.”

The Bonds of Life: Remembering those we lost during COVID-19