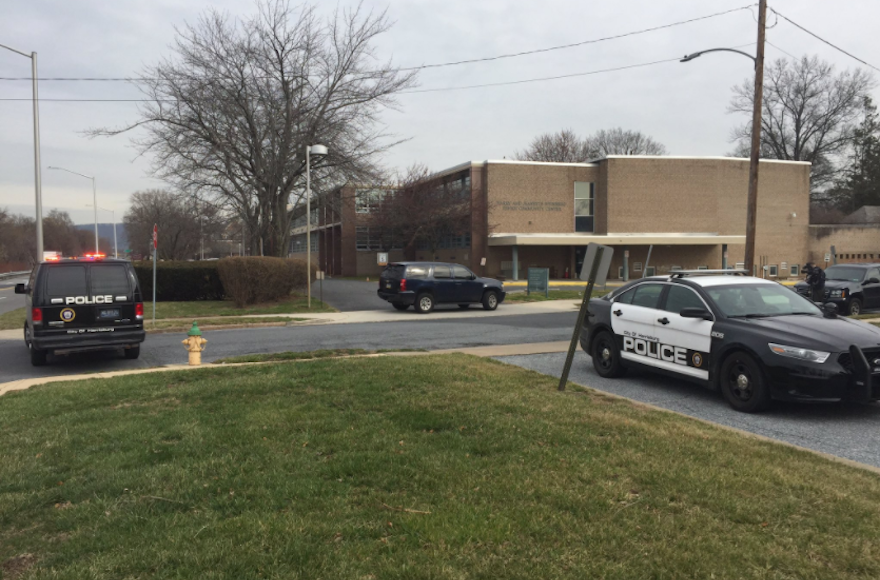 (JTA) — At least 21 Jewish community centers and Jewish day schools across the country received bomb threats on Monday in the latest wave of threats to hit Jewish institutions.

The incidents are the fifth wave of such threats in less than two months, in which 89 bomb threats have been called in to 72 Jewish institutions in 30 U.S. states and one Canadian province, according to the JCC Association of North America.

Among the affected JCCS on Monday are Asheville, North Carolina, and Davie, Florida, both of which were evacuated to local churches, as well as JCCs in York and Harrisburg, Pennsylvania; Indianapolis; Tarrytown and Staten Island, New York; Cherry Hill, New Jersey; Birmingham, Alabama; and Wilmington, Delaware. Jewish day schools in Rockville, Maryland; Fairfax, Virginia; and Davie, outside Miami, were also evacuated after receiving bomb threats. Institutions in Michigan and Rhode Island were also targeted.

All affected institutions were cleared and resumed normal operations as of the late afternoon, according to the JCC Association of North America.

Paul Goldenberg, director of the Secure Community Network, told JTA shortly after reports of the bomb threats began coming in that his organization was working closely with the Department of Homeland Security and the FBI to identify the perpetrators and stop the threats. SCN is an affiliate of the Jewish Federations of North America that advises Jewish groups and institutions on security. SCN also is working closely with the Anti-Defamation League, Goldenberg said.

Calling the continued threats “disturbing,” he said they are “impacting the lives of our communities out there.”

Updated list of bomb threats to Jewish Community Centers & day schools today — at least 16 in all. These are places where kids play & learn. pic.twitter.com/iYv9BLgBgc

Goldenberg also said the Jewish institutions are “behaving in an exemplary manner” in the wake of the threats.

“Our Jewish schools and our JCCs continue to train for this, continue to execute well-placed measures,” he said, going on to praise the staffs of U.S. Jewish institutions as being “vigilant.”

No actual bombs have been found at any of the dozens of institutions that have received bomb threats in recent weeks.

The JCC Association of North America urged federal officials to identify and capture the perpetrator or perpetrators of the hoaxes.

“Anti-Semitism of this nature should not and must not be allowed to endure in our communities,” said David Posner, director of strategic performance at the JCCA, in a statement. “The Justice Department, Homeland Security, the FBI, and the White House, alongside Congress and local officials, must speak out – and speak out forcefully – against this scourge of anti-Semitism impacting communities across the country.