In the age of Trump, a quandary for Jewish leaders: Access or resistance 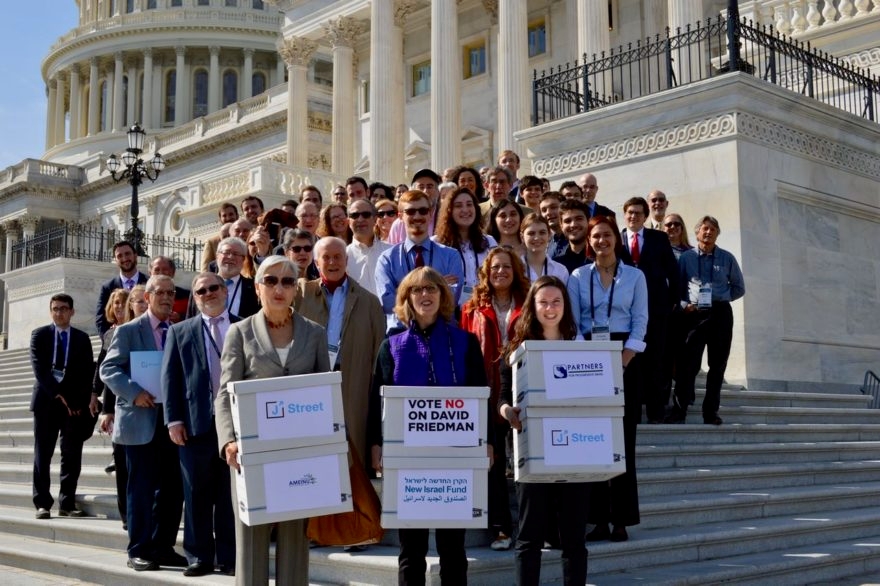 J Street activists deliver a petition to the Senate on February 28 2017 opposing then nomination of David Friedman as ambassador to Israel. (J Street)
Advertisement 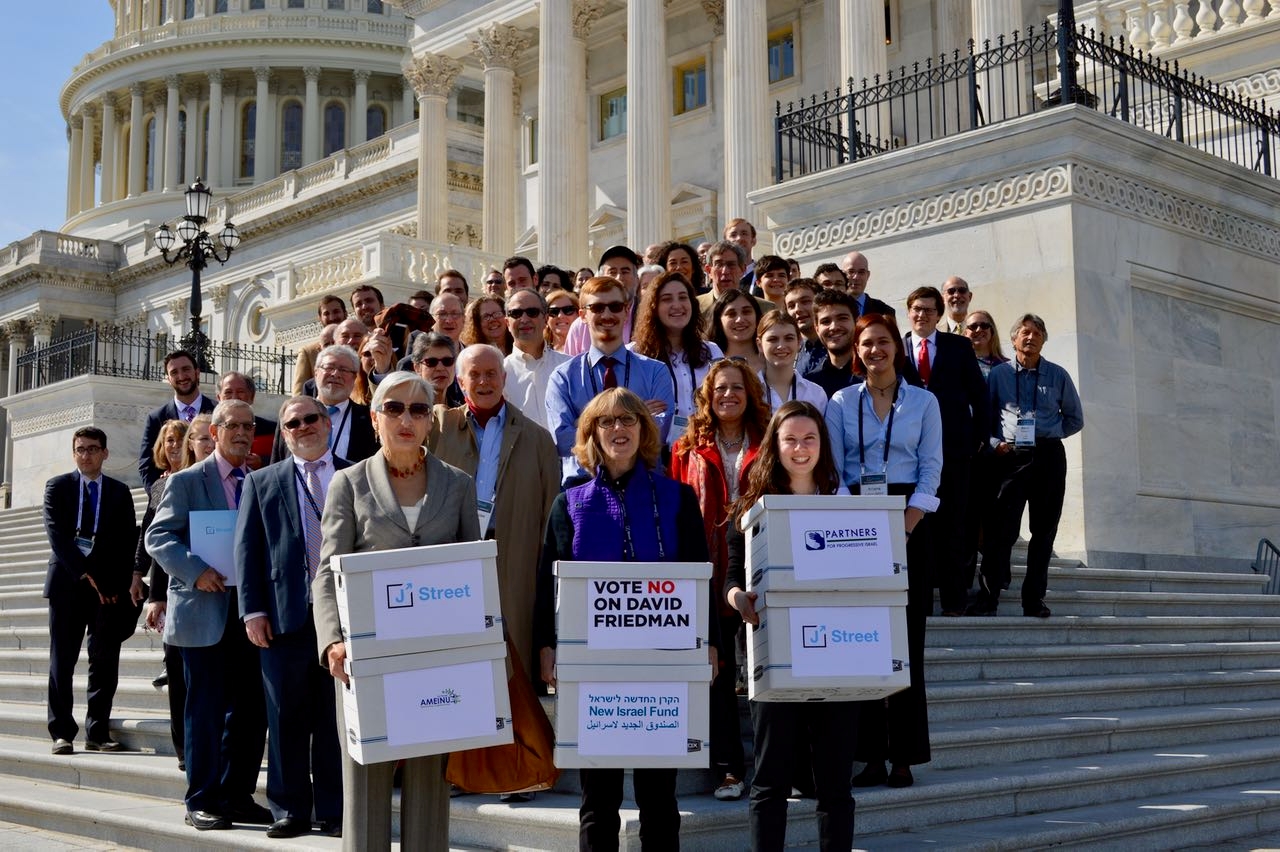 J Street activists deliver a petition to the Senate opposing the nomination of David Friedman as ambassador to Israel, Feb. 28, 2017. (J Street)

Downtown D.C. is pleasantly people-free on weekends, and the weather, weirdly unseasonable, was mild, so traipsing back and forth wasn’t a problem. A denizen of one of the country’s establishment Jewish groups encountered a reporter on one such trek, just outside the Capital Hilton, where the JCPA was convening.

You must be the only person attending both, the denizen said to the reporter.

Not even close: There were many more folks than just reporters walking from 16th to 9th Street in Washington’s Northwest quadrant.

They were also traversing a difficult journey, from a reflexive propensity to engage with a sitting president to joining the resistance against him — one that Jewish leaders say has been necessitated by a Trump administration shattering norms. And Jews who once reflexively backed the government of Israel when it came to the country’s security were more receptive to hearing J Street’s case for critical support.

At its wrap session on Tuesday, David Bernstein, the president of the consensus-driven JCPA, asked a panel “whether we should embrace the notion that it is our role to hold the center.”

There was dry laughter from the assembled 150 or so professionals in the room, many of them directors of Jewish community relations councils.

Nancy Kaufman, the CEO of the National Council of Jewish Women, noted that three-quarters of the Jewish community did not vote for Donald Trump. That was true for other Republicans, she said, but Trump was different: His hostility to the media, his executive orders targeting refugees, the spike in anti-Semitism on his watch — and his seeming reluctance to denounce it – were signs that this was not a normative presidency.

“If being in the center means we’re supporting the duly elected president, we’ve got a problem,” she said. “The challenge right now is a challenge to our very essence and our Jewish values.”

The problem Kaufman outlined was one that caused a degree of consternation among JCPA attendees and considerable enthusiasm among the 3,500 or so activists attending J Street’s conference at the Washington Convention Center.

“J Street is raising a flag saying we can be a political home at a time when the vast majority of Americans do not agree” with the administration on an array of policies, Jeremy Ben-Ami, the group’s president, said in an availability with reporters.

To that end, Ben-Ami laid out areas where J Street would stand in opposition to Trump: On its traditional issues, including advancing the two-state solution to the Israeli-Palestinian conflict and defending the Iran nuclear deal reached by the Obama administration, and also in areas the group has only taken up since Trump’s election, including his ban on the entry into the United States of refugees and travelers from seven Muslim-majority nations.

The J Street conference, titled “Defending our values, Fighting for our future,” included speaker after speaker challenging the American Jewish establishment, not just in Middle East policy — the area J Street staked out when the lobby was established in 2008 – but more broadly.

They excoriated the Jewish establishment for failing to step up against Trump’s broadsides against minorities like Muslims and Latinos (although to be fair, some centrist groups, particularly the Anti-Defamation League, have been outspoken in these areas).

Daniel Sokatch, the director of the New Israel Fund, a clearinghouse for fundraising for civil society groups in Israel, said on one panel that the Jewish community lost sight of what’s important by focusing so intently on the boycott movement targeting Israel and on figures like the Palestinian American activist, Linda Sarsour, who in the past has attacked Zionism. He noted that Sarsour, an organizer of last month’s massive women’s protests, asked a liberal Zionist, Rabbi Sharon Brous, to speak at the flagship Washington event.

“Our Jewish community has been so focused on [BDS and Sarsour], we’ve allowed actual anti-Semites to access the West Wing,” Sokatch said, alluding to the “alt-right” favorites surrounding Trump led by his chief strategic adviser, Stephen Bannon.

Groups present at the J Street conference represented an array of issues that while on the liberal side of the spectrum were more diverse than in the past: immigration (HIAS), student life (Hillel International), religious freedom (the Reform movement) and women’s rights (NCJW).

Thomas Friedman, The New York Times columnist, who while moderating a panel alluded to the event’s challenge to the establishment by calling participants the “Conference of Presidents of Not So Major Jewish Organizations.”

In training sessions, J Street activists said that Trump’s America was attracting liberals who might otherwise be wary of the group’s approach to the Middle East. J Streeters who marched in the women’s marches described forging alliances with women who had once shunned the group.

Nancy Becker, a J Street activist from Portland, Oregon, said she found a newly receptive audience in a Democratic congressman whom she would not name who was seeking avenues to undercut Trump.

“I showed him a way to go up against Trump” by embracing J Street postures, she said. “Before, he may have reflexively gone to AIPAC,” the more mainstream Israel lobbying group.

Ben-Ami, who in the past has avoided directly challenging the American Israel Public Affairs Committee, was in a bring-it-on mood, noting that its conference would take place in a month in the same venue.

“If Trump goes into AIPAC in a few weeks as he did last time and gets standing ovations,” he said, referring to Trump’s appearance last year as a candidate, “yet 75 percent of American Jews are horrified, it’s going to be hard for that 75 percent to feel comfortable with AIPAC.”

That may be premature: AIPAC, in a rare move, excoriated Trump at the time for his barbs about then-President Barack Obama and since then has focused on cultivating Democrats rattled by eight years of Obama’s tensions with Israeli Prime Minister Benjamin Netanyahu. Vice President Mike Pence, not Trump, is expected to address AIPAC.

Yet for all the talk of resistance, there was an elephant absent from the room: access. In the past, J Street has attracted top-notch Israeli politicians — at times from Netanyahu’s Likud Party – because it was the group with ins into the Obama administration. Now it was on the outside looking in and had little to offer other than resistance.

A key resistance area was opposing the nomination of David Friedman, the Trump lawyer who has called J Street “worse than kapos,” as ambassador to Israel. There was resignation at J Street to his confirmation, but also determination to make clear that he was not acceptable to a hefty portion of the Jewish community. J Street activists dropped off a petition at the Senate with 40,000 signatures opposing the nomination. The NCJW’s Kaufman said she declined to participate in a recent Presidents Conference Israel tour only because some participating organizations backed Friedman.

Alan Solow, an Obama backer who for a period chaired the Presidents Conference, counseled engagement should Trump veer back toward the two-state solution (he recently came out as an agnostic). So did Ben-Ami.

Talk of access may be quixotic, if not delusional. Trump may indeed press forward for two states, but his administration is freezing out most Jewish groups seeking access. Kaufman said that under other presidents, Jewish groups would reach out to an administration’s Jewish liaison to address incidents like the recent spike in threats on Jewish community centers and vandalism in cemeteries.

She turned to Bernstein: “Do you know who that is?”

Bernstein rejoined, “I don’t think there is one.”

Indeed, JCPA said Jared Kushner, Trump’s son-in-law and his point of access on Jewish issues, did not respond to multiple requests from JCPA to speak, according to the organization. The White House did not respond to a request for comment.

That might have been for the better, according to Jewish officials at the JCPA conference. Kaufman said she would have given Bernstein “heat” had Kushner appeared, and Jeremy Burton, the Boston JCRC director, said the Trump administration included officials who should be considered acceptable and others who should be considered unacceptable to the American Jewish community.

“We should not be normalizing bringing in people from alt-right media,” he said, alluding to Bannon, the former head of Breitbart News, “or from the family of the president.”

Barry Shrage, the president of the Combined Jewish Philanthropies of Boston, pushed back at the J Street conference against talk of isolating Trump and his acolytes.

“In every synagogue, there are going to be people who like Mr. Trump,” he said. “We need a little bit of forbearance here, we need to not demonize.”

Brous, who founded IKAR, a Los Angeles congregation that seeks to engage younger Jews, said in an interview that Trump’s agenda essentially discarded the old rulebook regarding engagement even with those with whom you disagree.

“Do you stay silent and play by the rules of a defunct playbook, or do you resist?” she asked.

At J Street certainly – and increasingly at JCPA – the inclination was toward resistance. The theme of the JCPA event was civil rights and reviving the black-Jewish alliance – a framing planned well before anyone thought Trump would be elected, and spurred by the turmoil that gave rise to the Black Lives Matter movement and concerns that younger generations in both communities were drifting apart.

Still, the talk at the JCPA sessions was about the challenges specifically posed since Trump’s election.

“We came into being as an organization in response to racialized violence, ethnicized violence,” said Cornell Brooks, the NAACP president, addressing the JCPA.

Brooks recalled the shared origins of his group and the Anti-Defamation League, both established at the launch of the 20th century in response to lynchings.

“Here we are in 2017 still responding to racialized, ethnicized violence,” he said.