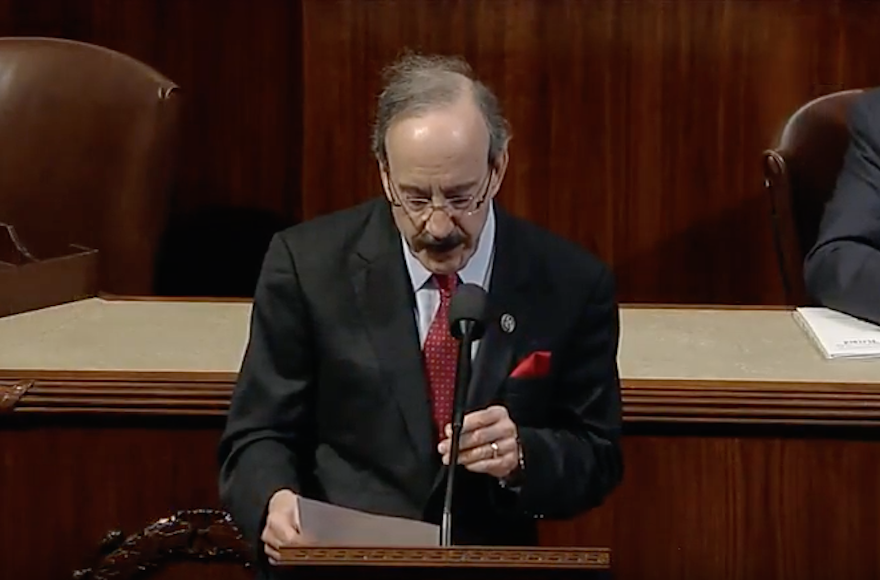 WASHINGTON (JTA) — For the first time in nearly three decades, Rep. Eliot Engel will not position himself to shake the president’s hand at a joint meeting of Congress, citing Donald Trump’s slowness to comment on threats to Jews, among other reasons.

‘I’ve decided not to stand on the aisle of the House chamber to shake the president’s hand during this joint session of Congress, as I have done in the past through Democratic and Republican administrations alike,” the Jewish New York Democrat said in remarks delivered Tuesday on the floor of the House of Representatives. “This will be the first time during my 29 years in the House that I’ve made this decision.”

Engel, the ranking Democrat on the House Foreign Affairs Committee, said he respected the institution of the presidency but did not feel that respect reciprocated by Trump.

“The president has attacked the free press by calling it the ‘enemy of the people,’” said Engel, who is known as the Democrat most likely to seek bipartisan support for his initiatives. “He’s rejected America’s traditional role welcoming refugees, which have helped to make our country great. He’s cozied up to [Russian President] Vladimir Putin, the strongman who attacks our democracy. He’s moved to gut the Affordable Care Act and looked the other way when threats against the Jewish community have increased in [the] recent year.”

Trump’s White House last week strongly condemned a wave of bomb threats against Jewish community centers, but only after Trump rebuffed several questions about the rise of anti-Semitic incidents. On Monday, the White House spokesman condemned another wave of JCC bomb threats and the vandalism against two Jewish cemeteries.

Engel’s handshake and brief exchanges with presidents, launched in his first year in Congress in 1989, have become a hallmark of State of the Union watchers. He stakes out a seat on the floor early in the afternoon of a speech, and in recent years has conducted his work from a smartphone.

For a number of years, he was joined by former Rep. Jean Schmidt of Ohio, a conservative Republican, in what both said was a deliberate display of bipartisan civility and comity.

Trump’s speech scheduled for Tuesday night is technically not a State of the Union; those addresses are not delivered immediately after an election. Most presidents have considered a second speech so soon after their inauguration to be redundant. However, like his predecessor, President Barack Obama, Trump has opted to give a speech after an election to outline in further detail his priorities to Congress.