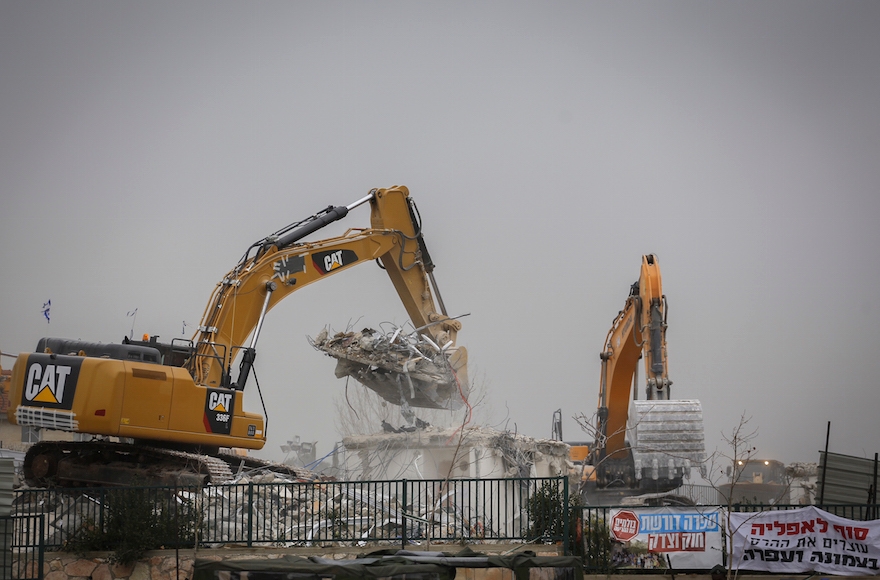 JERUSALEM (JTA) — Hundreds of Israeli police officers completed the evacuation of nine homes slated to be demolished in a West Bank settlement.

Bulldozers moved in late Tuesday to start the demolitions of the homes in Ofra, which were ordered razed by Israel’s Supreme Court after it was determined they were built on Palestinian-owned land. The evacuation of the settlement was completed Wednesday ahead of a March 5 court-ordered deadline for tearing down the homes.

Eight of the nine houses had been evacuated mostly peacefully on Tuesday. Officers led tearful residents and protesting teens from the homes, which had already been emptied by the owners of their possessions.

The ninth building, which had been filled inside and on the roof with protesting youths, was evacuated by noon Wednesday, after which demolition also began.

In total, 15 protesters were arrested and 21 police officers were lightly injured, Ynet reported.

On Monday, the Supreme Court denied a request to seal the homes rather than demolishing them. The court also determined that the arrangements law, which legalizes West Bank outposts built on private Palestinian land, does not apply to these homes.