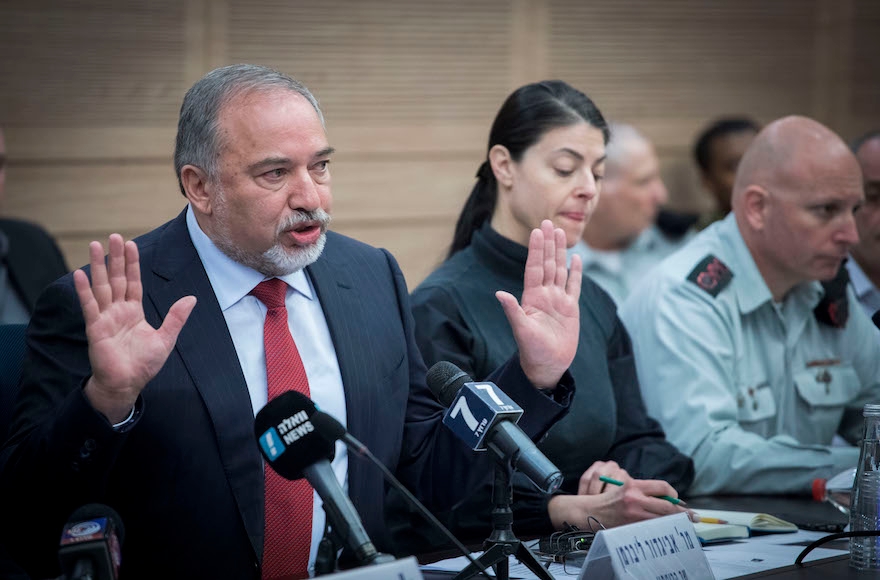 JERUSALEM (JTA) — Annexing the West Bank will lead to a “crisis” with the Trump administration, Israel’s Defense Minister warned.

“I am saying it as clearly as possible: We received a direct message from the United States saying that Israeli sovereignty over the West Bank would mean an immediate crisis with the new administration,” Avigdor Liberman said Monday during an appearance  before the Knesset’s Foreign Affairs and Defense Committee.

Liberman called on the ruling government coalition led by Prime Minister Benjamin Netanyahu to “clarify very clearly, there is no intention to impose Israeli sovereignty.” Liberman is due to meet with top U.S. administration officials this week in Washington.

The warning came in response to an interview over the weekend with Likud lawmaker Miki Zohar, who told the Israeli news channel i24 News that a two-state solution to the Israeli-Palestinian conflict is no longer possible.

Liberman said the interview raised red flags around the world. “I’m getting calls from all of the world wanting to know if this is the position of the coalition,” he told the Knesset committee. “As far as my opinion is concerned, we need to separate from the Palestinians and not to integrate them. The decision to annex Judea and Samaria (the West Bank) would mean the integration of 2.7 million Palestinians in Israel.”

U.S. President Donald Trump has not called specifically for a two-state solution to the Israel-Palestinian conflict. When asked about the topic last month during a news conference in Washington with Netanyahu, Trump said: “I like the one the two parties like … I can live with either one.”

Trump’s position diverges with that of previous U.S. presidents, who said two states was the only viable solution for resolving the conflict.