Brian Federman, a lifelong member of the JCC in West Hartford, Conn., sends his daughter to the preschool there. While the bomb threats that have hit JCCs nationwide have shaken her routine, Federman says he and his wife are not considering withdrawing her. (Courtesy of Federman)
Advertisement

(JTA) — When Cincinnati’s Mayerson Jewish Community Center was hit with a bomb threat on Jan. 18, Adam Bellows was satisfied with how the staff handled the preschool kids, including his two-year-old son.

The kids, said Bellows, had no idea the threat had happened. They were evacuated and taken to a secure location where they watched cartoons.

But after he got home, Bellows’ son started having a tough time. He couldn’t sleep, and was scared to return to preschool the next day.

“It was hard to see how much it disturbed him,” Bellows said. “He wasn’t scared at the time or anything, but the next day he was saying, ‘I don’t want to go to the JCC.’ He kept asking, ‘Are we going to watch Mickey Mouse again? Is mommy going to come pick me up again?’ His world was interrupted.”

More than 100 bomb threats have targeted JCCs, day schools and other Jewish institutions, coming in six waves since the beginning of the year. The latest wave, on Tuesday, targeted more than a dozen locations — including JCCs, schools and offices of the Anti-Defamation League.

While many JCCs report that members and preschoolers are staying put, there have been some exceptions. The Roth Family JCC near Orlando has seen 50 children pull out, according to reports that JTA has confirmed with a source who has knowledge of the matter. In Birmingham, Alabama, where the JCC has been targeted four separate times, six families have withdrawn their children.

Parents who spoke to JTA were happy with how the centers have handled the threats. The kids have returned promptly to their programs, and business has been able to carry on as usual.

“She wasn’t scared, she wasn’t worried,” said Matt Mandel, 39, of his four-year-old, a preschooler at the JCC in Rockville, Maryland, which was threatened on Jan. 9. “They did a great job of keeping everyone calm and not getting them scared unnecessarily. I feel very, very comfortable with it. There’s only so much you can do.”

And yet despite appeals from JCCs for calm and defiance, the repeated bomb threats have taken their toll. The Orlando JCC is holding an online fundraiser Wednesday, called “#ThenNowAndAlways,” whose donor pitch says that, in light of “challenges greater than we expected,” this year “it will take significant effort just for us to break even.”

An open letter to President Donald Trump, signed by all 100 U.S. senators, urged specific action on anti-Semitism and alluded to the fiscal pressure on JCCs. 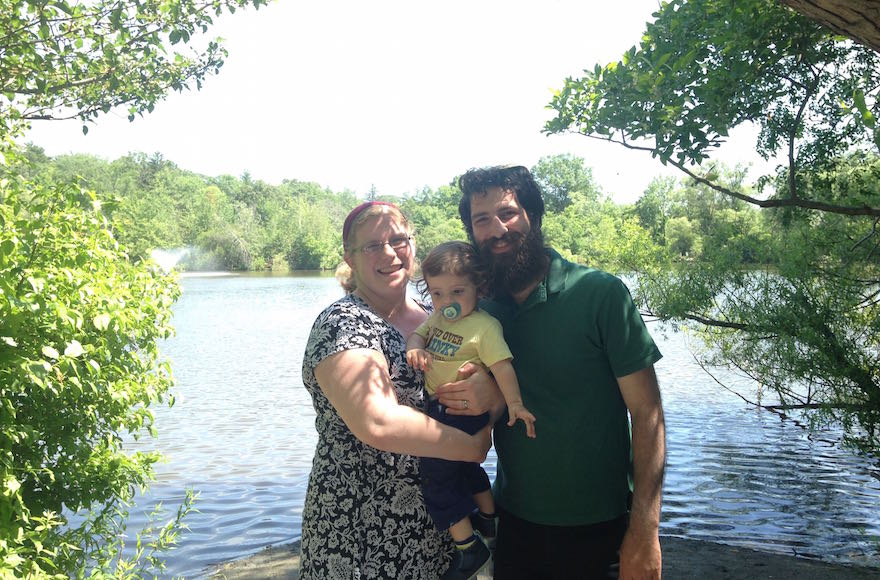 Sam Zerin, with his wife Rabbi Rachel Zerin and their son, said the JCC bomb threats recalled an anti-Semitic threat his middle school received when he was 13. (Courtesy of Zerin family)

“We are concerned that the number of incidents is accelerating and failure to address and deter these threats will place innocent people at risk and threaten the financial viability of JCCs, many of which are institutions in their communities,” the Tuesday letter said.

Even among parents who are keeping their kids in JCC preschools, the bomb threats are creating stress in a place meant to be immune from danger. Even as their kids remain unaware of the calls, they’ve resulted in scenes of cribs being pulled outside, and law enforcement officials investigating campuses. Last month, the Anti-Defamation League put out a brochure titled, “5 Tips for Talking with Children about Bomb Threats at Jewish Community Centers.”

While the threats have all been hoaxes, the disruption and inconvenience are having an impact on members and parents who might have other options.

In the wake of the threats, some JCCs have upped security, posting guards, hiring security coordinators or limiting access to the building. JCCs have sent parents a series of emails and text messages updating them on the threats and responses, and have held community meetings to address concerns.

Others are wary of becoming less welcoming by “hardening” their facilities, and undermining the purpose of a community center.

“While they are responding well to some of these concerns, they’ve stuck to this theory, which in my opinion is a little head-in-the-sand, that we’re an open facility, we’ve been that way for 100 years, we’re going to stay that way,” said Brian Federman, a lifelong member of the West Hartford JCC, which received a threat on Jan. 18.

David Jacobs, the West Hartford JCC’s executive director, told JTA the center’s staff is trained to respond to a variety of threats, and is aware of everyone who enters and leaves the building.

Despite his complaints, Federman says he and his wife have “not at all discussed pulling” their daughter out of the preschool. Other parents agreed, and said they view JCCs as a local hub they don’t want to abandon.

“It’s really troubling, and really scary, but we live at that center,” said Nurit Friedberg, whose 2-year-old daughter goes to preschool at the JCC of Greater Columbus. “Whether we’re exercising or swimming, we’re there six days a week. She loves her school. We live there, and the idea of avoiding it doesn’t occur to me.”

Several parents weren’t shocked when anti-Semitism came to the JCC. Sam Zerin, the parent of a 22-month-old at the JCC in Providence, said the Feb. 27 bomb threat there reminded him of an incident from his childhood.

When Zerin was 13, anonymous threats arrived at his Indiana public school promising a mass shooting of Jews on Adolf Hitler’s birthday. While the shooting didn’t happen, students had to participate in response drills, and Zerin skipped school that day. He said the incident taught him that anti-Semitism, even at school, is part of being Jewish.

“On the one hand, it’s like, ‘Oh my God, how is this happening,’” Zerin said. “On the other hand, it’s like some things never change, and life goes on. Life has to go on. To a certain extent, I don’t want to give the anti-Semites what they want.”