Billy Crystal on why he loves being Jewish 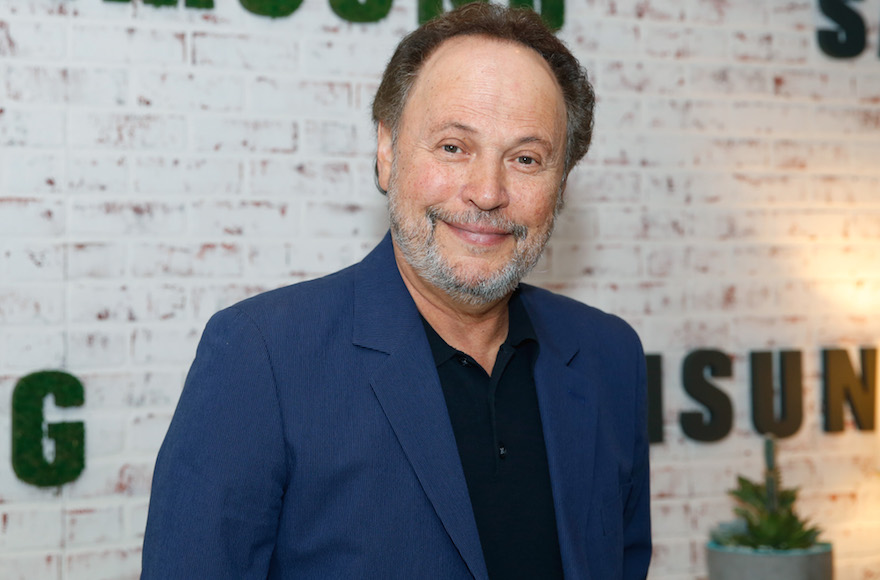 (JUF News via JTA) — The inimitable Billy Crystal is back on the road. The six-time Emmy Award-winning comedian, actor, producer, director and writer — most recently of a book of essays, “Still Foolin’ ‘Em: Where I’ve Been, Where I’m Going, and Where the Hell Are My Keys” —  is currently touring the U.S. with his new show, “Spend the Night with Billy Crystal.”

The show, scheduled to tour through April, promises to feel like an intimate chat with the audience  — a blend of standup with a “sit-down” interview with Crystal, moderated at many shows by comedian and actor Bonnie Hunt. Crystal, who lives in Los Angeles, will tell stories, talk about the world as he sees it, reflect on his life and show some film clips from his long career.

Of course, the popular nine-time Oscar host has numerous iconic films and roles to choose from: The title character in the quintessential rom-com “When Harry Met Sally;” the grouchy “miracle worker” in “The Princess Bride;” Mitch, a New Yorker heading toward a midlife crisis who goes on a cattle drive with his buddies in “City Slickers;” and in “Analyze This,” a shrink to Robert De Niro’s mob boss.

But before he was charming millions, Crystal, 68, was entertaining his family and friends while growing up in the quaint beach town of Long Beach, New York. Then a predominately Jewish and Italian town, Crystal describes it as the “perfect place to grow up.” He often references his beloved hometown in his act, and in the aftermath of Hurricane Sandy’s battering of New York in 2012, Crystal and his wife of nearly 47 years, Janice, helped raise more than one million dollars to help Long Beach rebuild and rebound.

Crystal’s early childhood, back in the 1950s, was filled with music and laughter. His mother, Helen, was a talented tap dancer and singer. His father, Jack, worked six days a week at two jobs — as a jazz promoter and manager of the family’s popular New York City record store. Jazz greats like Billie Holiday — who were friends of his parents — would frequent their home.

Crystal and his dad would spend most Sundays together watching baseball games. Their relationship was chronicled in Crystal’s Tony Award-winning one-man show “700 Sundays” (also adapted into a book and HBO special), named for the number of Sundays he spent with his father before his dad died of a heart attack when Crystal was only 15.

The only thing Crystal ever aspired to do as much as comedy was play baseball for his beloved New York Yankees — in fact, he says the highlight of his long career came in 2008 ,when he signed a one-day contract with the team in honor of his 60th birthday.

In a phone interview with JTA, Crystal looked back on his family, his Jewish identity, his long career and the “one thing” that keeps him going.

JTA: You seem to be a celebrity who wears your Judaism as a badge of honor, and not in a self-hating sort of way. Would you agree?

Billy Crystal: I do. I mean, I still make fun, but it’s not about Jews — it’s about my Jews, it’s about my relatives. It’s not generalizations.

What are some of your favorite parts about being Jewish?

You mean, besides the circumcision?

You remember that, huh?

Yeah, oh yeah, that’s why I’m an insomniac. I’m waiting for that guy to come back in the room.

What else do you love about being Jewish?

The storytelling, the warmth, the sense of humor. My dad was strict about the holidays. We honored them, we went to temple. I like the ritual, and the caring for our planet that’s written into so many of the works I read in Hebrew school.

How do you compare when you were just starting out in showbiz 4o-plus years ago to touring with your new show today?

It all feels the same. I don’t think I’ve stopped working since the eighth grade. Backstage, when I was on Broadway, felt the same as it did backstage when I was getting ready to do a school play in high school. It’s that same energy of confidence, a little bit of nerves … The moment you go out, you release and say, ‘OK, I’m ready, here I come.’ It’s kind of an intoxicating feeling to go out and entertain people.

That’s why, after all these years, I’m going back on the road with this show … At this age and this point in my career, to still have the hunger I did as a young man is a great feeling.

Besides signing to a one-day contract with the New York Yankees, what’s another of your proudest professional achievements?

I was the first American comedian to perform in the Soviet Union back in 1989 in an HBO special called “Midnight Train to Moscow.” It was a Russian-speaking audience [with] some Americans. Gorbachev was in power, the [Berlin] Wall had not come down yet, and [I felt honored] that HBO trusted me. I found all these relatives that I didn’t know I had there [in Russia]. But performing there and being an ambassador, if you will, for American humor in that country is something I look back on with great pride.

What did your father teach you during those “700 Sundays,” before he passed away?

Besides teaching me a love for comedy, a love for reading, a love for baseball, he also taught me about doing the right thing. My dad was a civil rights giant in his own quiet way, in that he was one of the first promoters to integrate jazz bands. So the house, yes, was filled with Jewish relatives with stories, but sitting next to them was Zutty Singleton, who was a great jazz drummer, or Tyree Glenn, who was Louie Armstrong’s trombone player, or any of these other great musicians. They were all just friends. My family label — Commodore Records — produced “Strange Fruit,” which is Billie Holliday’s epic song about lynching. It took a Jewish family to produce that record, to write that song.

How did your father’s premature death shape your life and your relationship with your mother?

I was 15 and was dealt a bad hand. You can’t help but be angry, and I was angry and had to learn to live with that, and to deal with my mother, who was suddenly widowed and forced back into the workforce. [Being] back home alone with her, while my brothers were away at college, made me grow up really fast. I admired her strength — at the age of 50 she was suddenly back in the workforce. Three sons in school and we all graduated college because of her. You watch that and learn what parenting is really about, and what being a son is really about. My mom sent me on a path of trying to do the right thing in my life and also valuing every moment that you live.

What’s your secret to your happy, healthy and long marriage?

We still feel that we’re dating. After all these years, and all the things that we’ve been through, and all the joys and sadness that we’ve shared together — right from the beginning: You’re 18 and you have to tell the in-laws [that] you’re going to be a comedian.

But Janice’s faith in me, her trust in me, her strength when things aren’t going well. Our key is we keep laughing, we keep talking and we keep loving.

I’m going to remind you about a scene from your own movie, “City Slickers.” Curly, a cowboy, asks your character, Mitch, if you know the secret to life. Then, Curly holds up one finger and says “One thing.” What I took Curly to mean is that each of us have to find that one thing that give our lives meaning. What is that one thing, or maybe a couple of things, that give you purpose?

The purpose is Janice and the kids, and continually doing right by them and right by myself. That’s the most important thing … and in my job, I have a purpose. I have a mind that still loves to create and I follow that deeply.

Cindy Sher is the Executive Editor of Chicago’s JUF News.